The Universe and Everything

This week marks the lighting of the fire (as it were) under the Large Hadron Collider on the border between France and Switzerland. I have mixed feelings about this event for several reasons.

First of all, it could have been us, here in North Texas, whacking atoms together and discovering all manner of stuff about the origins of the universe. Back in the 90s, the Super-conducting Super Collider was being built just south of Dallas (in the town of Waxahachie, which, rather ironically, sports even more nineteenth-century houses than McKinney does). But the gummint (the Clinton administration and Congress, to be specific) pulled the plug when it looked like the budget would exceed 12 billion bucks. (Now that's an earmark. But I'm not convinced it was pork.)

In one sense, this is one more example of how short-sighted we tend to be as a nation, and one of the problems with the kind of immediate-results capitalism we practice. If it's not going to show a profit in six months, we ain't doin' it. Long-term investment is for old fogeys and ivory tower intellectuals. Bring on the day-traders and the stock-market gamblers (and the sub-prime mortgage racketeers), but don't invest in the future unless somebody guarantees that it will lead to big bucks, real soon. Don't ever do anything purely for the sake of science or understanding.

Of course, we don't teach science properly in schools, either, which is why we couldn't get anybody fired up about the Collider and its potential for answering all manner of questions about the beginnings of life, the universe, and everything (the answers probably being somewhat more complex than "42"). I'm pretty sure I'm the only person I know with a picture of the guts of the LHC displayed on my desktop as wallpaper. And I really don't know squat about physics.

But I know enough to maintain some trust that these guys know what they're doing. I hung around with a number of Nobel-prize-winner-spawn at Penn (in addition to the fact that my former father-in-law edited Physical Review Letters and I saw a lot of high-powered physicists in action), and these guys knew their stuff. They were, even back in the seventies, talking about what we might learn from developing an instrument that could smack particles together at enormous speeds and create--what?

Here was the problem, to me: uncertainty. And I don't mean in Heisenberg's sense. I mean in the sense of "are we really wise enough to pull this off without destroying life as we know it?" Human beings are capable of magnificent flashes of intellectual power; but we can also be almost irretrievably stupid. We are capable of inventing all manner of ways to heal the sick, but we also have more ways of killing each other off than are necessary by any stretch of the imagination. So how do we know that these guys--who are now running atoms around a racetrack in order to make them collide at impossible speeds--know what they're doing?

Well, we don't. But I, for one, trust them. I don't equate this with faith, because faith doesn't require evidence, just belief. I don't believe that the LHC physicists and engineers know what they're doing; I simply trust them on the basis of their academic and professional credentials. Not only that, there are about 80 countries involved in the development of these projects--indicating that we're perfectly capable of working together to answer important, fundamental questions. 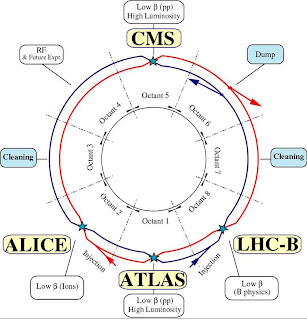 Perhaps I'm willing to cut them some slack (I am, after all, known for my critical stance regarding most technologies) because what they're doing is just so bloody cool. As a life-long science fiction buff, I've always been disappointed that we've done so little about getting out and exploring the universe. But now we're doing that--right here on Planet Earth.

If what's going on is unclear, I highly recommend the short video available on the CERN website, which focuses on the ALICE experiment now being undertaken. A longer film featuring physicist Brian Cox (with only one accent to deal with) is available from TED. Also recommended: an article from Seed magazine on "Why a Large Hadron Collider?" The irrepressible Stephen Hawking also talks about the project on BBC--and I have little trouble feeling comfortable with his assessments, since he's probably the smartest guy on the planet.

A couple of good blogs to look at for debunking predictions of catastrophe and dispelling fears of the apocalypse: New Scientist's Short Sharp Blog entry, and this one from The Biologista.

For the naysayers who are still afraid of doomsday, you can check in at this website for reassurance: http://www.hasthelhcdestroyedtheearth.com/

This morning, once again, I woke up in the known universe; so things seem to be going well so far.

September 27 update: Well, things haven't gone as well as expected. CERN announced on September 18 that the LHC would be offline for the rest of the year, due to electrical problems. For the full story see this article in Wired online.

Photo: The CMS silicon tracking detector, which measures the three-dimensional positions of charged particles as they travel through it, allowing measurement of their momentum; a diagram of the major experiments. Both courtesy CERN.
Posted by Owlfarmer at 7:15 AM 7 comments: