Skywatch Friday: An Afternoon in the Sun 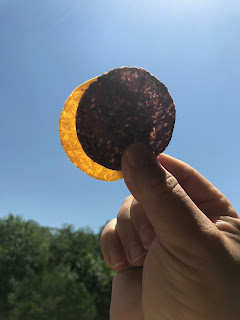 Several months ago I realized that we were nearing what would come to be called (in our ever more hyperbolic media outlets) The Great American Eclipse, but didn't get terribly excited because we wouldn't be experiencing much of it here in Texas. I thought about driving north to Kansas to catch totality, but wasn't thinking far enough ahead to actually make plans. By the time the event was upon us, I had actually missed the window for obtaining glasses, and was facing the probability of a pinhole projection experience.

Fortunately for us, an old friend, boss, and fellow astronomy buff invited us to his place to watch through his appropriately filtered telescope, and he had glasses. So, I whipped up some thematically appropriate snacks (chile con queso and black bean dip), found round yellow and blue corn chips, and located well-named wine (Moon X and Honey Moon) and beer (Luna y Sol), and we headed a bit south to an amazing refuge from suburban life, bordered by a forest and a meadow. I was so mesmerized by the green space that it almost distracted me from the business at hand. But not quite. 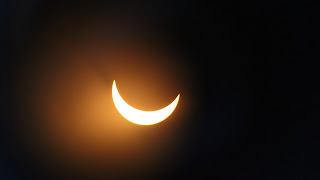 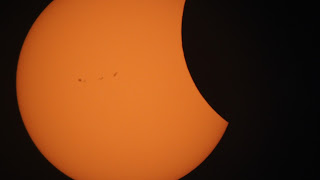 In all, we had a splendid day, enjoying the company of my friend (whom I hadn't seen for a couple of years) and his wife, catching up with news, and enjoying the terrific view from their back porch. I even swapped photos with my kids, one of whom was rather closer to the action, in Seattle, and sent me wonderful shadow pictures.

In another seven years Dallas will be in the path of totality when the next total eclipse passes over a small portion of the southern US (in 2024), so we're already planning another soiree. By then we'll have acquired filters for both our telescope and the camera, and will be much better prepared.

I have to admit that I was caught completely off guard by the enthusiasm that greeted Monday's event. A generally scientifically apathetic public was swept into a kind of frenzy, most likely because we were all so eager to find something uplifting to distract us from depressing political news. But the eclipse is over, and within a day the fever had abated--or was, rather, deflected to the latest lottery jackpot.

So I doubt that all that many of the people who were so engaged by Monday's hoopla will care a whit that September 5 marks the fortieth anniversary of Voyager 1's launch (the anniversary of Voyager 2's launch occurred the day before the eclipse). Some of us, however, are currently awaiting the arrival of our copies of The Golden Record, at which time we'll be able to geek out on the contents of the box it comes in, with all the rewards for having backed the Kickstarter campaign. Folks who missed the initial campaign can buy a copy from Ozma Records when it becomes available to the general public.

So, happy Skywatch Friday. I had a bit of fun getting the Beloved Spouse to reproduce approximate 75% totality with corn chips, but the photo was taken of the sky, so it counts.
Posted by Owlfarmer at 10:18 AM 8 comments: