Nature Red in Tooth and Claw 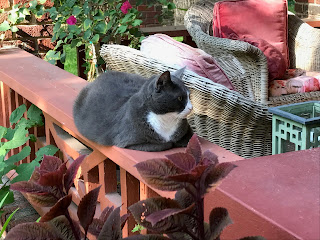 This post title comes from Tennyson's long elegaic poem In Memoriam, written over a period of seventeen years in honor of his friend "A H. H." (Arthur Henry Hallam). I've used the line often to describe the general Darwinian state of life in the wild, and to acknowledge the way things work in the world. As when the cat catches a mouse or a bird, or a hawk makes lunch of a squirrel.

But on Saturday, the 18th of this month, it hit much closer to home than usual, and somewhat ironically, when our well-loved cat Emma was killed by what appears to have been one of the local barred owls.  She squirted out the back door, as she often does, early in the morning when I let Arlo out for his constitutional. And then she coyly penned herself under the patio table so that I couldn't easily get her to take her in. So, when Arlo and I went indoors, I left the screen door ajar so that she could get back in when she got hungry. But she never made it.

A bit later, when everyone was up, we went looking for her. Too late. Instead of feeding her breakfast, we had to bury her, and never have I felt more guilty or been so overwhelmed with sadness about how nature works. I have not, however, felt bitterness toward the owl, precisely because I've spent so many years of my life appreciating the natural world.

I posted a warning on the local neighborhood forum, advising small-pet owners to be vigilant about keeping watch on their "fur people" as many neighbors like to call them. Collin County, where we live in North Texas, is rapidly paving over what used to pass for paradise in this part of the world, costing habitat loss and territorial disturbances for bobcats, coyotes, opossums, raptors, and other native denizens of the prairie. Our town's official motto is "Unique By Nature," which causes many of us to snort ruefully whenever a city official uses it to promote the area. Noise, concrete, and strip malls are replacing the quiet town and open spaces that drew many of us here, and we're all suffering the effects.

In the end, the remaining wild animals have to find sustenance where they may, and sometimes those meals show up conveniently in what otherwise seem like safe havens for the domesticated animals we humans keep as companions. We've often seen the owls swooping from our trees and the top of the house after prey (and heard them courting noisily outside our windows during spring nights); but Emma was not a small cat, and she usually perched on a table under an umbrella, or under the table itself during evening and pre-dawn outings. Although I always kept an eye on her whereabouts when she was out, I became a bit too complacent about potential danger at exactly the wrong time.

Emma came to us later in her life than our previous cats had done.  We were in dire need of a mouser, and her former person was marrying someone who couldn't live with an indoor cat due to allergies, so we took her in. She took a while to adjust to two noisy dogs and living with different people. She was about eleven years old when we got her (about the same as the dogs, actually), and settling in took some time. But she managed to tame the boys enough to allow them all to occupy the same space, and when Woody died, Emma and Arlo settled into a quiet companionship. 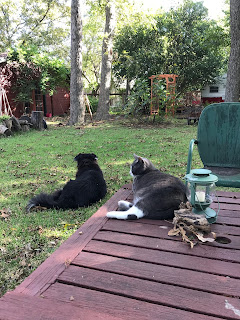 As our house became her house, and as she gradually earned the freedom of the back yard, she became the companion cat of my old age. We spent hours in the garden together after I retired, with and without the dog, and in the evenings all four of us would enjoy one another's company as the Beloved Spouse and I relaxed with a glass of wine or beer after long days at the lectern. By the time her male human retired, Emma had become a continuing source of amusement and pleasure. 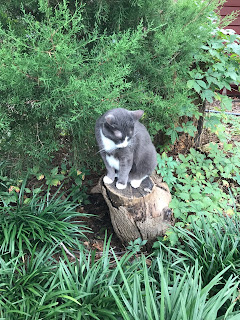 We will miss her enormously, and am thus grateful that her antics encouraged me to collect hours of video footage, so that I can relive such classic moments as "Emma and the Fireflies" (at least two episodes), and "Emma and the Great Mouse Hunt," and "Emma and the Flying Mouse." I took video of her rolling on one of the back patios a couple of weeks ago, just because it was cute. She certainly seemed to enjoy her life, and both my daughter and Emma's former "mom" describe her situation here as "cat utopia." 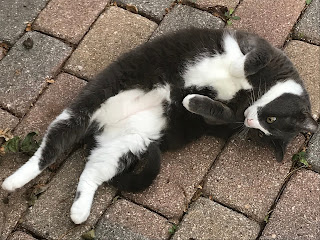 As stricken as I've been by her death, I also quickly realized that at my age I can't really spend as much time mourning as some folks might consider seemly. I decided to adopt sooner rather than later, and the story of that experience will follow soon. The effort is still in process, and I'm hoping for a completely happy ending before I describe it for all two or three of you who still read this blog.

In the meantime, I'm going to spend some time reading what Ursula K. Le Guin wrote about both ageing and her cat Pard (who is a black and white Tuxedo; Emma was the first grey one I'd seen except for the one on Carl Lawson's Daydreams poster, which hangs in the stairwell outside our bedroom) in No Time To Spare. I miss both her and Emma, and my world is poorer for their loss.

Image notes: Until this summer, Emma's favorite morning perch was the railing on the front porch. I used this photo on the neighborhood forum when she spent most of a day away from home--one of only two occasions she ever left the yard. The second photo, of Arlo and Emma last autumn in the back yard, illustrates a pretty typical moment between the two of them. The metal lawn chairs, which came from my grandmother's back yard, have since been repainted. Emma also liked to perch near where mice were known to come and go, and she's probably eyeing one here. The final shot shows her in a typical expository pose.

Posted by Owlfarmer at 2:05 PM No comments: