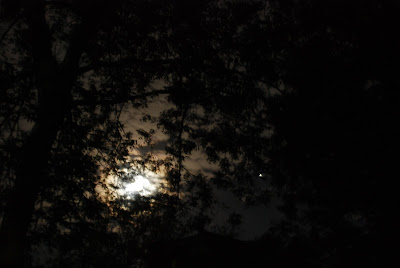 The various heavenly activities occurring over the last few days have made the night sky pretty interesting. Even so, I've only managed cheap shots with no tripod (I'm now thinking of setting it up and keeping it ready) that do a lousy job of capturing the conjunction of Jupiter and the Harvest Moon. Nonetheless, I had to try, and of the dozen or so shots I took, these are the best--this one from last night just as the moon was rising above the house and Jupiter peeked through the leaves (the same leaves I'll be raking in another week if the weather folk are correct).

I got it in the back yard--after standing in the middle of the street in front, risking my very life to try and get a cleaner view, to no avail.

This morning I looked out the upstairs window at about 6 am to see if the moon were still up, and since it was still well above the trees I took my time--made the bed, opened the shades--before going downstairs, grabbing the camera, and heading back out. By then, however, the clouds had started interfering, and this is what I got. Fuzzy and weird, but kind of interesting. It's pretty hard to tell that it's the moon, but again, no tripod. 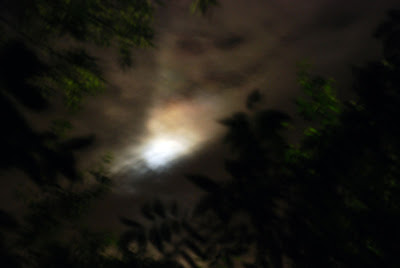 And finally, a word about the House Clock. I actually remembered to shoot the last appearance of the rising sun in my dining room window on Wednesday morning, on the last day of summer. Some of you may remember that it first appears in that window on the first day of spring. I love this odd seasonal reminder, and it only took me about two years of living in the house to notice it. The almost indiscernible object in the lower half of the photo is my telescope, which languishes in that corner for most of the year.

Like my distant Celtic ancestors, I've always been conscious of phenological signs and celestial markers that point me through the year. So living in a house aimed in the right direction (facing east) and blessed with a serendipitous architectural feature suits me just fine.

I'm hoping to put the telescope to better use now that I've got a nifty app for the iPad, Star Walk, that tells me what's going on overhead. It really works, and its super cool. I need a more powerful (and digital) telescope to do any serious capturing of heavenly bodies, but that's something to look forward to.

Skywatch Friday: The Photo That Saved My Life 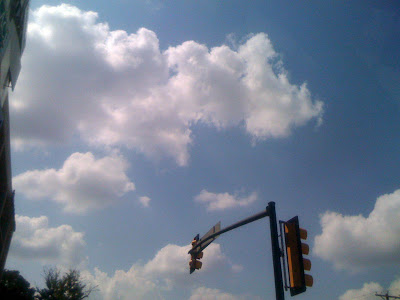 No kidding. On Monday afternoon I was leaving school, and stopped at the traffic light just outside our parking garage. I saw the cloud and, since the light had turned to red just as I got to it, and it's usually pretty long, I whipped out ye olde (antique) iPhone and quickly snapped the picture--thinking that it'd be good wallpaper for the phone.

I turned it off and set it down, looking up to notice that the light was now green--but because of the fraction of a second of extra time it took me to get rid of the "camera," my left turn into traffic was delayed.

Good thing, because just as I was about to pull out, some jackass came shooting through the red light at about 50 mph. If I had actually gotten going "on time," I wouldn't be posting here today, and despite Vera's nifty side air bags and terrific frame, I'd undoubtedly have ended up as a smear on the road, given the speed at which I'd have been hit.

So, thank you everyone, for being such inspiring skywatchers that I can't pass up a good cloud, in hopes that I'd end up with something worth posting. In terms of composition, etc., this ain't much. But it did save my life.

Happy weekend!
Posted by Owlfarmer at 11:30 AM 5 comments: 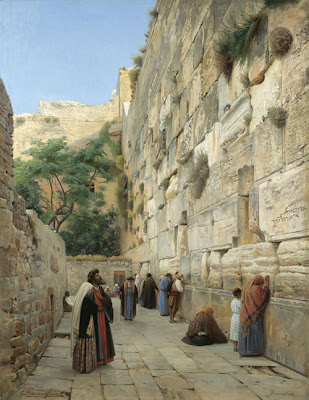 Although my super-religious days are long behind me, and I'm pretty much settled into the skeptical life for what's left of mine, I do understand the need for marking important moments in the year--and the Jewish High Holy Days stay with me because of this. I always find myself in a reflective mood, and remember the rituals (although I don't really practice them anymore) with fondness.

As I was cleaning house this morning, I mused on the fact that most of the recognition we pay to time is grounded in religious practice. During the last few weeks I've been lecturing about the building of cathedrals, illuminated books of hours, the liturgical year, and various religious observances, all of which acknowledge time in some way. Most festivals enjoyed by the faithful were originally tied to the agricultural year (planting in the spring, growing in the summer, harvesting first fruits in the fall), when one thanked one's god for his/her bounty.

In grad school I wrote a paper on ancient Greek agricultural festivals, many of which were suffused with mysterious rites of fertility, and dramatic performances that ended in catastrophe and catharsis. Emotionally purged, spectators went home chastened and renewed. I always thought that this sort of thing would be good for us moderns, but we seem to be too busy. A quick weep in a sad movie is about all we can muster.

Nowadays, most of our holidays are spend-fests, milked to the last nickel by our communal need to express ourselves by buying stuff. Even the most deeply moving feasts of the year seem to be less about the season or the event being commemorated than about buying Easter candy and outfits or Christmas largess. The common complaint about the earlier and earlier arrival of "the Christmas shopping season" reflects the fact that even our most sacred holidays have been co-opted. Although people complain incessantly, however, they still participate.

Because it's been quite a long time since I escaped that particular aspect of American modernity, I've had the luxury of seasonal reflections on life, the universe, and the garden, and these have taken the place of official celebrations as my children have grown and moved away into their own lives. Lately I've been hankering after real family gatherings--at least one or two a year that involve actual meetings and food and being together, and it looks like this year I might get my wish, at least once, at Thanksgiving.

This is actually a terrific holiday in theory. It's essentially secular, having no real religious connection except with a rather mythical image of Pilgrims. But it's seasonally appropriate, celebrating as it does the end of the harvest, and the enjoyment of plenty before dearth. If one can look past the cheesy holiday decorations and pre-Christmas "sales events," the couple of extra days off and the promise of a good meal and good company can really lift the spirits before the winter cold sets in and the heating bills start to go up.

My son and his wife, as it turns out, have decided to join my daughter and her new beau and me and the Beloved Spouse this year for the long weekend. I'm not quite sure when it happened, but the actual meal has become my daughter's province, and will be held in her loft in a funky-hip area south of downtown Dallas. I bring Grandma's dinner rolls and good wine, and she does the rest. She's turned out to be a damned good cook, and I'm happy to turn the real work over to her. I imagine that we'll do something in our digs as well, especially if the weather's fine, as it often is at that time of year. The end of summer is now thick with promise.

Even though I don't really celebrate Rosh Hashana these days, I mark it, if only by reflecting on ways to make the next year better. One of my promises to myself is to write more, especially on the Farm, and to improve the garden. The possibility of the former has been enhanced by the likelihood of an accommodating teaching schedule, and a quarter off from administrative duties. I'll be teaching one course I haven't taught for three years, and another for a year, so the variety alone should perk me up. I'll have a fair amount of mental reconnoitering to do at the weekend, since Yom Kippur begins Friday night and it does tend to sober me up--in more ways than one. By then my college's accreditation visit will be over, and the quarter nearly done, so endings and beginnings will commingle rather poetically.

And now, if you'll excuse me, I'll go make a start on the garden. After last week's visit from Hermine, it needs my help in tidying up.

Image credit: I was looking around on Wikimedia Commons for an appropriate seasonal picture, but wanted to avoid the usual pumpkins-and-autumn-leaves fare, lovely as some of the offerings were. Thinking about Yom Kippur led me to the Wailing Wall, and this lovely painting by Gustav Bauernfeind (1848-1904). It also seemed appropriate given the day on which this post was written.