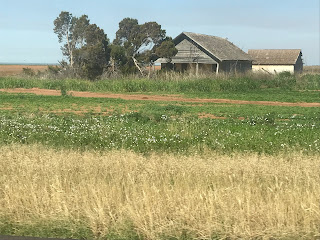 Last Boxing Day, on our way out to our annual family gathering in Tyler, I began to notice the frequency with which we passed abandoned, tumbledown farmhouses. But I didn't take any photos, and the whole phenomenon slipped my mind until our late spring road trip west, when I started noticing them again as we drove through west Texas. Still, I didn't get around to taking pictures until we were back in Texas on the last day of the trip, heading east to McKinney.

After we got home, I thought about starting a collection of these photogenic but rather sad structures, in which people no doubt lived out their lives and which inspired a bit of rumination on my part--about what life might have been like for those who lived there, and why they had left. Still, I didn't even get around to looking at what I had until inspired by current events, impending dystopia, technology, and my preoccupation with the troubling nature of progress.

What finally got me going was reading Mark Boyle's new book, The Way Home: Tales from a life without technology (the title of which I've shamelessly cribbed for this post). The book was mentioned by Tom Hodgkinson in one of his recent Idler newsletters, and since I'm always up for learning how people get by without all the mod cons, I ordered it to help with the revision of More News From Nowhere. I've been reading it before bed lately for its sheer peacefulness, and as an antidote to the television news. It's got me thinking again, as I often do, about how much of what we have these days is necessary, or even desirable.

This often happens during high summer in north Texas when the humidity and temperatures are both in the high nineties--conditions I encountered for longer spells when I was a child in Taiwan, long before the days of domestic air conditioning (or even television, for that matter). I'm often amused by the expressions on people's faces when they learn that we do not have central air con in this house, and some rooms (including the kitchen) have none at all. So it's not all that difficult for me to imagine what life would be like without some tech that Americans now find indispensable. But the heat is so hard on our animals that we can't even consider boondocking in Porco until after the summer heat has passed. And even when we do take them camping without hookups, we'll still have solar panels for electricity and propane for cooking, so we won't exactly be roughing it.

What all this has to do with the old ramshackle houses in west Texas is essentially the toll that techno-progress has taken on older, less complex ways of life--the kind that my grandparents experienced, and that folks in many other countries still do. Even in my lifetime it's been possible to live through a summer in Texas without HVAC--but that was in the fifties, before there were a gazillion reservoirs contributing to the humidity. Even in the late sixties it was possible to drive across Texas with a swamp cooler attached to a car window to cool things off. But a swamp cooler won't do anybody any good any more, except in the desert regions of far west Texas. And I'm still wondering what happens to all that hot air that come out the back end of the window air conditioners in our house.

For whatever reasons--probably mostly economic--folks have left these old farm houses, and they're slowly following the rules of entropy. Could be that they finally made enough money to build a bigger, fancier, air-conditioned house way back on the property, away from the road and the increasing traffic noise, but it's more probable that kids grew up and moved away, Pa died, and Ma moved in with her daughter's family. Or the bank took back the land because the crops failed. Or some other variation on a perennial theme.

I wonder if many other people even notice these houses. But what's especially puzzling to me is why the houses are still there. Why they haven't been torn down. And why there are so very many of them! When I had my phone ready to snap the shots, I seldom had to wait more than five minutes driving along US 287 before another appeared. 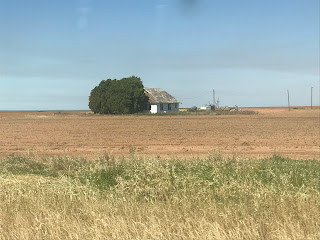 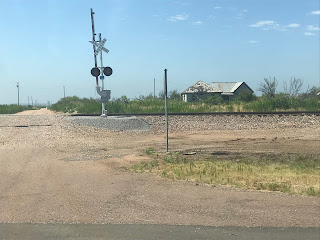 My fascination with abandoned places was established long ago, when I would peep into the windows of empty workers' cottages around the Cottonwood power plant where my grandfather worked, or explore the tiny empty house above the last place we lived in on Yang Ming Shan in Taiwan. Like ghost towns and derelict mining works and archaeological sites, they're all evidence of lost worlds. At best they spark the imagination as we try to conjure stories of what it might have been like to live or work in these spaces. At worst, though, they can provide a glimpse of things to come if we don't start choosing better, less destructive, and less philosophically compromising ways to live out our own lives.

Image notes: all three of these were taken out the window of our Jeep with my iPhone. One thing we can count on in the summer in Texas the dominance of clear blue skies, giving me another sneaky opportunity to link the post to Skywatch Friday--where lovely shots from skies around the world can be found.