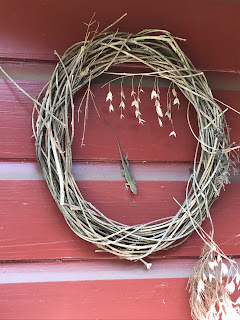 This blog will celebrate its tenth anniversary on June 22, and from year two on, the one consistent activity has been an annual Earth Day message. This year's opening illustration is of one of our resident green anoles, posing nattily within a wisteria wreath.

I'm of two minds about this year's post, because on the one hand the State of the Earth (or at least of the Nation, which is inordinately responsible for the planet's health) is about as dismal as it's been in some time; on the other hand, however, my garden is (because of the changing climate and its consequent early spring) presently lusher and much more promising than usual.

Oddly enough, according to an article yesterday in the Daily Poop, "Earth day Texas drew a record attendance of more than 130,000 last year and boasts of being the world's largest Earth Day Celebration." Texas. Really. The Texas part will be dropped next year, however, to become EARTHx and more global. Pardon me while I put on my skeptic's hat and spend the day in my verdant back yard. 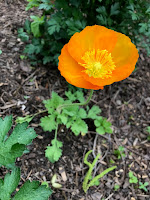 At the moment, the wild gladiolus volunteers, which have proliferated far beyond expectations, are already past full bloom, the air is redolent of honeysuckle, catalpa, and the last of the Chinaberry blossoms--along with the musty scent of privet flowers. I have my first poppy ever (I purchased two plants this year and tucked them into the pepper/parsley raised bed. Bergamot and salvia are blooming in the potager, and the garlic chives I tried to hack off a few weeks ago are resurrecting themselves. The veg in "Woody"s Garden" (aka Stump Henge) are coming along; tomatoes are blooming--though whether or not they set fruit before the heat hits is yet to be seen. We're holding a convivium for a philosophy conference here in a week, and my job between now and then will be to tidy it all up and make it look at least slightly civilized. Not that I really want to. Although I do enjoy how orderly everything looks after I mow, I appreciate even more the shaggy growth of a few days later, when the clover is back in bloom after having been lopped off by a low setting on our environmentally correct electric mower. I do let things go in the North Meadow, the small strip of self-sown "weeds" (mallows mostly) and the perennial ajuga that came with the house, along with another variety I planted a few years ago. Ajuga likes the shade, and sends up pretty purpley spikes that make glancing out the dining room window a pleasure. 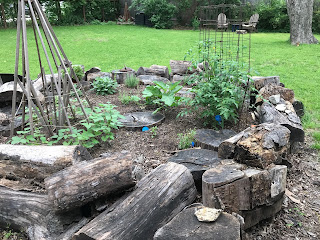 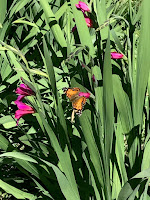 Of late I've been recording life both tame and wild in the garden. The cat frequently poses for amusing shots, but I've also been filming lizards (geckos and green anoles) and squirrels and butterflies and fireflies. I have some notion of putting together a "Slow Backyard Video" page on YouTube to house them. It will undoubtedly be private, though, and available to a select few who will promise not to say nasty things about why I would even bother to "film" ten minutes of a lizard climbing along a tomato frame. Or fifteen minutes of my cat at dusk, watching fireflies. A couple of days ago I was so intent on recording a squirrel's antics that without noticing, I stepped in an ant pile and was subsequently bitten so aggressively that my profane comments are clearly heard on the video. But when I'm not busy swearing, I often manage to catch a butterfly enjoying one of the gladioli, or bees buzzing around the blossoms that have been planted on their behalf. The idea is that they will all find the blooms and pesticide-free ambience attractive enough that they'll hang around and help pollinate the tomatoes and peppers and squash.

It occurs to me that in times of strife and stress such as ours, finding sanctuary in one's home and garden is for some of us about the only way to practice a life worth living. I'm just too old and too tired to march in the streets, and too busy home-keeping to join the festivities at Fair Park--as glad as I am that Dallas is at least paying lip service to sustainability--especially when they can attract loads of visitors and cash in on potential revenue.

So, to those who've visited this blog over the years, I hope you'll enjoy the day/week that's become much more widely celebrated than I'd ever have imagined back in 1970 when I did join the crowds in Philadelphia for my very first Earth Day. Tiny houses, electric cars, greener energy sources, backyard chickens, and myriad other signs that the apocalypse may not actually be upon us (at least not yet) give me some small hope that next year's post will be a little more sanguine.
Posted by Owlfarmer at 10:06 AM No comments: