In A Bleaker Midwinter 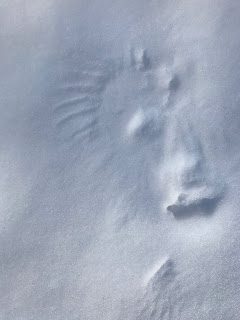 For the better part of three months now I've been pondering various topics for posts. But every idea was soon overcome by new concerns, or interrupted by politics, or otherwise confused by events that changed my perspective or that made whatever notion I was pursuing seem trivial.

This last week has been so eventful, however, that much of what I have been thinking about has coalesced into a meditation on the fragility of normality and the perils of modernity. So this may ramble a bit more (even) than usual, but it has to start somewhere.

Two Thursdays ago we thought we were being terribly foresightful by hitting Costco to load up on wine and dog treats and a few staples in advance of predicted nasty weather. Snow was promised, and we usually don't mind that, but since Texans are notoriously bad at driving in snow and ice, we wanted to avoid them by hunkering down and waiting it out. We bought an extra case of San Pellegrino, stocked up on stew-fixings, and snagged a bag of Lindor truffles.

Then we snuggled in, watched the weather reports--which became more and more dire as the weekend approached--all the while thinking that (as usual) this was all overblown and at best we'd "suffer" an inch or two and then Spring would come blowing in from the south.

Well, anyone who's been paying any attention at all to national news now knows that we were flat out wrong. At this point I have to wander off a little, to let you know why it was that we didn't just end up heading south to Dallas to stay with my daughter. We had told her that we were good; after all we had a Bluetti portable power station to keep our devices charged, and should be able to handle the sort of brief power outages we'd experienced in the past. We also have two gas wall heaters in our bathrooms, remnants of the days when this hundred year-old house was heated by space heaters. We also have a dual fuel range in the kitchen, and could therefore manually light the stove for cooking purposes.

Ever since we bought our retro travel trailer, Porco Rosso, we've been collecting kit to help us boondock on public lands, which is why we have the solar-chargeable Bluetti. We also have a couple of large coolers, but their eventual uses were unexpected.

By Sunday night it was looking like maybe the forecast was more accurate than we had thought. I took a couple of snapshots of the early accumulation, and woke up Monday morning to a lovely blanket of snow, and watched it accumulate further over the next few hours.  And then the lights went out.

The next couple of days were something of a blur, because after we lost power, our pipes froze. The power came on again briefly once, and then stayed off for quite a few hours before it came back on for less than an hour and we lost it yet again. By then the news was talking about "rolling blackouts" that would last for a few minutes to an hour before the power resumed. But that only happened across the street, behind us on the next street, and north of us.

Full power didn't return until Thursday, but when the water in our pipes thawed, we discovered that there was a noisy leak under the kitchen, so had the city come and turn off the water.

Pioneer smarts allowed us to figure out how to use all that snow (over five inches by the time it ended) to our advantage, by filling up canning vats, soup pots, and the coolers (finally getting some use) with water and melting it for flushing loos and washing dishes. After the second storm ended, The Beloved Spouse went out for a few gallons of drinking water for making coffee (we had plenty of San Pellegrino to drink) and filling pet bowls.

In the end, we managed to stay warm enough using the Bluetti to power a little fan that blew the warm air from the bathroom into the bedroom, loading up with eiderdowns, and using upstairs as Command Central until the power came on (usually for no more than an hour or two, at totally unpredictable intervals). We used the living room fireplace a couple of times, but its inefficiency made it useless except for ambience and as a way of providing the pets with some semblance of their regular routine. On the first day with almost no power at all--but sunny--we charged the power station with the solar panels.

As things begin to warm up, the water in the rain barrels under downspouts (we have five, but only three are in use) began to thaw, providing us with a source of water after the snow started melting away. By Friday of Storm Week it was almost gone. Calls to our plumber gave us a Monday slot, but the initial check showed that we'd need a team, and that couldn't happen until Thursday. But today (Wednesday) the guys came early, crawled under the house, and replaced a section of copper pipe that had a 3 cm break in it. Now things are back to normal--although we've got two coolers and two vats full of water in the downstairs bathtub, so we'll keep flushing that toilet by hand until we use--rather than waste--all that water.

Meanwhile, the myth of Texas Exceptionalism has not only been shattered, but blown to bits and exposed to the world. Greed and the interests of the oil and gas industry have shown themselves to be the governing principles of Texas energy politics. Secessionists' utopian ideas of a regulation-free Texas-only grid have resulted in catastrophic dysfunction and a resulting dystopian experience that rivals post-apocalyptic YA novels. During the worst of it, the perfect metaphor for Texas politics arose, in Senator Ted Cruz's astonishingly inappropriate bug-out to Cancun.

In the end, we were extraordinarily fortunate. The little bit of prepping we had done for camping purposes turned out to serve us well. We got by with nothing worse than a hefty plumbing bill (but less than we had expected) and a damaged garden. Thanks to a Sunday afternoon jaunt down to Dallas to visit my daughter and her partner (who--probably due to their proximity to a local fire station--lost neither power nor water), we enjoyed a lovely lunch, took showers, and washed a load of laundry before heading back up to a cold, dry house.

As I type, millions of Texans are still without power or water. If there were ever reason to reexamine not only the impracticality of the Texas grid, but the absurdity of huge public power grids in the first place, this is it. The ludicrous (and probably immoral) ambition of Texas to draw more and more people into the state without providing the infrastructure to support the growing population may now be reconsidered, but it will take a monumental political shift to accomplish any meaningful conversation about the future.

If that weren't enough, the specter of the Plague continues to loom over all of this.

One final note: as TBS and the plumbers (all masked) congregated at the curb to turn our water back on, a woman and her teen-aged son (unmasked) walked by, and she gave my husband a dirty look. While walking away she said, "That's pretty frightening to a woman who has been assaulted before."

This is the Texas I live in.

Image note: I'm having trouble with airdrop from my iPad, so included this shot taken on my iPhone 7 of what seems to be a bird-version of a "snow angel."