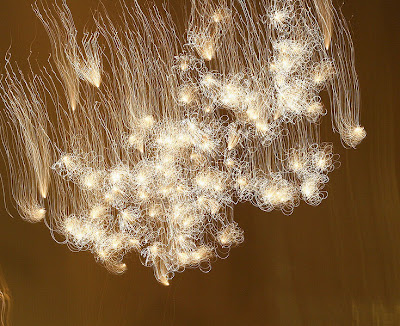 Having just lived through the Quarter from Hell, I've been absent from the Farm for some time. So one of my resolutions (many of which I actually keep) is to post on at least one blog a week in the new year, just to keep my brain from tangling up.

And things do look a bit more promising, especially in regard to my classes. The nightmare of teaching four different overlapping preps to a surlier-than-usual crowd of students, few of them particularly anxious to learn anything I had to teach, is over. I'll only have one new class, and it will be small; the others have been consolidated into two (although there are two sections of each level--Art History 1 and 2--with between 30 and 39 students in each) and I've spent my winter break trying to get lesson plans in shape. I somehow managed to take notes on what worked and what didn't during the Fall term, and have had a chance to address troublesome issues. So, if I can manage to seduce three or four in each section into learning instead of whining, I'll count the upcoming Winter a success.

If I sound like I'm whining myself, I probably am. But I've been gobsmacked by a surprising number of students who simply don't care how they spend their money or whether they learn anything or not. They want simply to get through the course with a D, and if they don't--well, what's another two grand and another eleven weeks with the old bitch? Without the handful of eager learners who did emerge, I might well have been tempted to give it all up, take the minimal Social Security allotment, and chuck what's left of the career.

I'm fully aware that many of my colleagues are out of work altogether, through no choice or fault of their own; I'm also well aware that I should thus be grateful for mere employment. But teaching is one of those professions folks don't go into for the money; we're often passionate and committed and convinced that we've got a mission, and that this country needs good educators. But teaching these days is becoming something of an exercise in head-banging because politicians who know nothing about what's really involved with educating children are making decisions in state, local, and national legislatures that make it almost impossible for teachers to teach and students to learn. Top all that with a growing cultural bias against intellectualism that replaces curiosity with the instant gratification of digital technologies, and we've got a recipe for an abyssal decline in the national intelligence quotient.

Just when we need smart, capable people to help us get along in the world of the future, we're raising a crop of incurious, distracted, artificially connected young people who will grow up not understanding much about history, culture, science, or how to fix their devices.

Nonetheless, I begin each new quarter with hope. Perhaps this time I'll end up with a couple of classes filled with eager, hungry students grateful for the opportunity to learn. Then I can keep on trying to offer opportunities to discover new ideas without having to dumb down my material to meet lowered expectations or lack of enthusiasm. I can also usually bank on getting one or two older students, returning after a military stint or to update their credentials in order to find new work. I guess I'm fortunate that it still takes only a few of these to make the whole enterprise worthwhile.

I find myself thinking on a smaller, more local scale these days. Grand utopian visions seem a bit silly in this time of dearth and drought; but it's a new year. Anything can happen. I keep thinking of a character in the Nero Wolfe novel, Death of a Doxy. Julie Jacquette, a showgirl with an intellect of gold, gets 50 grand for helping Wolfe and Archie catch a killer. She uses it to go to college, and when she writes Archie with an update she ends her letter with "I wish you well."

It seems like an appropriate sentiment for New Year's Eve.

Image credit: uploaded to Wikimedia Commons by Magnus Manske. Apparently taken in Norway on New Year's Eve, 2006.
Posted by Owlfarmer at 10:17 AM 5 comments: