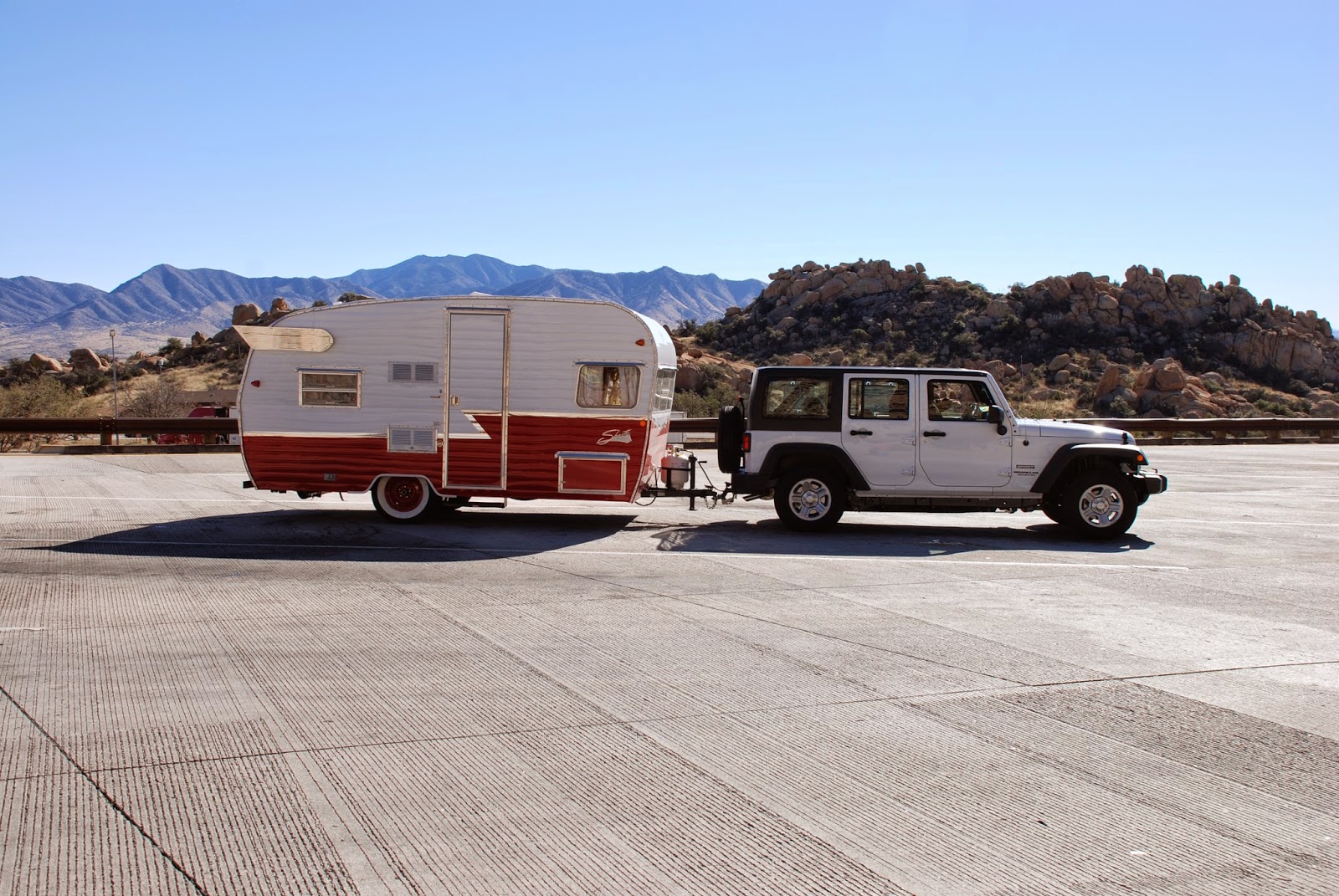 Sometimes it actually becomes possible to act on a desire—to fulfill a pipe dream or a deeply held wish.  So, after innumerable years of daydreaming about owning an old travel trailer (specifically, a ‘60s era Shasta Airflyte), the planets and stars finally reached a favorable conjunction and we got one.

Last year I filed for Social Security benefits, realizing that what I’d acquire in extra benefits by waiting until age 70 probably wouldn’t pay off in the end (given my genes and the current state of the world). The tidy little sum I now get every month on top of my salary (I’m still teaching full time) has meant that we’ve been able to pay off significant debt and begin to allow ourselves a few luxuries we’d never have dreamed of before now.  Our frugality had, in fact, begun to wear on us, and we decided that rather than wait for actual retirement we’d try to enjoy ourselves to a modest extent before then.

I should also mention that just last summer we’d had some work done on the house (about which I’ll write anon), which included a new hog wire and cedar fence with two twelve-foot gates on the west and south. This was viewed at the time as rather fanciful, since we had nothing to pull through those gates and no real hope of getting anything any time soon: just planning for the distant future, we thought.

Then, after I had paid off the loan on Vera, it was the Beloved Spouse’s turn to purchase his final car (we don’t either of us imagine ever buying another). Quite coincidentally, the Shasta company had celebrated its 75th anniversary last year by re-issuing the little 16 foot Airflyte in a somewhat modified version at a price comparable to what we would pay for an authentic vintage job. And this version has a toilet, which is a significant issue for folks our age.

Of course, we needed a car that could pull a trailer—even one as modest in size as the Shasta—so we conducted research on Toyota FJ Cruisers and small trucks, looking for the most fuel-efficient V6 we could find.  In the end there turned out to be no such vehicle—and everything appropriate got about the same: 20 mpg or less.  And since we didn’t want anything fancy (my dream was to find something with as few electronic components as possible), we started looking at another company that had been making vehicles since 1941: Jeep.  The Wrangler Sport we ended up with has 4-wheel drive, no GPS, roll-down windows, and locks that require keys be inserted into them. And, it can easily pull our little 2500 lb. trailer.

It also turns out to be a terrific dog car, which we found out by dragging the Guthrie boys to California and back over our winter break.

More on that will follow, because it involves a visit to the Valley and some time at old haunts. But the fact that I can write anything at all is due in no small part to the fact that we were able to get away for the first time in ten years, and that having fulfilled the probably silly dream of having that trailer parked in the back yard (just as my grandmother had done in my fondly-remembered childhood).  Every time I go back there, it makes me smile. 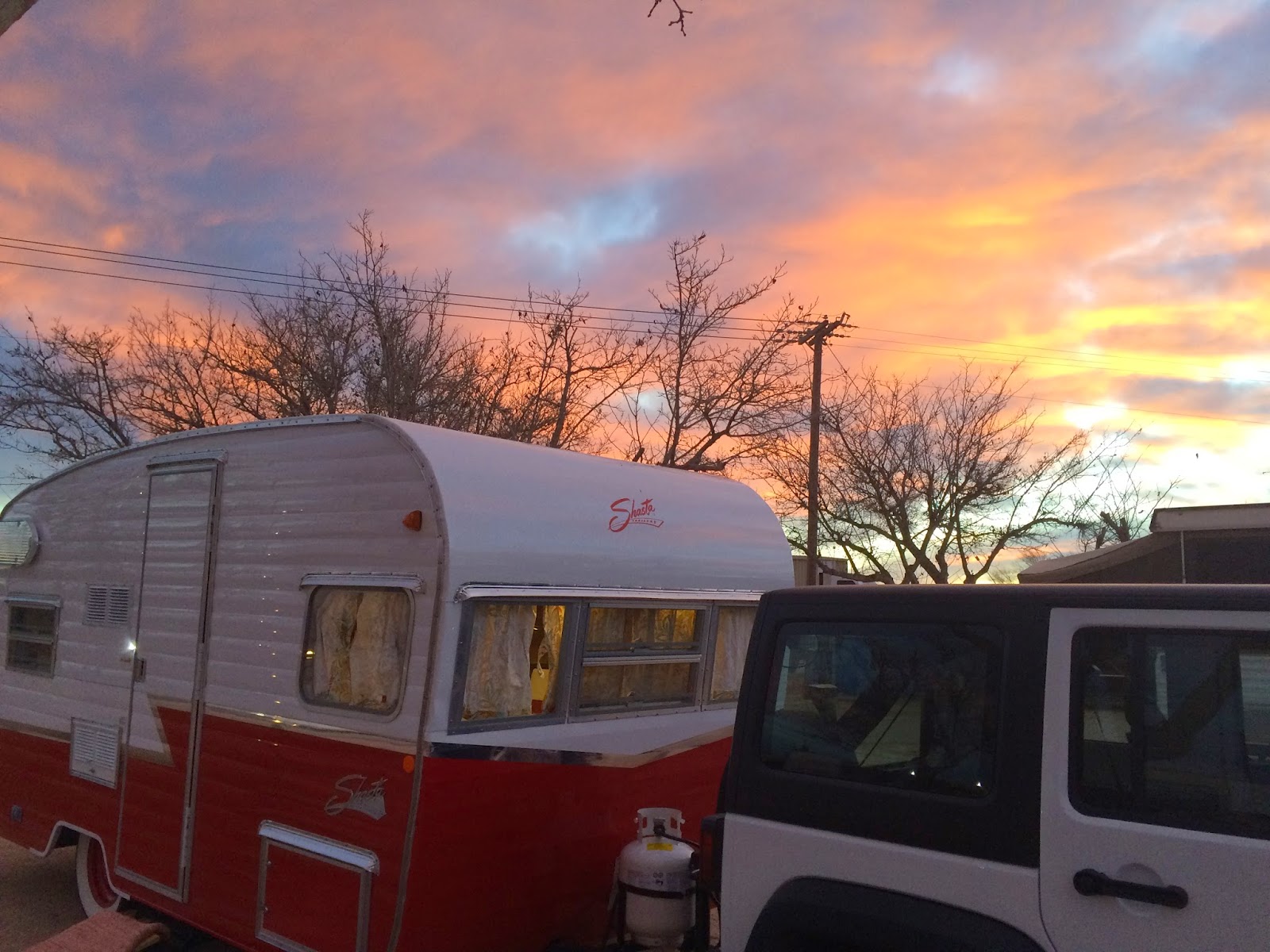 The last three photos are a bit cheesy (via Vintique on the iPhone), but they remind me of some taken inside Gram’s Shasta back in the day. 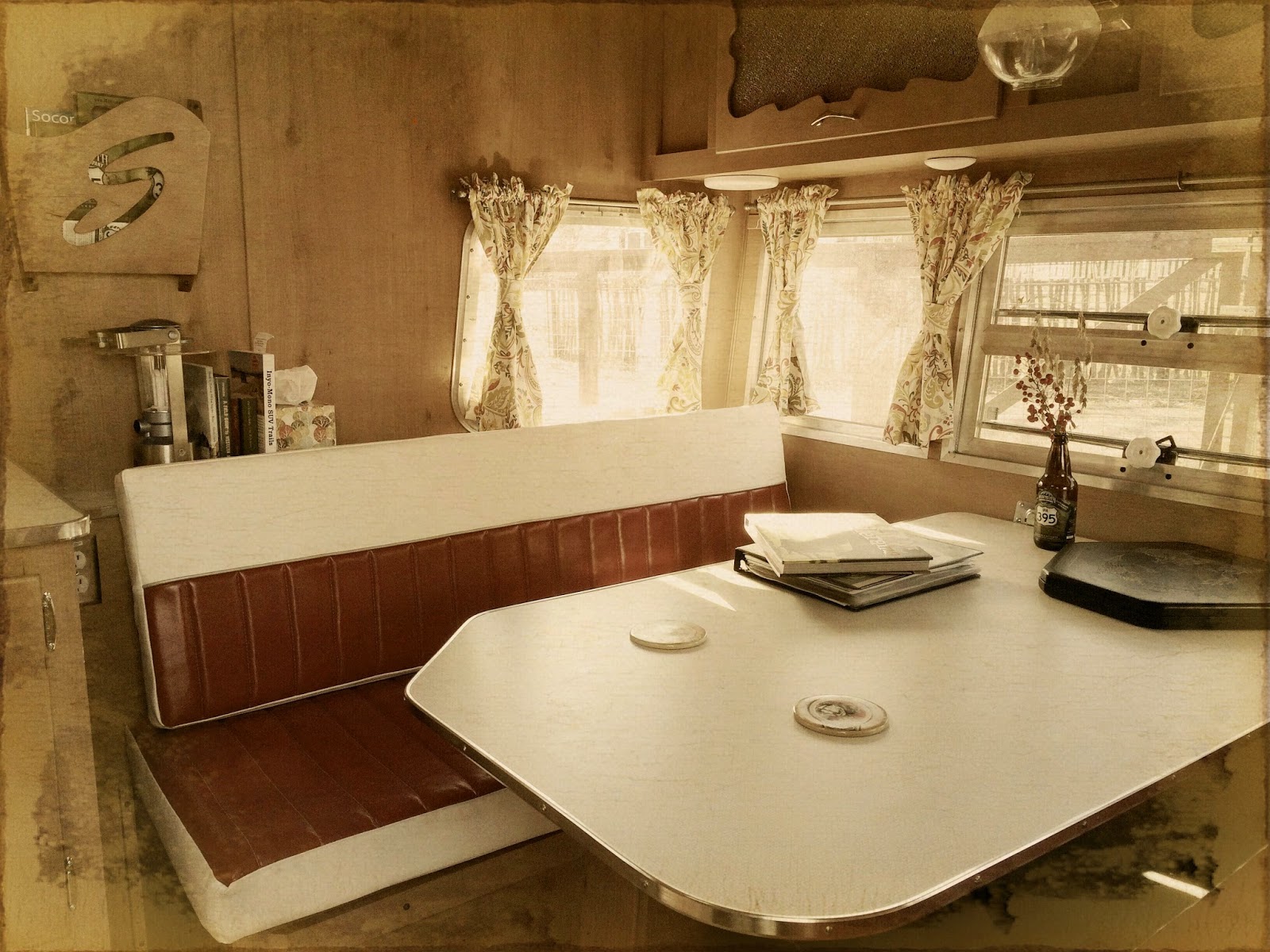 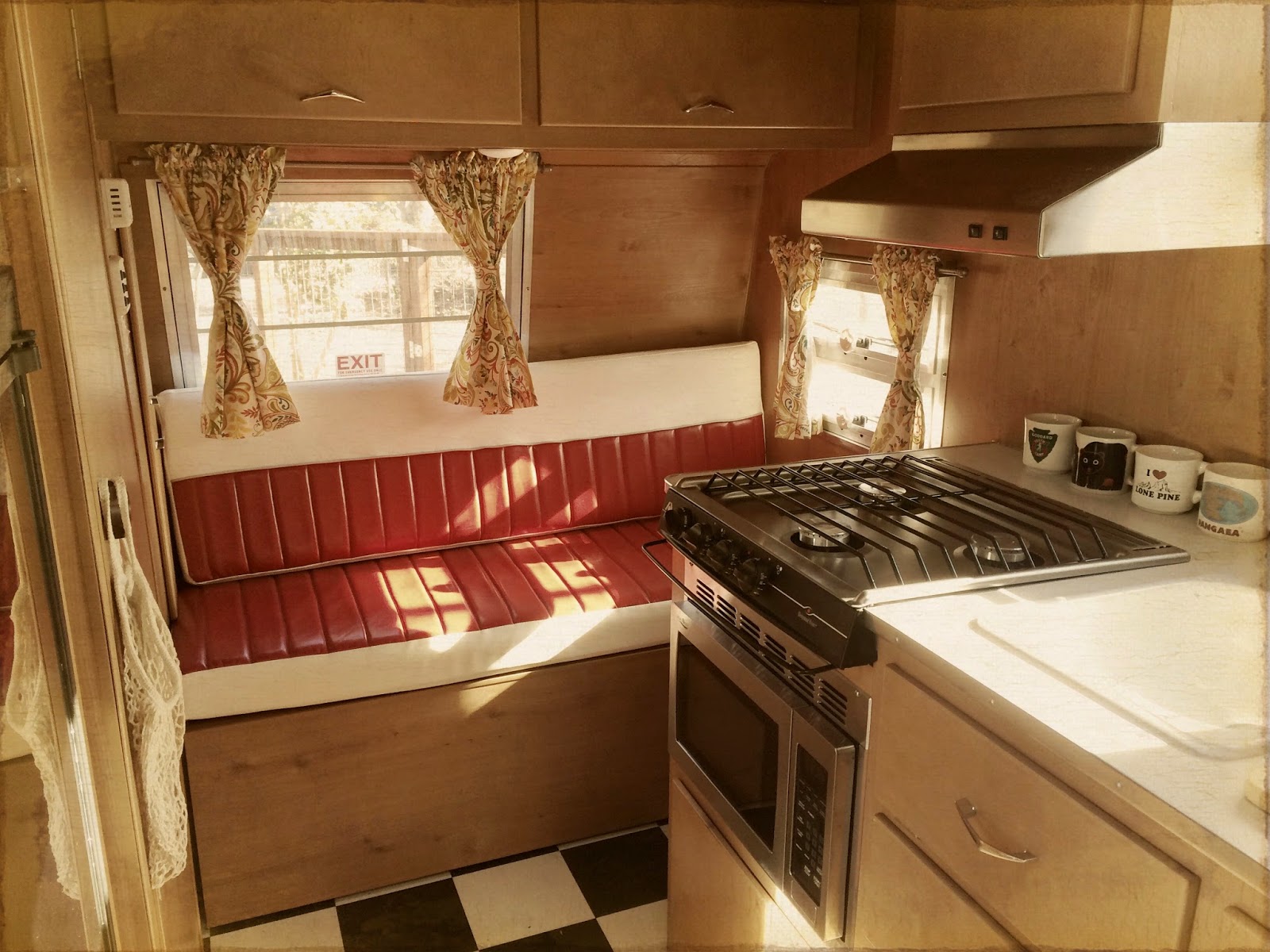 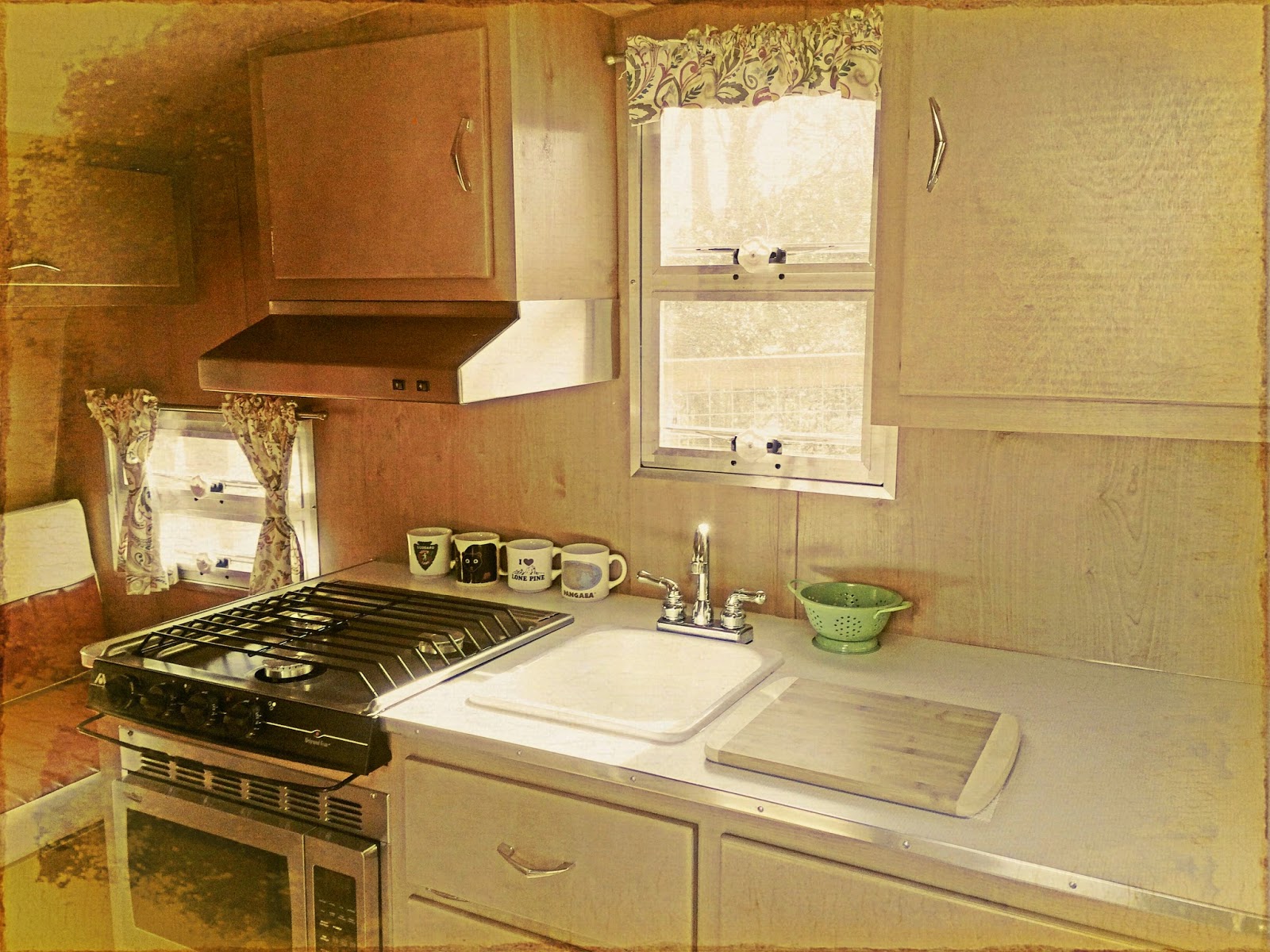 It's not quite Grandma's trailer (somewhat less substantial, and the back bench can't be used as a bed, even for dogs, because when it's pulled out it blocks the loo), but makes for a lovely little backyard retreat and a good place for sipping wine and watching sunsets.

Educating one's desire is an admirable pursuit, but it can lead to general angst and resentment, especially when one is surrounded by ridiculous extravagance on all sides. So while it's probably not inappropriate to question my philosophical purity, at least we didn't buy a behemoth truck to pull one of the colossal forty-foot toy-hauler monstrosities that were parked next to our little Shasta on the lot. And the important thing, I think, is that we wouldn't ever want to.

Posted by Owlfarmer at 1:51 PM No comments: