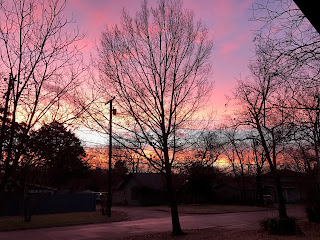 Although I'm not terribly happy about this photo (I generally avoid power lines and try to frame photographs without stray house bits, like the corner of the gable on the upper right), it and its companion below represent this post rather nicely, and were taken on the same day about a week ago. The "Sunrise" shot (above) was taken from the front porch with my new iPhone 7. 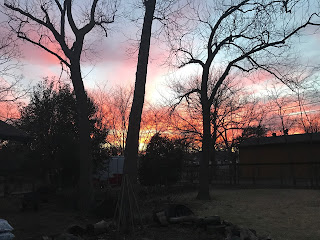 The "sunset" shot, taken in the back yard, also includes power lines, so there's an additional aspect of symmetry; I usually stand atop chairs and other furniture to try and avoid them. However, I wanted to submit something to Skywatch Friday for the first time in ages [as usual, thanks to the crew--and do go see what folks from all over have posted], so here we are; what you see is what I got, and I'm making do.

As I am with all manner of things these days. I will not be viewing any of the inaugural festivities tomorrow, and since the weather should be warmer, will instead be doing some early garden prep, reading some Wendell Berry and Joseph Wood Krutch, and watching a couple of episodes of Netflix's wonderful adaptation of Lemony Snicket's A Series of Unfortunate Events. I can't imagine anything more appropriate, given the state of the Union. Thus, the photos seem to hold out a little promise for a not completely bleak future, but I won't be holding my breath.

Despite my usual less-than-optimistic view of things, I've decided to find ways to muddle through the next four years. I'll be rethinking and redesigning my website (and changing the name from Owldroppings to Owl's Farm; this blog will be linked to it), clearing out the detritus in the garage and attic (in case we decide we just can't abide Texas any longer), and finding more ways to live more sustainable lives.

Inspiration for all this has come from several places, including my new subscription to Australia's Slow magazine, ecopoets like Krutch and Berry, and even the latest issue of American Craft. The editor, Monica Moses, has written a wonderful little essay on the role of craft in keeping one's sanity in uncertain times: "The Tough Make Art," in which she describes her own plan:


Like a lot of us, I’m looking for ways to cope with the discord, to feel hopeful again. I’m returning to the basics: eating well, exercising, trying to sleep, spending time with loved ones. But I’m also doubling down (as the pundits would say) on art. (American Craft, Feb/Mar 17, p. 10)

My own map of the next few months includes efforts to accomplish much the same sorts of things, including the art part. Her sentiments are in tune with much of what I read among the thoughtful writers whose works I frequent, now that I find myself sticking to the Arts & Life section and the funnies in the Daily Poop,  and the Books and Trilobites sections of the New York Times. Never have I felt more grateful for the library we've amassed, because it should prove most valuable over the next four years, reminding me that sanity might well prevail.

So, for what it's worth, here's what I have in mind:

Eat Real Food. I stole this designation from my Whole Foods Market newsletter, which offered its customers meal plans in several categories. But it's really what I've been trying to do for years, with the help of Michael Pollan and Mark Bittman and others. I've become rather more serious about it since my retirement awarded me with more time for contemplating and planning. We also recently invested in a smaller refrigerator, which facilitates consciousness of how much we buy and where we have to store it. It's also a terrific deterrent to food waste. The Beloved Spouse gave me Lidia Bastianich's new book, Mastering the Art of Italian Cuisine, and The Big Book of Kombucha for the holidays (plus Cooking With Loula, a lovely Greek cookbook I noticed while shopping for other people's gifts). I have always loved cookbooks that are more about history, philosophy, and culture than technique, and these are all inspirational additions to the "food" segment of our aforementioned library. Over the last two weeks I've spent more time planning meals and enjoying the process than I'd been able to do for several years.

Get Real Exercise. The realization that the new, pricey drug I'm taking is likely to prolong my life significantly (and my favorite cardiologist's reminding me that exercise won't do squat for my cholesterol but will do massive amounts of good for my brain and overall well being) has made me more conscious than ever of movement. What finally got me perambulating the neighborhood was the death of our sweet dog Woody last summer. His brother Arlo no longer had a reliable source of exercise, so I started walking him, dropping him off at the house when he got tired, and then continued on my own several times a week. TBS would join me on weekends and holidays, and we've gotten to know the topography of the neighborhood better than we had in the previous sixteen years. Over his winter break from teaching we kept up the dog walking, but neighborhood exploration slacked off due to weather and family obligations.  But a movement-tracking app on my phone has helped keep me from being completely sedentary, and as the weather warms up and I get into the garden more (as I plan to this afternoon), I should hit the "active" category much more frequently (now "lightly active" rescues me from couch potatohood). The goal is to use my body better, get stronger, and get out much more.

Make Stuff.  Some time ago I bought a lovely journal with a William Morris design on it (actually, a sketch for a wallpaper design) in which I've been writing down and sketching out ideas for art books and other little projects. I'll try to get some of these done--including the redesign of my web pages. But I've been wanting to go back to painting and "making" things,  which I haven't done since my children were small. This includes working on the house and garden--painting and plastering and staining and the like, along with general homekeeping, mending, knitting, and quilting. Using one's creative juices seems to be a particularly satisfying way to make it through trying times.

Write More. Having received my first rejection slip (for a story in a science fiction anthology), you'd think I'd have sworn off any desire to publish more than for myself  (and my one or two faithful readers). But I've decided to do what I used to urge my students to do: take the criticism to heart, and use it well. I'm not sure I agree with all of the comments, but I'll have them in mind when I revise the story and submit it somewhere else. I also need to work on More News From Nowhere, and to go back to the old-bats-in-space novel I started working on a couple of years ago. I actually posted on the Cabinet recently, and have lots of ideas for more entries. Letters to friends are on the list, too.

Read Even More. I probably read more than I do anything else, but now that I've made it through the entire run of Midsomer Murders twice on Netflix, I've got no afternoon distractions from the telly. TBS and I have stuff we watch when he gets home (because he's too brain dead after teaching to accomplish anything more impressive), but when I'm not out moving and growing things, I have a huge stack of books to begin or to finish. And then there's always Cat-watching time in the garden, which will need to be extended as the weather improves. Emma likes company when she's out, and I can't leave her entirely unsupervised. In  addition, there's nothing quite as peaceful as watching a cat and a dog snoozing away in the afternoon sun.

This is all very ambitious, I know. But since I'm too old and tired to be politically active any more, if I get even a little of it done, I'll have accomplished something. And so, Dear Reader(s), may the future be better than we have any right, at this moment, to expect.
Posted by Owlfarmer at 11:26 AM 6 comments: