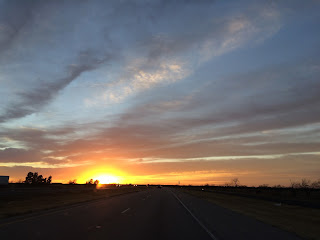 There is something quite wonderful about being born on the winter solstice. Some of those born in December rue the fact, due to the proximity of Christmas and other holidays. My sister is especially unlucky in that regard because she was born on Christmas day, although, as a devout Christian, she probably doesn't mind. But for me, having arrived on "The darkest evening of the year" (as Robert Frost so memorably put it in "Stopping By Woods on a Snowy Evening") has always seemed appropriate. I've long been interested in science in general, and in planetary sciences in particular, and the solstice is really what all the celebratory fuss is about anyway this time of year. In fact, according to an article in today's New York Times, were it not for the winter solstice, we probably wouldn't be here at all.

Five years ago, in 2012, I was happy to announce to my students (some of whom were alarmed by the promise of the end of days) that the only thing of any real importance happening on December 21 was my sixty-fifth birthday. The Maya did not, in fact, predict the end of the world on that day. Most cultures do celebrate the moment of "sun return" in some fashion, and others mold their calendars to include the moment, more or less. So the birth of Christ, for which there is no good information about an exact date, has traditionally been celebrated on the Roman date for the solstice, December 25.

The solstice marks the gradual return of longer days and shorter nights, leading up to the vernal equinox in March, the beginning of spring, and the path to the summer solstice. Daylight Savings Time, of course, throws a sabot into the machinery, but it's over before December, making the longer sunny minutes all the more important. I keep hoping that DST will go away eventually, as some states are trying to accomplish already, so we don't have the additional, artificial adjustment to make and can just go by seasonal changes.

My seventieth solstice celebration began last Saturday, when family gathered at my daughter's house. Her significant other shares the birthday with me, his fortieth, so we were joined by some of his family and my son, who flew in from Seattle. On Sunday, we all joined over sixty friends (including some of my favorite former students) at a local draft/movie house to watch The Last Jedi. My incomparable, amazing daughter had been planning this event for the past year, and it was quite a bash. Included in the group were the friend/colleague/teacher who inspired our interest in Continental philosophy, along with his travel writer/filmmaker wife and their astonishing daughter, and my oldest friend in the world (whom I hadn't seen in over fifty years) who happened to be making a road trip from the east and whose arrival coincided with the festivities. A smaller group congregated at our house later for more conversation and conviviality, providing a pleasant end to a memorable weekend.

The year has been a good one for some of my more distant friends, and my California family managed to escape the Lilac fire in Oceanside by living just outside the mandatory evacuation area, so despite our own lack of optimism about the state of the nation, things--as old Jews like me are fond of saying--could always be worse.

I should also mention that this solstice is made even more significant by the retirement from teaching of The Beloved Spouse. What optimism we can now gather is buoyed up by the fact that the current national lack of success in fostering education will not continue to rule our lives. The last twenty years have been more trying than rewarding, and we're now looking forward to doing what we haven't had the time or energy to do until now.

It thus seems fitting that Skywatch Friday occurs at just the right time to share a photo I took on December 21, 2014 on our last trip west, near Midland, Texas. There we spent our first night in our new "old" trailer, bought in anticipation of the retirement that is here at last.

So happy holidays, everyone; have a felicitous Sun Return.