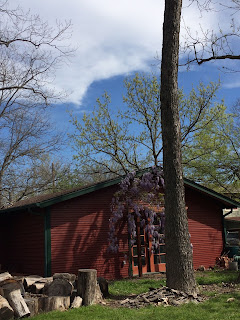 The back of the garage on the first day of Spring 2016, wisteria and burr oak in bud and bloom
Earth Day always seems like the beginning of a new year to me, tied in as it is with the promises provided by all of the phenological evidence of spring: budding, blooming, breeding, new grass, proliferating weeds (or, as some of us see them, wildflowers), more agreeable temperatures, and (this year and last) rain. Lots of rain. So much of it that I haven’t been able to plant the goodies I found down at Wildseed Farms in Fredericksburg a couple of weeks ago.  It’s worth noting that I gained a much stronger appreciation of the Texas landscape as we drove back roads framed with bluebonnets and other favorites. 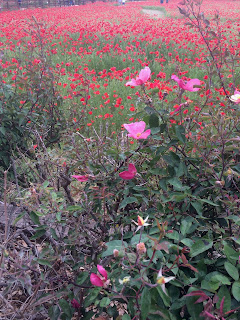 Gazing across the roses to the poppies at Wildseed Farms, Fredericksburg, Texas, April 2016

I tend to treat Earth Day as a new year as well, making resolutions that usually involve increasing the number of blog posts, planning gardens and home renovations, noting books to read over any breaks I get, and cleaning house. The housecleaning hasn’t started in earnest yet, but the increased number of breaks has got me reading again. Even Emma has joined me on my comfy chair in the living room to help me with Humboldt’s Cosmos. The book has reminded me that the notion of nature’s interconnectedness isn’t a Boomer idea, and didn’t begin with hippies in the ’70s. Alexander von Humboldt (1799) and Charles Darwin (1831), through their explorations of a much larger world (in terms of how long it took to get around in it), twigged to the intricacy of relationships throughout nature, and both might be appalled at how long its taken us to own up to the damage we’ve inflicted on the life of the planet.

When I think about how far our collective consciousness has risen since my first Earth Week Celebration in 1970 (the Martin Carey poster for which holds pride of place in my kitchen), I’m frequently hopeful that the future won’t become as dismal as I often imagine it will. It seems remarkable, though, that many of us have been so slow to become aware of issues like the enormous scale of food waste. As cognizant of major problems as I’d like to think I am, I only recently seem to have realized that aside from composting our scraps we hadn’t really thought about what goes bad in the fridge, or what doesn’t get eaten before it goes off. So the last year has seen us shopping much more conscientiously, buying only what can be frozen or cooked in a timely manner. And I’ve become a Chicken Stock Fanatic, saving every bit of bone and skin for broth-making, and using that for cooking up batches of whole grains. 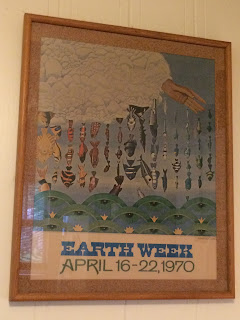 Martin Carey's poster for the first Earth Week
Awakening to the problem of general waste in one’s home seems to be much more widespread than I’d have thought only a year or two ago. Schumacher’s “small is beautiful” refrain has become a guiding principle among the Real Simple and Tiny House crowd. And among those of us empty nesters who will not be passing “heirlooms” on to grandchildren, downsizing is almost a new career.  As TBS and I plan for our retirement, the need to rid ourselves of all the crap we’ve accumulated in our nearly thirty years together is becoming paramount, and doing so without enlarging the landfills has meant doing everything but throwing out. Reusing, repairing, up-cycling, donating, and (if necessary) recycling are all strategies we’re using. The result has been a vast reduction in trash output (one big green bin per month instead of two; some of our neighbors do two per week) and even the recycle bin goes out at most twice per month. We used to pride ourselves on putting out only the one blue bin (recyclables) a week, but now we’re working on two no-trash-at-all days per month, when neither of the bins go out.

What some folks don’t realize, I think, is that healthful eating and reduced waste go together. Eating fresh food as much as possible, cooking at home, growing one’s own veg and herbs, and avoiding processed foods in general means less packaging and less consumer waste, as well as less wasted food. There's nothing like making everything from scratch and the time and effort involved to make one much more inclined to use it all up.

The other major change in our own lives has come from the wide availability of digital magazines. I’ve been something of a joke among my family because I hate even to recycle old shelter publications, so that I had stacks of copies of Old House Journal, Old House Interiors, Style 1900, and even a fifteen-year run of Martha Stewart Living. Add to that cookery magazines like Eating Well, and gardening journals like Organic Gardening. These are now being gone through, with saving only really useful articles the priority. They’re being replaced by subscriptions through Zinio and Apple’s Newsstand. And although I’m not terribly happy about the demise of print, digital publications often have multimedia features that enhance their usefulness. No need to hoard stacks of National Geographic, Folks. The digital version has video!

These are only a couple of changes, and from the looks of things around the neighborhood, the overall impact is pretty small. But I see in my children and some of my students a generation much more aware of the consequences of human action that we were at that age. What they do with that knowledge will determine their own future, and I’m more hopeful than I once was that we haven’t yet messed things up so badly that they won’t be able to save the world.
Posted by Owlfarmer at 12:18 PM No comments: