I probably spend an inordinate amount of time on this blog grousing about the weather. Usually by this time of year it's started getting hot, and the tomatoes are already overheated and about to give up. But I am currently reminded of a terrifying novel I began reading just before my valve replacement surgery eleven years ago: Robert Charles Wilson's Darwinia, a sort of alternate history/quasi-horror steampunky sort of story about a giant blob of vegetation's dropping on top of Europe in the early twentieth century.

Kind of what our little "farm" looks like now. Just outside our kitchen, and to the east of our greenhouse our Virginia Creeper and our neighbor's ivy have joined forces to cover just about everything they can, as you can see from the opening photo. And to the west of the kitchen and the laundry room, the two vines (plus a bit of miscellaneous wild grapes) are conniving to keep the sun out of the kitchen in the afternoons--if we ever get much more sun. 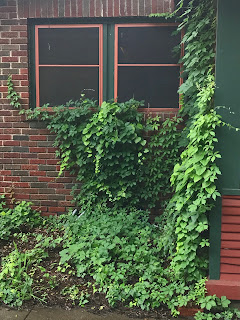 It's difficult to find local precipitation totals because it can be pouring at our house and sunny across town. But we've had some rain nearly every day for the last two months, sometimes in sheets, and The Beloved Spouse recently read something about "record rainfall in McKinney." On our way home from a tardy Mother's Day celebration last weekend in Dallas, we were greeted at the city limits by this: 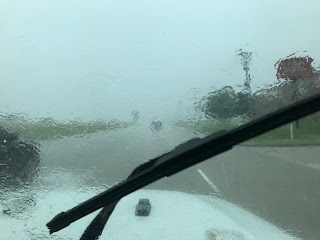 Although April and May are usually our wettest months, this year's rain has meant repeated backyard flooding, even though it's not dangerous for us because we're somewhat elevated and the water flows downhill to the houses at the south end of the street. Nylah spends a good portion of her time in such weather "crated" next to my side of the bed upstairs; she was scared witless by a thunderbolt not long after she came to live here, and she's adopted several semi-enclosed areas for cowering during thunderstorms. Molly, on the other hand, is intrepid. She also has a thunderstorm space, but she's usually fine as long as lightning isn't flashing all over and being punctuated by really loud thunderclaps. She even enjoys light rain, if it means she can go out of doors. She gamely tiptoes through puddles a couple of inches deep, and leaps over deeper ones.

The result of all this wealth of moisture is that I'm being constantly reminded of warm, muggy, Taiwanese spring weather, and the onset of typhoon season. The highlight of my first year in Taiwan (we arrived in January of 1958) was the category 5 Typhoon Winnie that July, which blew past the north of the island and weakened on route to the mainland. Taipei was heavily flooded, although our Japanese-built house was raised high enough above ground to stay dry. The following year the island was bisected by Typhoon Joan, another category 5, but by that time we had moved up to Yangmingshan (now a national park) and were better protected by the mountains. In September of 1961 we got whacked with Typhoon Pamela (another 5), causing our living room roof to fall in, which explains why I completely freak out now every time there's a tornado warning. Pamela hit Taiwan with winds of about 180 mph. Since this was all happening in the Cold War, we were also ducking and covering at school due to the military confrontations taking place between Taiwan and the mainland that summer. Both of my parents were involved in these events--my mother as the only reporter on Quemoy when TSHTF, and my father in his role as a "listener" for the Air Force (long story--which I may tell sometime, since the events are back in the news). As a ten year-old, though, I was more preoccupied with being a kid and thought it was all such larks.

Hurricane season begins this year on June 1, so I'm hoping the weather will settle down for a while before something comes roaring in from the Gulf.  My main problem with hurricanes around here is that, this far inland, they're notorious progenitors of tornadoes.

At any rate, all the rain has meant that the garden is now quite lush. And it really does look, in some places, as though a big lump of space flora has landed on various parts of the back quarter acre.

To add to the increasingly alien landscape, Molly recently found something interesting on one of her hunting expeditions: an Eyed Elater (Click Beetle), according to the Texas A&M Agrilife Extension site. It might well have dropped off another planet itself, since I've never seen one before. We thought it was dead, but turned out to be a master at fakery (in more ways than one), and eventually left the old garden table where we had let it recover.

All manner of mushrooms and other fungi grow on the property, due in large part to the amount of ground up old trees that have been added over the years. The newest variety had been generated by the added moisture, and seems to be some kind of Bird's Nest fungus but without any little "eggs." There are hundreds of them, none more than about 1 to 2 cm in diameter. More alien life forms.

When I started writing this post yesterday afternoon, the sun was out, so I took a shot of the sky. Nothing exceptional to most folks, I imagine, but it was just wonderful to see blue sky and white fluffy clouds. The ground even dried out a bit. But by evening it was muggy and warm enough to turn on the air con to keep the dog from panting. By midnight another line of drenching storms came thumping through, followed by an even noisier one a couple of hours later. 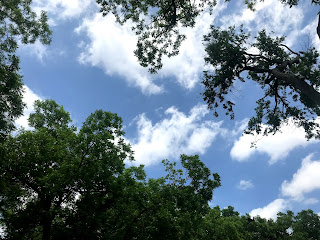 So this morning we were living in a swamp again, although the sun's back out (for now). More rain is forecast for the weekend and into next week. I know we'll miss this in August when we're mired (not exactly the right word) in drought, but thanks to river flooding in many areas, some people are having a much tougher time than we are. We actually sat out with our evening tipple and enjoyed relative quiet last evening, before it started clouding up again.

In reality, it's probably only slightly warmer and wetter than it has been since we moved to this house, and learning to live with the changes is going to be part of life in the era of climate change and the abundant challenges we're all facing. So I hope everyone has a good weekend, that you're all vaxxed up (but still masking appropriately) and that life is--in one way or another--beginning to take on the trappings of normality.