It's getting so much more difficult not to submit to pessimism that writing my annual celebratory post for Earth Day is turning into a chore. And even though spring is burgeoning beautifully around the Accidental Garden, other stuff keeps impinging on my optimism--and my enjoyment.

In fact, the impending arrival of family from Idaho and Baja has boosted my morale somewhat, and hastened aspects of Swedish Death Cleaning that I've been avoiding. Calling it "spring cleaning" is probably less morbid, but it's all part of the same process. If it weren't for concurrent Old House Plumbing Problems, things would be relatively peachy. In fact, though, we're getting some practice with off-grid living, what with using Porco's loo as an outhouse, and disposing of dishwater on the north lawny bit of the garden.

Having pretty much abandoned dreams of moving to somewhere more amenable, we've chosen to treat the property as an oasis from Texas nincompoopery. Re-wilding proceeds apace, with only a few domesticated areas, and the perennials are beginning to bloom. I'm promised an amazing show of Byzantine gladioli this year, since they've spread into odd corners of the garden, and the newcomers are actually blooming first--peeking out from spots far away from the original patch. I keep thinking that I should transplant more purposefully, but never seem to get around to it. So these lovely flowers (which began as a single plant under the nandina shrubs that came with the house) are doing it all themselves. A few have even made it around to the front border via the iris bed. This is what they looked like last year at about this time (in the right foreground): 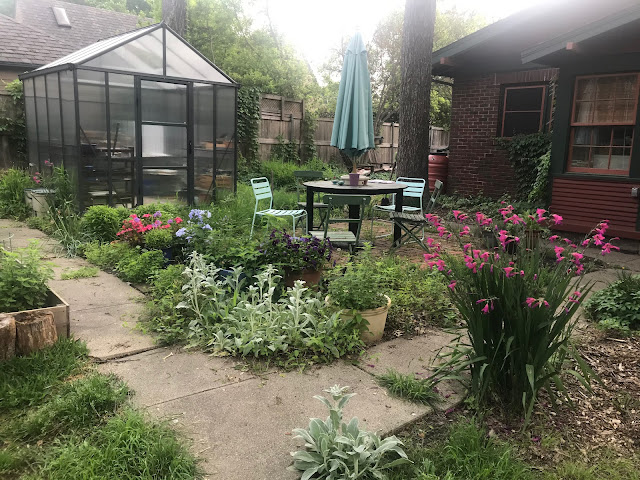 However, everything's late this year. The wisteria bloomed about a week late, but now the vines and blooms have filled out and the amazing scent is already depleted. The Chinaberry tree suffered much from last year's bad freeze, and never did recover. It's leafed out in straggly bits, but there haven't been any blooms and there's just too much dead wood for safety. So it will have to be cut down when the arborists come to do their every-so-often pruning next month.

But now, by Earth Day, the yard is teeming with wildlife. There have been some gratifying butterfly visits, including the swallowtail in the opening photo, and even an orgy of monarchs: three, all having at each other. The honeysuckle has grown to welcoming proportions for pollinators, and we get to enjoy them over a nice tipple in the evening. Two resident toads have appeared, as well as numerous anoles. Unfortunately for them, Molly is an expert lizard hunter, and we've had to rescue two, sans tails. But they love the greenhouse, which is being transformed into a wunderkammer*  (housing my collection of oddments as well as gardening tools). I have no way of heating it yet, so it's useless for starting plants. Better as an inviting outbuilding for gathering old nests, owl pellets, bones, skeletons, fossils, and little treasures picked up in our travels. Plus the abandoned egg cases Shelob left when she departed last fall. The anoles can easily escape through the vent when it gets too warm, so I don't have to worry about broiling them alive when I close the door.

Baby birds and animals have been abundant. Bunnies and squirrels mainly, and myriad wrens. We did have a bit of drama when Molly caught one little wren and injured it slightly. I managed to help it recover, and left it where the parents could do their work. I last saw it hopping down the alley with mom and dad in attendance, after a couple of days' recovery.

Even though she's done some damage to the wildlife population, Molly has become such an obedient and charming cat that if there is mayhem, it's almost entirely our fault for not keeping an eye on her. So when there's real work to do, we have to take turns cat-watching, or confine her to the house until we can be more responsible cat wranglers.
In 1970, when I celebrated the first Earth Day in Philadelphia, I was owned by another tabby--a manx born with spina bifida, and as a result couldn't wreak much havoc on local wildlife. At the time I had no idea of what my life would be like over fifty years later. We were all so sanguine then, sure that in the next half century we'd have addressed the problems that were becoming so apparent then.
But we haven't. Things are much worse, and peril confronts us at every turn. I keep trying to find sources of hope, like Barack Obama's new Netflix series on the world's national parks and the possibilities they embody, and these serve as anodynes to help salve the anxiety of living in this moment. The best way to get through all of this, though, seems to be to keep the garden going and to enjoy the companionship of our two rescue beasts. And to enjoy their enjoyment of their own little peaceable kingdom. 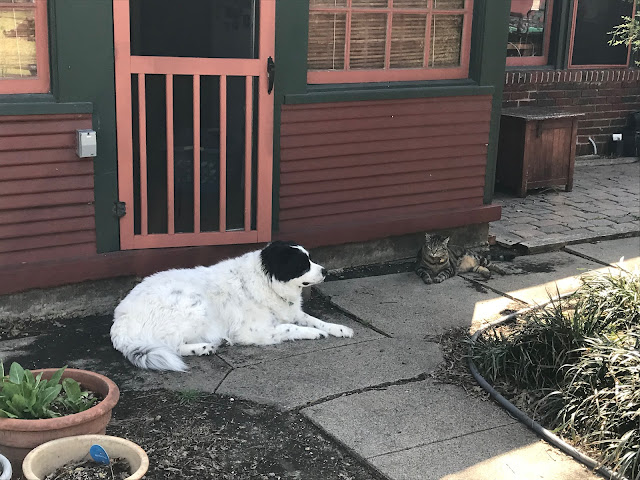 Happy Earth Day, people. May next year bring better news, and renewed hope.
Photo notes: The leafing-out of trees has reduced available sky considerably. But if you look closely at the butterfly picture, you'll see some blue peeking through. So happy Skywatch Friday, too.
*Turning the greenhouse-that-isn't-really-a-greenhouse into a Cabinet of Curiosities is a new project whose progress will be documented on Owl's Cabinet of Wonders.
Posted by Owlfarmer at 11:46 AM 3 comments: