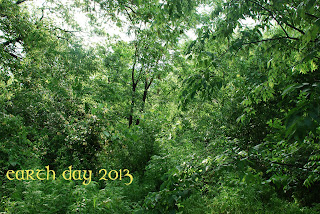 Over the past five years I've managed to post on or about Earth Day (last year there were two essays), in an effort to recognize a significant moment in U.S. environmental history, and to reflect on themes that prompted me to create Owl's Farm in the first place. In my current state of time-deprivation, it's difficult for me to post more than a few times a year, but this seems as good a time as any to think about change in general, as well as particular changes over the last twelve months.

The first celebration I actually remember took place in Philadelphia in 1970, and I still have the poster I bought during those festivities. Today it happily adorns my kitchen wall and reminds me that in this little corner of the universe, every day is, in some way, Earth Day.

If I've learned anything over the years, it's that we can't really afford to lose our focus on what needs to be done, and I'm occasionally heartened by the fact that celebrants are no longer just cranky old folks like myself, but a include a much broader spectrum of citizens.  I don't actually go out and march or dance in the street anymore, but I do spend time out on the property, taking inventory, and reflecting over the past year.  This time, the view from the back yard toward the house is far more pleasant than it used to be, thanks to some major renovations last summer.  New paint, a new bathroom and work on the old one (including new, very low-flow toilets), R50 cotton insulation in the attic, and solar screening will make the coming summer more livable.  Plans for a geothermal heating and cooling system had to be abandoned because the cost would have made the rest impossible. But our energy bills are fairly low anyway, and we bought a portable air conditioner that works more efficiently than our old window unit. The attic fans have been repaired, which will double the air flow through the house, so our bills will probably be even lower, and our power use reduced even more.

Over the last few months, as I've talked with students and colleagues about what we've been doing with the house, I've realized that there are some fairly simple strategies involved with lightening one's impact on the planet that most people never really think about.  None of them require much cash outlay, they do some significant good, and they confer a bit of peace and satisfaction upon their practitioners.

Shorter showers  A couple of years ago a conversation on Orion's forum took this one on, and many writers saw it as purely symbolic.  Real activism, they suggested, needed much more significant action.  But think about it.  If most people take daily ten- or twenty-minute showers, and then cut those in half, common sense (plus a bit of math) tells us that it all adds up. I'm talking water-savings here, in a drought-stricken region, rather than money, because monetary savings are small ($9/year or so).  A four-person family can make a bigger dent if everyone's on board.  Subtract the cost of a cute kitchen timer, and you're still saving water even if the timer costs a tenner.

Even better, take fewer showers.  In her terrific 2010 book, Green Barbarians, Ellen Sandbeck (her blog is here) noted many ways in which our overly sanitized society wastes water and money on all manner of stuff designed to eradicate every possible germ (good or bad) and make us not smell like human beings. But we don't actually need to shower every day in order to be civilized or even healthy.  It's thus quite possible to forgo a shower without contaminating the earth.

Rain Barrels We bought four (we had one) when we had new gutters installed last summer, and the only problem we foresee is keeping them from becoming mosquito breeding farms when they're over-filled after a rain.  But BT mosquito dunks take care of that problem (as does a judicious lowering of the water level), and there's enough water in each one to take care of gardening needs quite easily.  They won't help much with the lawn, but I'm also working on minimizing the amount of non-productive farmland.  We do need romp space for the dogs, but over the next year or so I'll be replacing as much St. Augustine as I can with fruiting shrubs and low-maintenance ground covers.  Since the non-productive area still provides ground-water recharge,  I won't feel guilty if every square inch isn't edible.  But many herbs make good ground covers anyway, and I can always give extras away to needy culinary students.

Compost Anything edible can be composted and turned into soil and/or fertilizer.  For about a hundred bucks last year I snagged two bins for making Bokashi compost--a Japanese technique that essentially ferments your food waste, including protein sources like bits of meat and cheese.  The ongoing investment in the probiotic granules needed in the process is the only expense after the bins.  I bought two, and rotate them. When one is "done" it sits for a couple of weeks, and the contents then buried in the garden.  If, like us, you've vastly reduced your food waste,  the process can be rather leisurely.  It might take a month or more to fill up a bin (even when spent flowers and other non-food plant materials are added). In the meantime, you also drain off liquid that can be diluted with water to use as a liquid fertilizer.  The areas in the garden where the first two batches were buried are now lushly verdant.  Some stuff still ends up in the big compost bins (weeds, mostly), and most of our coffee grounds are used on the roses, but we end up with about four Bokashi "crops" a year. We're also considering a method called hugelkultur, which involves burying our brush pile and covering it with the excavated dirt to form raised beds.  This would solve the problem of having to use the chipper-shredder (the only gas-powered yard appliance we own). We get a large amount of brush from the trees on the property (rain + wind = downed limbs), and seldom have the time or energy to deal with it.  Some gets used for firewood, but the rest is just sitting there. Being a brush-pile.

Note: This week's explosion in West reminds us all too painfully of the price we pay for depending on chemical fertilizers.  This world really needs to find ways to feed its population without relying on toxic and potentially disastrous combinations of chemicals.

Growth Even folks who don't have large sunny spaces suitable for food crops can grow herbs.  Many herbs are perennials, and also flower, so they can take the place of ornamental annuals.  I now have a large, expanding crop of Greek oregano growing in the front border, and have started taking bits of it to plant in obscure corners of the property.  I'm also thinking very seriously of planting the parkway with peppermint, which is otherwise pretty invasive and has to be grown in isolation or in pots.  But a few strategically placed mint transplants next to the street will look better than the weeds that grow there now, and will smell nice when dogs walk on them, and when their owners clean up after their poopy pooches.

The abundance of shade from our 18 trees (not counting the ones growing along the back alley, which have been planted by birds and squirrels and left to flourish by us, since they mask the houses behind us and offer some considerable privacy) means that our veg-growing success is mixed.  I'm hopeful about the tomatoes, peppers, and tomatillos I have planted, and will try beans and radishes as well.  Now that we have some sunny space in the side yard (which was fenced by a cranky new neighbor last summer), I may try something there--especially since that's where one of the Bokashi batches was buried, and where the next one will be as well.

Anything green we grow lowers our carbon footprint, and if we're smart it will also lower our food bills without contributing to Big Agriculture.  People with kids can accomplish even more, because growing things provides all manner of lesson-material and connects children with the planet in ways they'll never forget.  As I'm fond of mentioning, all the talk about the financial deficit we're leaving them ignores the environmental mess they're inheriting if we don't radically alter our habits, soon. Financial deficits and surpluses are ephemeral; they can be eradicated as fast as they're incurred or accumulated. Environmental deficits, on the other hand, can take millions of years to correct.  And that's if we get started today.

Image note: The photo was taken a couple of years ago in what was once called "the accidental garden" in the southwest corner of our half-acre property. It later turned into our own personal carbon sink, after years of purposeful neglect turned it semi-wild.  It will regain some of its garden-ness when we reclaim some of it as cropland after attempting to establish a hugelkultur patch this summer.
Posted by Owlfarmer at 3:18 PM 2 comments: