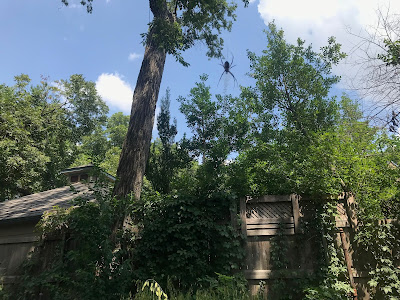 As the summer begins to wane, we on the Farm find ourselves busier than we've been in quite a while. There are injured trees to fell, caravan projects to complete, software programs to learn, clearing out to accomplish--all in addition to the daily necessities of newspaper reading, puzzle solving, cooking, cleaning, laundry, and pet service.

I suppose I've mentioned innumerable times that we do a large measure of the daily stuff without benefit of central air conditioning. This isn't generally a problem, at least in the morning, when things are cool enough (if we're sitting under fans) to read the paper, do the crosswords, and even tidy up. But after noon, we try to shut down and work in one of the rooms with a window unit (living room, snug, study, bedroom) in order to conserve power. Fortunately, Porco has its own air con, so any of the projects we're undertaking in preparation for our rather ambitious, month-long road trip west can be done in relative comfort.

We still take time in the morning and evening to spend time out of doors with the animals, and so our activities are pretty well-paced. Not long ago, we installed a more efficient ceiling fan in the kitchen, which makes it easier to cook. If I'm on the ball, I get something prepped and put together in the morning, then put it in the oven to bake later, rather than simmer on the stove top. Or we have salad nights. Having come from pioneer stock that made their lives in the western Nevadan and eastern Californian basin and range deserts, I have good models for dealing with heat, and because the humidity demonstrates the relative abundance of water in north Texas, there is really little to complain about.

But climate change is certainly "messaging" us, and strongly nudging us in the direction of some preparatory gestures. Last winter's Big Freeze (as they're now calling it in the Daily Poop) has prompted us to buy a lovely ceramic cast iron log burner, which will take its place in front of the fireplace at the end of this month. The greenhouse also falls into the prepper device category, and after we're home from our trip, stepped up efforts to fortify our food-growing capabilities will begin: enhancing the veg space wherever we can. My old, battered copy of Ruth Stout's No Work Garden Book (saved from some flood or another), and Helen and Scott Nearing's books on the Good Life are on my autumn reading list, and there are several more books on my shelves with similar themes: making do with less, all written before it became trendy again to "make do and mend."

Work on Porco Rosso has produced new "classic" faucets with metal handles, a cargo carrier for hauling what TBS quaintly refers to as the "honey wagon" (don't ask) and extra water. We also installed, inexpertly but eventually adequately, a new awning. The old one was once white, but the spring rains and dying trees had ruined it, so we got something a bit too cute but much more serviceable. 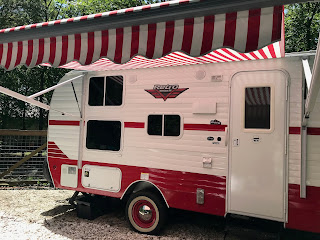 There are also a new lock and new keys, after it proved too difficult to get a damaged key replaced. We also got better locking devices for the exterior storage bins. Interior storage will be enhanced with numerous IKEA amenities, from boxes to baskets to small shelves for stashing spices. And my makeshift pillowslip curtains will finally be cut to fit and insulated. We're planning to leave just before the solstice, camping first at Cedar Breaks State Park on the night of the Full Corn Moon (they call it the Harvest moon around here, but I grew up with the Corn moon). The new binoculars TBS gave me for my last birthday will be put to use taking photos for a later Skywatch entry, from a good Dark Sky site.

The travel planning is pretty much complete now, and we've had time to clear out some of the winter damage and tired remains of spring's extravagant growth. Pottering around in the yard has led to a few wildlife discoveries, the best of which is another spider. Last time, I included a shot of a tiny argiope in a cedar tree--the first I'd seen in years. This last week, however, we discovered a much larger variety and I've been watching it faithfully over several days. The first time I noticed her, Nylah had already barged through her very large web (strung between the downspout and rain butt on the northwest corner of the house, and a large pecan tree about six feet away), and the spider (now known as Shelob; much smaller, but with similar habits, for those of you Tolkien fans) was already busy repairing it.

My feline correspondent, Tigger (see last post's comments) hasn't seen this variety before, so I thought I'd provide her a much larger example. Two days ago, there was also ample evidence of mayhem. I'm including a sequence of photos to illustrate the dramatic goings on, and to give you (perhaps) an idea of why my family has always been so fascinated by these industrious beasties. 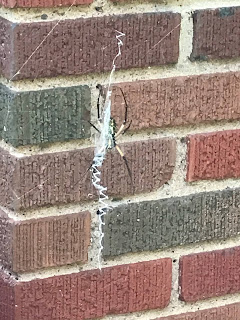 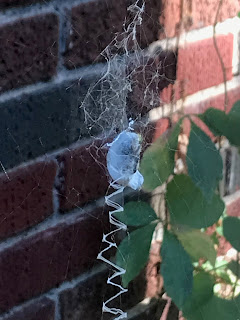 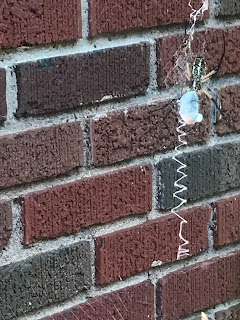 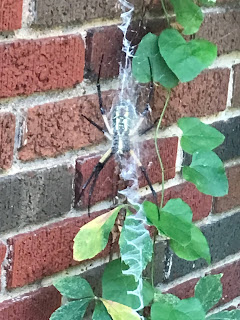 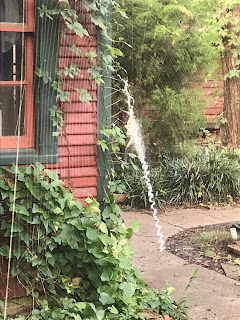 Argiopes are orb spinners, which you should be able to see in the last picture; it and the one above it were taken after she had devoured her packet of Japanese beetle. The opening shot on this post is the only one taken from behind the web. At first she was pretty skittish, and every time I came near, she'd run up to the eave to hide. But more recently, I've been able to get closer--although getting my cheesy excuse for a Skywatch Friday entry required crouching down in back of the web.

The next few days are forecast to be a little cooler (93F instead of today's 97), although the rain promised for the weekend seems to have left the map. But now that the major project work is done, I'll be spending a few more hours trying to master a new web design program (Pinegrow) which I'm hoping will allow me to get back to work on revising the old owlfarmer.com page and a couple of other web efforts.

Stay safe, folks. And have a good weekend (to those of you for whom weekends still mean something).