It's The Oikonomos, Stupid! 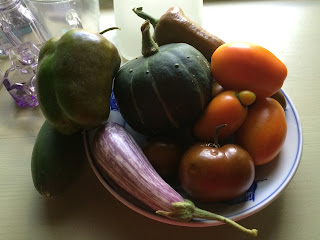 Although I’ve already addressed this issue at least once previously, I’m getting really tired of seeing organic farming practices and preferences for organic food beaten up as misguided or even as a kind of pseudoscience.

A question on Quora, for example, that showed up on my feed recently, asks “What are some examples of pseudoscience in day to day life that even educated people aren’t aware of?” One of the two answers includes a list of “all kinds of nonsense that highly educated people believe,” the first of which is “Organic food is healthier.” The question is an old one, I think, and the answer was updated a year ago, so (admittedly) this isn’t exactly news. I pretty much agree with most of the other examples (claims that gluten is bad, vaccines are bad, etc.), but this and the “GMOs are bad” example are based on a shallow understanding of both the principles of organic farming and the nature of objections about GMOs (see the above-linked essay, "It's Not the Science, It's the Ethics").

Then, from the normally quite sane New Scientist  comes a snarky article by Michael  Le Page, “Care about Earth? Ditch Organic Food”  (Dec. 3, p. 21). In fact, the article is about the idea of labeling food for climate impact (like carbon footprint), which doesn’t sound like a bad idea to me, nor would it to most organic “foodies.” But Le Page’s complaint is about how organic farming doesn’t help wildlife, because of lower yields which require more land to produce—and in the tropics this means cutting down more rain forests. He also states that “organic food also results in higher greenhouse gas emissions than conventional farming.” Boy would I like to see the evidence for this, considering the fact that conventional farming relies on petrochemicals for fertilizers, and organic farming uses existing manures (green and animal-based) rather than manufactured ones. But the premise that in the tropics, organic farming is less productive than conventional can be argued against (see the results of a long-term study by the Swiss research institute FiBL) and my primary objection is that he just doesn’t "get" the basic reasons for organic practices in the first place.

Even if organic food were “healthier” (whatever that entails; he seems to think that it isn’t, but the jury seems still to be out on the general question ), that’s not even the main point. The real reasons for choosing organic foods over conventionally grown, or organic milk over conventionally processed milk (etc.) lie in an ethical concern for the basic economics of human life. In order to support my own claim, however, I have to provide a bit of an etymology lesson.

The word, “economics” comes from the Greek oikos (home) and nomos (usage, custom). The old high school course for girls, “home economics,” is thus something of a pleonasm, but never mind. Economy is fundamentally about much more than finances, hedge funds, and the GDP; it’s about how we live in the world. Eco-poets like Aldo Leopold, Henry David Thoreau, Joseph Wood Krutch, William Morris, and Wendell Berry have all written about the relationship between human beings and the planet, and their influence can be seen in the growing interest in living in such a way as to ensure a viable future for our descendants.

Modern human beings don’t have a great track record for home-keeping (hence my skepticism about our ability to safely modify genes). We’ve plundered the planet seeking metals and fossil fuels to create the industrial societies that have radically changed our impact on climate, land use, and water in the geological microsecond of the last two hundred years.  It shouldn’t be surprising that an increasing number of thoughtful people (especially those with children and grandchildren) are trying to find ways to create a sustainable future against mounting odds (and obstructionist politics).

So, when folks suggest caution in adopting genetically modified organisms, asking that products containing them be labeled, they’re not necessarily tossing science out the window in favor of scary predictions by Luddites and Saboteurs. Some GMO seeds, like Monsanto’s Roundup-resistant corn, allow more significant use of pesticides on corn crops, and I would genuinely like to know if a corn product I’m buying has had a close encounter with glyphosate pesticides like Roundup. Of course, I think there are other reasons to be suspicious about our ability to safely and effectively mess with plant and animal genes in the first place, so I’d just as soon know. All labeling does is to alert me as to whether or not a product has been modified, and if so to allow me to decide whether or not to buy it. I’d be even happier if labels could tell me why the company thought genetic manipulation was necessary in the first place: higher crop yields, higher nutrient values? Maybe. Better pesticide resistance? No.

Calling this kind of suspicion (or skepticism, actually) “pseudoscience” suggests that all GMOs are fine, pose no potential threat, and that we should just sit back and let Monsanto do what it wants. Associating people who choose organically produced food with people who believe that psychic powers exist or that Intelligent Design is actual science tars legitimate researchers in food ecology  with the brush of the anti-intellectual fringe that’s already gaining more and more political power.

I’m painfully aware that there does exist a kind of war on science being promulgated by those with religious and political beliefs that enable them to ignore the data and the evidence for evolution, climate change, vaccine safety, and other such issues. The anti-intellectual climate in this country is what made me retire when I did, and what makes me so pessimistic about our future. But those who pooh-pooh organic practices or GMO skepticism, dismissing those who question received doctrine as “anti-science,” are committing the same logical errors as the climate change deniers. All we ask is that people look at the evidence. In many cases (as with the FiBL study named above), legitimate scientific data are out there. The notion that we should “ditch organic food” if we “care about the planet” is both smug and ludicrous.

Being pro-science would seem to require an open-minded approach to explanation and experiment. Unless there are substantial data to suggest that organic practices are harmful to the well-being of the planet (to the planetary oikonomos), we should probably embrace anything that feeds us without destroying the ecosystems that provide our sustenance. The kinds of farming and gardening invented in the neolithic (and are thus thousands of years old) may not be able to efficiently feed vast urban populations—but the principles that are embodied in organic food production and other sustainable agricultural systems may help us to avoid the collateral damage inflicted by fossil fuel-based industrial agriculture (and unthinking use of chemicals in home gardens)—some of which (such as endocrine disruption in children) is only now being discovered and studied. Lowering our carbon footprint (both individual and cultural) is an important part of the equation, but so are reducing our reliance on chemicals that kill pollinators and may have long-term, as-yet-undiscovered health consequences.

I'm not asking for political correctness or for tiptoeing around the tender feelings of tree huggers like myself. Tell it like it is, by all means; but be willing to accept the healthy skepticism embodied in sustainability movements so that the damage done by the real anti-science goblins likely to exert their influence in the next four years won’t be irreparable.

Posted by Owlfarmer at 11:52 AM No comments: