Texas is one of the states in which the Plague is increasing its toll, so we've had to focus inward, to the spaces on our half acre that harbor lives floral and faunal. We've been out to vote (early, in a runoff) and the Beloved Spouse to gather supplies for some work on the property, but life is pretty much lived here, within the property line.

Every morning Molly starts mewling to be taken out to the back yard for her early perambulation, so I usually take the opportunity to inventory phenological signs of summer's progression, and to address pressing issues. Like wilting basil. I've also been doing a fifteen-minute Qigong practice most mornings, and sometimes another during the evening sojourn before suppertime. But it really is nice to move through the Eight Brocades or the eighteen forms of Shibashi out under the trees--especially if there's a bit of breeze.


At any rate, by the time I've finished, Molly has usually decided that it's time to go in for "cookies"  (the announcement of which usually brings her out from under the shrubbery where she's been watching me), and happily follows or precedes me into the house for her promised bit of freeze-dried salmon. Now that she's settled into this pattern I can relax and not worry about her trying to escape, and she often follows me around as I check to see how many figs are ripe (only one so far, and it was luscious, right off the tree), how many new varieties of fungus have sprung up, what plants may be budding or blooming.

Occasionally we'll discover the aftermath of predatory violence, like yesterday when we found the feathers of a small, newly fledged mockingbird scattered about. Barred owls, sharp-shinned hawks, and other large raptors frequent the property, and although I admire them immensely, I'm ambivalent about their presence after the demise of Molly's predecessor, Emma.

Emma is not the only animal missing these days. There are exactly two pair of fireflies evident in our back yard. And I've only seen one bat this year. I imagine that the only reason we've got any fireflies at all is because we don't use any chemicals anywhere, and only BT bits in water dishes and bird baths (to keep the mozzie population down). But it's hard not to suspect that dire happenings are afoot. A heat dome is settling on most of the US over the next couple of weeks, drying things up while holding in the humidity, evaporating what's left of the recent rains from out of the soil. Cracks are appearing in the bits of the yard not covered by the recent mulch distribution. I haven't yet watered anything but the fig tree and the lone tomato plant with a little old-fashioned two-hole sprinkler. Everything else gets doused with water from a jug or a hand-held spray attachment. Humanity is dealing with its pandemic, but we seem to have inflicted apocalypse on the rest of the natural world.

Still, not everything seems quite lost--yet. Occasionally I encounter small, beautiful things that renew my natural optimism. Now that the local Carolina Wrens have hatched and raised their first crop of babies, they seem to be nesting again. It got quite noisy out back while the last birdlets were being weaned, but now it's quiet again. Just yesterday, I noticed that a wren had been nosing around a little bird house on our front porch, and I peeped in one of the two "apartments" to see three tiny eggs. A little while later I went back to take another look, and this time disturbed the mom, who flittered out--but was back soon after I left. So I put a couple of rocks into a metal bowl of water to give her a spot nearby to drink, and have been staying away from the nest. 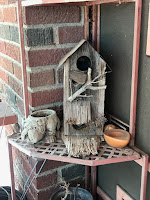 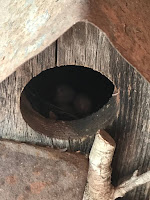 After she's dealt with this batch, I'll move the box up to the top of a porch pedestal to lessen the chance of predator attack, and so I'll have a clearer view from inside the screened porch. Unexpected events like these come about infrequently, but they do provide a bit of cheer in increasingly dreary times.

As the numbers of Covid-stricken humans go up in Texas I keep hoping that the cost of running around "free" from restrictions will finally become apparent to the deniers. But watching the health care workers pleading for sanity on nightly newscasts is heart-breaking and doesn't do much to raise my regard for the willfully ignorant.

So much of what's happening is evidence of a massive, complex, problem that involves ignorance and anthropocentricity on a scale that might not be remediable. What our species has been doing to the natural world is a big part of what got us into this pickle and when I think of the future that awaits the children of former students and my own children's friends' kids, there doesn't seem to be much room for hope. If the world manages to pull through this latest test of our collective wisdom and ingenuity, we'll have earned another chance. But in this particular socio-political moment, the if seems awfully tenuous.

Right now, my focus on the future involves seeing whether or not those baby wrens hatch.
Posted by Owlfarmer at 11:19 AM 2 comments: