Another Autumn in Exile 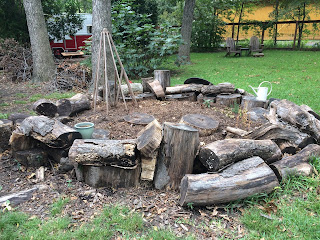 As I watch the fuzz-tailed tree rats rummaging in our newly installed raised bed (we filled up "Stump Henge" with compost and mulch, and have planted a few things therein), I realize just how not-cute squirrels really are. They eat our pears before they're anywhere near ripe, and nibble on baby pecans and spit out what they don't like, littering the ground with sticky crumbles of unripe nuts.  They bury more mature nuts and acorns all over the yard, necessitating difficult (for me) removal after the infant trees have sprouted (said squirrels having forgotten where they planted they're winter stores). 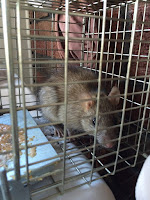 Yes, they do also dance and frolic and have amusing sex, but they're essentially a general nuisance. Not, perhaps as much as are the mice we still haven't completely eradicated, despite the elaborate treats The Beloved Spouse baits our Havahart traps with (peanut butter and bananas, or almond butter and cat kibbles). Although actually mice, these critters are the size of small Chicago rats. We've exiled quite a few, to a forested area several miles away, but some have evaded capture. Mrs. Peel, the resident mouser, seems not to frighten them in the least, and has been known to watch them scurry by without a twitch on her part. I did, however, observe her making a lame attempt at chasing a squirrel a few days ago, which accomplished nothing but did afford her a bit of exercise. What backyard wildlife advocates don't always tell you is that feeding birds often attracts other varmints, and unless you confine your feeding to specific species with diets unattractive to rodents (finches who like niger seed, for example), placing feeders near one's house is not recommended for tender-hearted folk like us who are ethically unable to poison cute, furry little mammals, no matter how annoying they are.

As I've mentioned before, our "House Clock" marks the Autumnal Equinox when the sunrise no longer sheds direct light through the east-facing dining room window (although it took a day longer than it should), and this year I noticed for the first time that for a few days around the equinox sunlight reaches all the way from the front door, through the sitting room, central hallway, and study onto my William Morris-focused bookshelf at the very back of the house--thus illuminating Morris and the Pre-raphaelites nicely.

Upon researching the answer to a question that came up at tennis practice (TBS is the assistant coach at his college, and some of the players are from the southern hemisphere), I discovered that contrary to popular belief around here, equinoxes and solstices do not necessarily mark the beginnings of seasons in the rest of the world. In fact,  Cecil Adams, in a column for The Straight Dope, notes that even in the northern hemisphere we don't all agree on when seasons begin and end.  But regardless of what measure we use, by October in North Texas, as my father would say, "fall has fell." Stuff is turning brown, hundred-degree days are gone, the Monarchs are migrating, fall flowers are blooming (attracting the Monarchs), and the quality of daylight is beginning to change. For reasons I don't quite understand daylight savings time is lasting an extra week this year, but I wish they'd just keep it year round.

The weather is also co-operating, with pleasant temperatures, occasionally crisp air, and just the right amount of rain. I mow the lawn in front to keep up appearances, but will probably let the back go until the leaves are down and ready to be mulched in. The mozzies are still around, though, which means that I have to spray down if I want to sit out with the animals, but I'll have to wait until the first freeze before I can do without the Deet. As awful as I know that stuff is, it's the only thing besides Picaridin that will keep the blood-suckers off me. Picaridin is the lesser of evils, but hard to find. I found one unscented brand that only comes in a pump spray--and is thus difficult to apply where I need it. I forgot to check the label of another brand I found recently, and bought it before I realized that it smelled like the cologne of a former colleague. The plant-oil based repellents don't work very well, and smell to high heaven of eucalyptus and other lingering odors.

But fall is filled with a kind of promise--not just of dark, frigid winter days, but of cozy fires, soup, bread-baking, and if I get my planting done, a better garden next spring. Now that I don't have my compressed academic calendar to regulate my days, I can pay closer attention to phenological information (such as the Monarch migration, which I'm not sure I've ever noticed before). And because I'm not teaching, I can enjoy the fact that the Cubs are in the playoffs without keeping MLB At Bat open on my phone during lectures. Last night's Full Hunter's Moon, and next month's Full Beaver Moon (November 14) promise celestial entertainment that even the glaring white light from the new house in back, or the so-called "soft lighting" in the trees next door will do much to diminish.

And even as I ponder the possibility of leaving for better weather, fewer trees, and fewer squirrels, the probability of permanent exile doesn't feel quite as oppressive as it once did. If the election doesn't bring on the apocalypse, a few well-planted trees along the back fence and a couple of trips to the desert might well obliterate the neighbor-instigated irritations, if not the squirrels.

This is the season of dancing squirrels, cool weather, declining mosquito populations, and Getting Things Done in the garden.

But the simple indulgence of enjoying all of the above has been overshadowed a bit by lingering remnants of my former life. So, having spent far too much time in diaristic grousing, I’m embarking on a new enterprise that involves taking more seriously my original intention of producing periodic essays on life, the universe, and nearly everything else. Now, in my idle dotage, I must rethink my website, Owldroppings, which was conceived back in 1997 as a student-focused site devoted to educational materials related to the classes I taught.

So, while the site fulfilled its purpose splendidly, especially in the absence of institutional web support (that came along nearly ten years later), that purpose no longer exists. I’ve left the pages mostly intact as I feel my way around rather blindly in a student-less world, but I’m now wondering whether or not to simply abandon it, or transform it into something new. Although I’ve thought of maintaining its focus on education, providing resources for progressive home schooling and/or lifelong learning, one alternative that seems the most sensible is to simply rename it “Owl’s Farm” and move this blog to that site and proceed from there.

I’m especially reluctant to abandon the domain name (owlfarmer dot com) because it was suggested by my dear, sweet, goofy, late father. A German acquaintance once pointed out to him that “Uhlmeyer,” when pronounced properly as “OO-leh-my-er,” sounded awfully like the equivalent of “owl farmer” in German. I’m not sure how this could be, since “owl” in German (“eule”) is pronounced more like “Oil-uh.” But apparently in some dialects it can be pronounced “oo-leh,” and my dad thought the idea of owlfarmers was hilarious. Soon afterwards, I was in need of a domain name when I decided to build the website, and he suggested “Owlfarmer”—and so it went. He had also discovered that “Uhlmeyer” freaks out the dictionary in Word, and when you ask it for alternative suggestions it comes up with “Whatever.” Had I tried that one, I might have beat John Scalzi to it—but only by a little.

One thing, of course, led to another, and after I started blogging in 2007, Owl's Farm begat Owl's Cabinet of Wonders.  When some of my educational musings seemed a little out of tune with the Farm, I added The Owl of Athena (which later dissolved back into the Farm).  And just before students started getting tired of blogging in general (and my blogs in particular), I convened The Owls' Parliament, the shortest-lived of them all. And of course I have been given all manner of owly things from carvings made from Mt. St. Helens ash to innumerable mugs, by friends and students who think I have a "thing" about owls. I don't, but there you go; I did it to myself. And I do appreciate the thought behind the gifts.

At any rate, the owlfarmer domain thus needs to stay, and since I really don’t remember how we came up with “Owldroppings” as the page name (it was better than Owl Barf, which was another suggestion--I’m pretty sure the choice involved alcohol), that’s completely expendable. One of the early hosts of the page, Matthew LaVelle, designed a cute Flash program that featured line drawings of various stylistic interpretations of owls, dropping randomly from the top of the page and piling up on the bottom. That would have made some sense of it, at least, but I lost the file. And Matt’s gone off to Oregon to grow wine and raise a family, so I don’t imagine he even remembers it.

So here’s the plan: improve my web design chops by updating my Dreamweaver skills, talk to my server about how to convert it to a blog, and archive the best of the educational stuff so it’s still available to stray students who wander by wanting to use something they remember.

If anyone who still reads this has any suggestions, please let me know. I don’t really need any technical help, because as many who have tried to help me with redesign in the past know, I’m ferociously selfish and egocentric and determined to effing do it myself, damnit. But I would welcome directional advice.

In the meantime, I’ll write next about dancing squirrels and Autumn in Texas. And maybe baseball.
Posted by Owlfarmer at 8:55 AM 1 comment: