Gaming For A Purpose

The latest Endangered Alphabets Kickstarter campaign launched on November 12, and was funded at its initial level (USD 20,000) on November 22. This is a record for us (I say "us" because I'm proud to have been involved with Tim Brookes's several projects almost since their beginning) and has prompted a "stretch goal" of USD 30,000 to be raised in the next twelve days.

For a complete description, see the page "ULUS: A Game to Save a Culture" on Kickstarter, watch Tim's video, and do please pledge if you can. And if you're interested in the history of the Endangered Alphabets projects, see these posts here on the Farm: The Thank You All Exhibition; The Atlas of Endangered Alphabets; 100 Words for a Children's Endangered-Language Dictionary;  The Right to Read, The Right to Write. 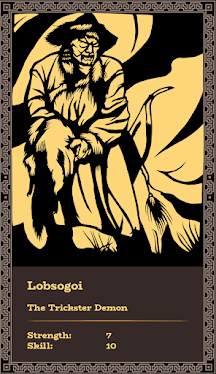 I'm particularly excited about ULUS: Legends of the Nomads, a game designed to help promote the survival of the Mongolian language,  script,  and culture--not only because I am the proud mother of a professional game designer (both table top and digital), but because games are so useful in helping people understand other people. This is not true, of course, of all games, which is why I continue to have conversations about the nature and content of modern, especially video, gaming with MSGG (my son the game guy)--as I have with former students during my days teaching game designers in my former life. One of the first posts on the Farm, back in 2007 (Virtual Unreality) contained a critique and a discussion with a gamer of a game called Bioshock, which seemed horrific to me at the time--but after the conversation I came around. A little.

At any rate, my affection for tabletop games is problematic, since I don't play them very often. I love the idea of them, but I'm such a terrible loser that nobody will play with me. Nevertheless, I've backed half a dozen Kickstarter campaigns for games that I took to my humanities classes for a quarterly game day to show students how learning about art and culture made really cool games possible. The students always enjoyed the wide variety of games based on Egyptians or the Maya or archaeology or even art historical topics and games adapted from ancient versions. Early art work and design images for ULUS promise to blow most of these out of the water in terms of graphics alone. I'm actually looking forward to engaging The Beloved Spouse in a few rounds of ULUS, because I suspect that I might actually enjoy playing something this thoughtfully produced.

I can't help but think that ULUS would have provided a much-needed look into stories and images based not on The Usual Suspects, and it will certainly provide an initial point of contact for most of us in the West with Mongolian history, folklore, and language through which a further, deeper understanding can be begin. For a description of the importance of this project to Mongolian cultural survival, see "Why Is Mongolian Script and Calligraphy so Important to the Mongolian Identity?"

Tim Brookes's creative energy and devotion to the very important causes he has supported offers me some real hope that a better, more inclusive, and more historically conscious future is possible.

Image credits: both of these examples of the artwork for ULUS came from Tim Brookes. Sorghagtani Beki was known as "The directing spirit of the House of Tolui" for helping to establish the Mongol line under her son.

Posted by Owlfarmer at 1:38 PM No comments: