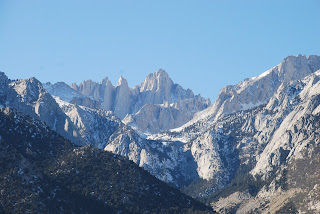 Image note: The photo is of Mount Whitney, taken in the Alabama Hills outside of Lone Pine, California, during our winter trip in 2015/16. Whenever I stayed with my Grandmother, I could see a more distant version of this image from her living room window.
Posted by Owlfarmer at 11:12 AM No comments: