Although it's a relatively fine day (good sun, but chilly in the shade), I'm indoors, having just moved from the fire-warmed living room where I'd been reading all morning. Part of that reading consisted of my new avocation: pornography of the architectural variety.  I'm down to teaching one day a week (a long one, with two classes back-to-back), so I tend to while away my day less frugally than I once did.

I have borrowed as subject and description for this post the title of a lecture that William Morris delivered at Kelmscott House before the Socialist Democratic Federation (Hammersmith branch) on 30 November 1864 (it appeared in Commonweal in 1887). This is not to be confused with his unpublished lecture, "How Shall We Live Then," (1889) although, as always, the sentiments overlap. But I'm absconding with the title for my own purpose, which is to describe the dilemma the Beloved Spouse and I face as we meander toward real retirement and the realities of living a life of reduced means and (thankfully noted) less tsuris. We have led short professional lives by most standards, having only begun to teach full-time in our thirties (him) and forties (me).

But as teaching has become less rewarding and more angst-enducing, the idea of leaving the profession has become inescapably appealing. I would like to point out, to any of my students who might chance upon this blog, that this is not their fault. They are the products, through no failing of their own, of a damaged education system that has reduced them to test-taking automatons and has denied them the most fulfilling aspects of learning how to learn. This is, in turn, the result of an economic system that privileges monetary success above the life of the mind and makes being an educator one of the most frustrating jobs one can hold.

And, as I have noted repeatedly in my more recent posts, living in Texas has become more of a trial than we had ever imagined it would be.

Thus, my essay into living and being is only flimsily connected to Morris's, although my reasons for writing are firmly rooted in his social philosophy: especially in his idea of work. I should also note that in our case "reduced means" doesn't truly mean that we will be poor, in the sense against which Morris raged, and in which many of our fellow retirees find themselves after they either lose their livelihoods (having been made redundant, often because they've grown "too old" for their jobs) or leave on their own despite diminished 401Ks.  Even teachers, who used to be able to count on decent pensions, have been encouraged to choose market-based accounts, gambling on the possibility that the stock market might yield higher returns than the standard, guaranteed annuities of the past. Fortunately for us, my Beloved Spouse chose the latter (unlike many of his cohort) and his pension will allow him to retire early enough to enjoy some time with me. And although I have a small retirement account, I've seen it diminish considerably during the recent market downturn, so we've never counted on it much in our future plans; instead we will make do with his annuity and my Social Security check.

Those plans are, in fact, the real subject of this post.  And the question is not simply about how we live now and how we might have to adjust things for the future; it's also about where we might live, because place is such an important aspect of our concept of the good life.

Thus, I spend inordinate amounts of time surfing the interwebs for affordable locations that might be less philosophically difficult retirement venues, or at least so beautiful that we could deal with dodgy politics a bit more affably than we can here. Using online real-estate sites, I peer voyeuristically into peoples' homes, ever critical of their taste, but always eyeing their rooms for possibilities. The basic criteria involve big sky, deserts or prairies, mountains or oceans, lack of proximity to major thoroughfares, a hospital with available cardiac care (I'm "fixed" but need occasional maintenance), a smallish town, and reachable by children who may be enticed to visit a really great place.

As I mentioned in the last post, western Montana was high on the list, but a recent article in Sunset on the best places to live in the west mentioned Bisbee, Arizona, and Lander, Wyoming--both of which (upon investigation) have much to offer.  So they join the Owens Valley as possibilities, as do some of the university towns in Oregon and Washington (as long as they have enough sunny days per year to stave off my self-diagnosed Seasonal Affective Disorder).

What I didn't mention last time was what kind of house would work.  The House (which has so far avoided being named) we live in would be a hard act to follow. As problematic as it's been, especially in terms of the amount of work it takes to maintain a 93 year-old antique house, we love this place. And the problem with thinking about leaving it is that any new work or adjustments carry with them the subconscious, if not overt, question of how change would affect the sales value. 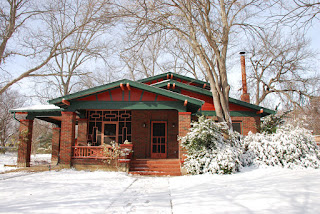 Two winters ago, before the mulberry in front was cut down.

Because we live in a relatively desirable area, and if the requests to buy the house (a couple a year) we get in the mail are any indication, we can probably sell it fairly easily. But getting a decent price--one that helps mitigate the 150K we've put into it on top of the mortgage--will depend on the market, and the passion of the prospective buyer.  We knew that this was The House almost as soon as we walked in the front door, despite the gold shag carpet and the doll collection. And the white aluminum siding that hid all the great exterior details. And the Astroturf on the front porch.  I can only imagine what visitors might ask about what we've done: Why isn't there any air conditioning? Why haven't they refinished all the floors? Why did they remove the sheetrock and leave bare shiplap? Why haven't they modernized the kitchen?  Why do they have so many books? Etc.

What I look for in a substitute: Either a log cabin with good wall space or a craftsman-style that hasn't been "modernized." (That means no new cabinets, no granite, no stainless steel, no new fixtures, etc.) Preferably no carpet, but at least wood floors under existing stuff (that hasn't been stuck down). If in town, walking distance to necessities, big enough yard for a garden. If out on land, space and view, possibility of off-grid with not too much investment. Not in a forest, but some trees on property OK. If major work needs to be done, the price has to be low enough that we could afford to do it, even if that means living in the Shasta while work gets done. Ah, and space for the Shasta in the back yard.

In a future post I'm going to sort out the "before" and "after" shots of the last major upgrade (a year ago last summer). Some of the changes were so heart-pleasing for us that they would be hard to leave. But sometimes circumstances just occur that make leaving necessary--as they did for William Morris, who had to give up Red House because it was too far from London, where the work was.  Instead, he found Kelmscott Manor, which inspired some of News From Nowhere. 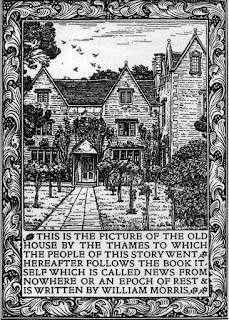 Frontispiece to News From Nowhere 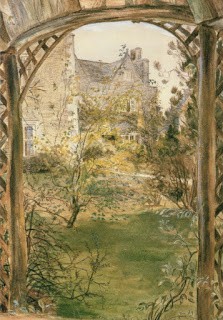 The ruminating and searching and discussing will continue for at least another year, by which time we will be getting close enough to a retirement date for the Beloved Spouse to get serious. And the process will probably continue after that, because we'll have time to take the Shasta out to visit prospective venues. During that time we'll probably keep messing with the place, making it more and more of our own, and then having to decide, in the end, if we're really willing to give it up.

Image credits: all images except the one of The House are from Wikimedia Commons.
Posted by Owlfarmer at 2:19 PM No comments: