Desdemona’s lovely speech in act 1 of Othello, in which she describes how she fell for the guy in the first place, recounts the enormous power of storytelling. Great stories make us love people, and help us love ourselves. My version of the passage is stolen from the title of Yi-Fu Tuan’s book on aesthetics, nature, and culture (for which he paraphrases Desdemona's lines) and he’s a bard of a different kind: one of the best philosophers still alive. But I use it for a different reason: to mark the deaths of two remarkable storytellers, each of whom has profoundly affected my reading life, and (in many ways) the way I think about the world. The trouble with getting old oneself, of course, is that those older than you are, who have inspired or otherwise nurtured you, start dying off and reminding you over and over again of your own mortality. Still, one would hardly want to have done without them—one’s own personal heroes, inspirations, role models. 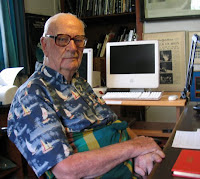 The first of these is Arthur C. Clarke, almost every book of whose I’ve read one or more times in my life. He epitomized the scientist-science fiction writers I admire most—those who can use what they know about how the universe works to posit truths about those who populate it. Although he lived to be ninety years old and wrote more than most people could in several lifetimes, I will miss him sorely. My memorial offering: two good obituaries (one from the New York Times, and one from Space.com) and Clarke himself via YouTube, from an interview last December.

The second is Robert Fagles, emeritus professor of Classics at Princeton, translator

extraordinaire, channeler of Homer and (more recently) Virgil, and someone who could read Greek iambic hexameter aloud with the voice of an angel. His versions of the Iliad, the Odyssey, and the Aeneid should be on the required lists of all English-speaking schools in the world. Through them children would learn about honor, loyalty, and the frailties of humankind, and about both the glory and the folly of conflict. Having worked on my own translation of the Odyssey (in order to keep up my Greek chops) for the last twenty five years, I can attest to the difficulty of rendering Homer’s transcendent language into equivalently powerful English, but Fagles did it with both of Homer’s works. He translated plays by Sophocles and Aeschylus into resonant commentaries on the nature of tragedy. And then he blessed us, only two years ago, with the best translation of the Aeneid I’ve ever read (and I’ve read many). The last time my husband and I drove from Texas to California, we listened to Fagles's translation of the Odyssey, read by Ian McKellan, and it transformed the landscape of the trip. Robert Fagles died last week at only 74. Here’s a nice obit in the New York Times, and a wonderful audio recording of a talk on Homer at Princeton.

Both of these men helped color my view of utopia: Clarke with his apparently irrepressible belief in the positive outcome of human exploration, especially into space, and Fagels with his eloquent translation of Homer's Odyssey, and particularly the story of the Phaeacians. My heartfelt thanks to them both, for their many and enduring gifts.