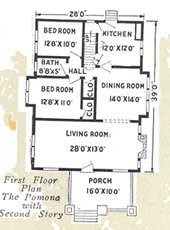 I suppose that there's something to be said for buying a brand-spanking new house, with everything pristine, fresh, and never messed with by anyone else. The attraction is actually somewhat more appealing now that I'm in the middle of rehabbing two rooms in our 85 year-old prairie/craftsman bungalow hybrid (with a floor plan similar to the Aladdin kit home pictured at left and linked here; our porch wraps around to the left of the living room, and there's a former butler's pantry/now breakfast room between the kitchen and the dining room), and trying to undo the bad previous rehab jobs carried out (I suspect) by the previous owner. He and his wife had lived in the house for twenty years before he died and she decided to give up a great house for a spit-and-sawdust piece of architectural crap on the other side of town.

Mind you, the first house I owned was a new one, in a low-cost suburban development, primarily because it was all we could afford. That, apparently, is one reason first-time buyers don't choose old houses--the financing is easier to come by if you buy from a development, and it usually requires a much lower down payment.

When Beloved Spouse and I finally landed full-time teaching gigs and could afford to buy a house, we really wanted to stay in East Dallas, where we moved after my daughter graduated from high school. We had spent two years in Chicago and moving back to the suburbs was difficult, so we got out as soon as we could. After five years of living in a real neighborhood, within walking distance of good restaurants, pubs, and interesting places to shop, we were ready to settle down into a little prairie bungalow in the same area. But two things happened to thwart our plans: other people had discovered the area, making it more desirable than it had been when we moved there, and causing prices to start drifting up. On top of that, many of those who had just discovered the neighborhood didn't like the little houses, so they began to buy and tear down--completely destroying the character of the place. Enter the McMansion speculators, and the resulting end of our plans to stay in Dallas.

Few places exist these days that are actually safe from this phenomenon. Some areas of Dallas have since acquired historical preservation status, but the prices in these neighborhoods are beyond our reach. We began to look at northern suburbs that would lessen my husband's commute, and ended up here in McKinney, which has a well-established historic district and still (eight years ago) affordable houses with some character. Morris's Craftsman aesthetic had ruined me for today's housing styles, and we really wanted something more substantial and more closely geared to our own "antique" lives. It takes me longer to get to work, but I've got a schedule that only requires my presence on campus three days a week, so it's not as bad as it seems. And, we don't have to watch the cheesy little house across the street torn down and be replaced by something totally inappropriate to the lot and/or the neighborhood. The rule around here is that if a house is sound, it has to be restored within city guidelines. If it's not, it has to be replaced with a house in an appropriate vernacular style represented in the city's history.

The main problem with our preservation efforts has always been money. The house was so incredibly attractive to us when we bought it that we overlooked its many flaws, and firmly believed that we could fix everything ourselves. Chief among these problems--at least the ones that didn't have to be taken care of by professionals immediately, like wiring and a heating system--are the floors. In three rooms they are potentially gorgeous quarter-sawn oak. In two others, they're red pine. I hand-stripped the floors in the living and dining rooms, after we had removed the gold shag carpet installed in the '70s and discovered that between us and the great floors lay carpet padding embedded in the original lacquer. That's as far as we got before we had to throw down some rugs and live with what we'd been able to do, because we ran out of time.

Nobody who visits seems to notice how cruddy the floors are because the house itself is so charming. It's very comfortable, and the walls are lined with books everywhere one walks, so the floors don't get noticed. But we notice them, and are finally getting around to doing something about the study and the sunroom (where we watch television, and where the dogs sleep). We're actually switching the purposes of the two rooms, so that I can work while looking out on the garden, and so the now-study can be turned into a guest room in anticipation of my daughter's graduation from college (finally!) this coming winter, when we'll be having family to stay. 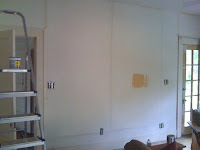 This new effort has required emptying the dog-room/sunroom of books and most of the furniture, so the really bad seventies-era wallboard job can be repaired (what were they thinking?) and the walls painted, crown molding (which was removed for some unknown reason) can be replaced, and floors stripped and sealed or otherwise protected. Then the new Ikea bookcases can be installed, the desks moved, the books returned--and we can start on the "new" guest room.

What chaps me more than anything, and what has made me somewhat more sympathetic to new-home ownership, is the fact that the "repairs" attempted on this house thirty years ago were accomplished so badly. The guy may have survived the Battle of Iwo Jima (according to his wife), but he didn't know bollocks about remodeling a home. So I've spent the past three days patching great gaps between drywall segments, just to prepare to paint. Today that part will be done, and we go to rent a sander, because I've tried fifteen different ways to get the padding-encrusted varnish off the floors (which we've had covered up by large area rugs for the past few years). Nothing works that doesn't cause me several days' worth of lower-back recovery time.

As if by magic, this month's issue of Old House Journal arrived yesterday, and features a post-fire renovation. There are floors in this house that are as close to natural as it gets--with only an environmentally safe oil sealant to protect them. This is exactly what I've been looking for: permission to leave this potentially lovely wood looking as bare as possible. Clearly, I spent much too much time amongst the nuns in my youth to need "permission"--but it was a kind of moral confirmation. I'd probably have done it anyway, but just seeing a good house in a national magazine with floors that haven't been layered with polyurethane (the way they seem to require it done on This Old House) was enough to bolster my confidence.

The plan for the next two days is to finish the floors, paint the walls (the color is The Freshaire Choice's no VOC "Natural Ginger Root"), and install the molding. At the weekend the move will take place, and the now-study will be emptied so we can start in on it. The room itself is much smaller, the molding intact, and the quarter-sawn oak floors in better shape, so it shouldn't take as long. Which is good, since I've only got a week and a half left before I've got to get back to renovating my courses for next quarter in time for classes to begin on Bastille Day.

More on this later. But I did want to let folks know that I haven't turned into a slacker while on holiday.
Posted by Owlfarmer at 9:56 AM

I just thought I would throw this in. Rug Pads can cause more harm that people expect. While all rugs need a pad the small ones can get away with that rubbery waffle non skid rug padding but it should be picked up and cleaned under every once in a while because that type of padding breaks down. In that you can’t (or probably won’t) move and clean under a big rug (which usually has furniture on it) that waffle padding should be avoided and a felt and rubber rug pad should be used. The rubber on these pads shouldn’t breakdown and wrecks the flooring underneath. That way no one else will have to go through what you are going through with your floors. Good luck with the renovation.