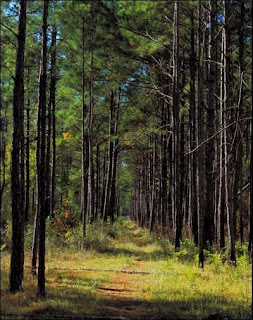 One of the consequences of getting old includes--as I've undoubtedly mentioned before--perusing the daily obituaries page in the local rag. Occasionally I run into a familiar name, as happened last Saturday, when the Dallas Morning News ran a long obit on Edward C. Fritz (better known as Ned), a 92 year-old conservationist who had once contributed mightily to my effort to learn to love the prairie. This morning the paper included an editorial comment on Fritz's legacy.

I only met Ned once, when he spoke at a gathering I attended, and where he signed my copy of his book, The Sterile Forest, about the brutality and stupidity of clear-cutting (Austin: Eakin Press, 1983; it seems no longer to be available). Through his writings and other activities, he was a major contributor to my understanding of the region. Aside from this small personal connection, however, his impact on conservation and environmental understanding in Texas is profoundly significant, and his death at a grand old age offers a moment to take pause and recollect.

In 1964, Ned Fritz served as the first president of the Nature Conservancy of Texas board of trustees . In 1966 he founded the Texas Committee on Natural Resources, and was a primary organizer of the Big Thicket Coordinating Committee, which convinced Congress to establish the Big Thicket National Preserve. In 1970, he helped found the Texas League of Conservation Voters. And the list goes on . . . and on. He was a tough, feisty lawyer willing to take on just about anybody, including his neighbors:

In Dallas, along the Trinity River, Ned Fritz and his wife Genie live in a defiantly modest house in an opulent neighborhood. While their neighbors' idea of landscaping runs to high gloss, the Fritz's three acres of bottomland feature a riot of hardwood vegetation thriving under 40 years of selection management directed by one of the toughest tree huggers around. Cedar elm dominates, along with Shumard red oak, chinkapin, Osage-orange, and the Texas state champion green hawthorne. Unimpressed, Fritz's wealthy neighbors took him to court over his approach to urban landscaping.

They should have known better. Fritz won hands down. (Quoted from Tom Wolf's 1991 article in American Forests, "Fritz vs. the Feds")

Fritz had mentioned his landscaping preferences in his talk, which subsequently inspired my "East Plano Suburban Prairie Ecology Project" to the chagrin of my own neighbors. I let my already questionable lawn go wild, and it immediately sprouted a meadow of Texas dandelions, blue-eyed grass, flax, Venus's Looking Glass and myriad other wild flowers. One day, while I was away, a neighbor rode his lawn mower over to my house and got rid of it for me, thinking he was doing me a favor. That's probably one reason for my habit of gardening as accidentally as possible now that I own a half-acre of vegetal near-anarchy.

I can add little to the accolades already available all over the web (the best obit I found was at the Austin American Statesman, and there are plenty more), but few local folk have had more influence on my own views than this one man, and I thought it important to thank him in public.

In his honor, here are a few web pages related one way or another to conservation efforts in Texas that aren't already linked above:

Image credit: I pinched the Big Thicket image from Cooperative Conservation America, which I hope will forgive me in exchange for the plug.
Posted by Owlfarmer at 9:46 AM