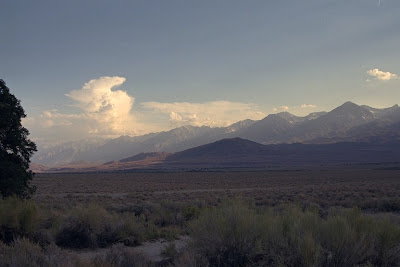 Seasonal Affective Disorder grips me from time to time, usually after a long, dreary, cold week in January. But climate change has produced some interesting effects in north Texas, not the least of which is the succession of rainy weeks that has filled the reservoirs but severly dampened (ahem) my spirits.

I get predictably homesick in the fall anyway, because the change of seasons in the desert usually happens quite suddenly. The Owens Valley would change colors from the green/brown/beige of summer overhung with clear blue skies to the gold, red, orange, yellow, and beige of autumn (and the arrival of clouds along the ridge line of the mountains) in a matter of a few hours. The temperature typically drops from 90s to 70s in the daytime, and the nights get cooler as well.

In north Texas, where I've spent most of the last thirty years, the change is less obvious--except that this year the transition from summer (hot, sultry, muggy, and bug-filled) to fall (usually less hot, less muggy, with fewer bugs) has been just plain wet. I think we've only seen three or four sunny days since the equinox, and have measured over six inches of rain. It's not that I don't appreciate the rain, since it promises a longer, greener, cooler spring. But for a desert rat, there's such a thing as too much water, especially all at one time.

I can be excused, I think, for succumbing to nostalgia--especially since I haven't spent much time in the desert since 1999, when my husband and I visited my folks on the western side of the Sierras, and then traveled over the mountains, through the sequoias, and down into the valley in which I was born. We then traveled out again over the Inyos to Death Valley on our way back to Texas. The photos for this post were taken then. At least I can enjoy the sun and the clear desert air in memory, until things get a bit crisper and more autumnal around here and I can start to appreciate what the prairie has to offer.

The opening shot was taken from Uhlmeyer Spring (named after the great uncle who prepared his ore there after prospecting) looking toward Big Pine and the Sierras near sunset.

We then traveled out over Death Valley Road, and arrived at the north end of the monument at Eureka Valley, near Ubehebe Crater, and took some photos while overlooking some pretty amazing geology and a nicely contrasting skyline. 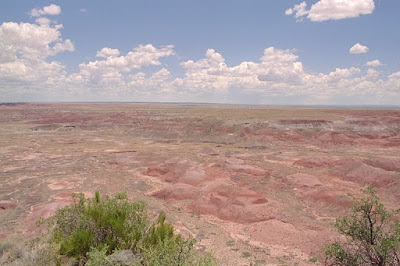 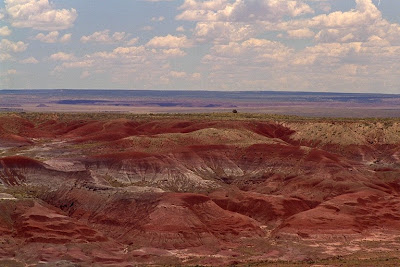 On our way back through Pueblo country (Petrified Forest) we stopped to see some relict walls and rock drawings (peckings, really). I remember hearing a child ask his mother why the bird was carrying a baby--but I'm pretty sure it's a frog. 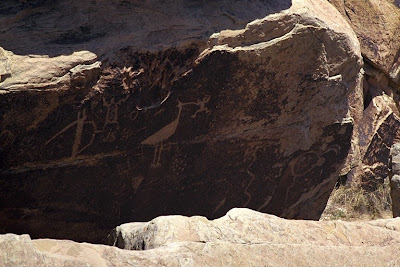 At the very beginning of this year (during one of those dreary weeks in January) I posted on "Desert Love" in response to a wonderful film a Brazilian friend recommended to me. This time my nostalgic musings took me back to my own desert, and I'm glad I remembered the trip.

Before I had a chance to post this, the sun finally came out, and by the time I got home the temperature had dropped (it was warm enough this morning when I left, in the dark, at 6:30 am to cause a heavy fog), so that I was considerably cheered by a sunny, fall evening. I have been promised sun tomorrow by the local weather wonks, but rain may return at the weekend. Hope everyone else has a happy Skywatch Friday.
Posted by Owlfarmer at 4:58 PM

Marvelous desert captures! The first one is fantastic! We've moved into our rainy season here in Seattle, so I won't be seeing a lot of sun for a while!

Have a great weekend! Stay dry!

This Is My Blog - fishing guy said...

OF: Neat captures of the skies to share with SWF.

I haven't had the opportunity to spend much time in desert areas so I especially enjoy the photos and commentary. All we have been getting in Ohio lately is rain.

Wow, cool clouds, love the mountains in the pic too

Beautiful shots. I like the view of the cinder cone you get from the spring, I usually see it from 395. Well I remember the clouds hanging over the crest, not coming to the valley to give us rain.
This week, for watery Wednesday, I have photos of water in the lower Owen's river taken near the old Lone Pine depot. They have put in just enough water to green up the old river bed and keep a slow river flowing.

Folks interested in the desert/water situation in the Owens Valley should go read Martha's post on her blog. The river has never actually been dry (I used a picture of it on last year's Earth Day entry, "Surviving Plutopia"--April 22, 2008), but is certainly flowing more quickly and deeply than at any time since the '30s. Martha's pictures of the river and its context are lovely.