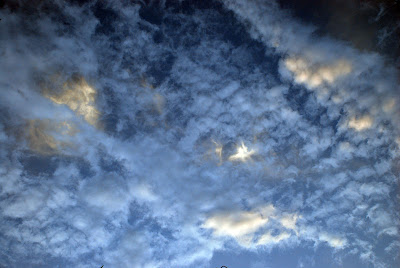 The summer cobwebs and hobgoblins have entered my brain full-tilt as we enter our second week of 100 degree days. The temperature has been hovering around 105, and in north Texas, this is hot, because the heat index brings it up to about 112. The garden is wilting, and drought restrictions mean that I can't legally water it with a sprinkler except on Fridays and Mondays before 10 am and after 6 pm, although I have done a couple of times because I can't stay out more than five minutes without becoming a mozzie-banquet. All I seem to be able to do is remember what it was like in the summer of 1980, when I was driving a one year-old and a four year-old around in an old VW bus with no air conditioning. For a solid month the thermometer dipped under 100 only after sunset.

The then four-year old is now living in Seattle, where it looks like the high today might get into the '80s. Sheesh.

So I'm obsessing, it seems, about clouds--which promise quite a lot, but deliver little. The next chance of rain is tomorrow night, although the local forecasters' track record on predicting rain is abysmal. But since it's too rutting hot to go out, and I can't stand the stench of even "unscented" mosquito repellent anyway, I went back to the archives for cloud pictures, and came up with these from last summer. Most were taken in the vicinity of the Ballpark in Arlington, and one or two may have been posted previously in conjunction with baseball musings.

Since I have to take these into Photoshop to optimize them for publication (the original files are huge), I decided to run them through "auto adjust" to see what would happen. I wouldn't normally do this, but the program cost a few quid and thought I'd see what it would do to my shots.

For the most part, they're a bit brighter than the originals, but nothing really dramatic happened. I thought they were all pretty, though, and worth sharing--even in retrospect. I'm too fuzzy-headed to rant about anything, so y'all can just enjoy the pictures (as I will yours) on this hot, hot, hot midsummer Skywatch Friday. 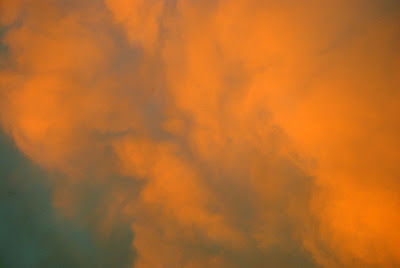 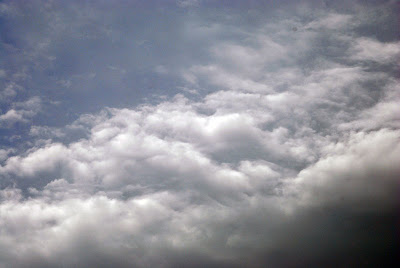 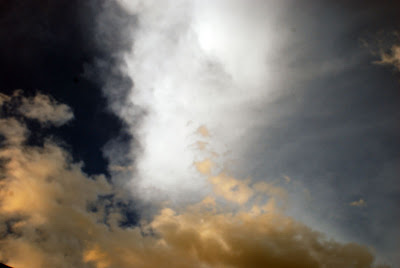 Have a good weekend, wherever you are. I'm rather envying the skywatchers from below the equator today!
Posted by Owlfarmer at 10:10 AM

I do hope the weather breaks soon for you. I can only imagine the oppressive heat - anything above 75has me complaining and wilting.
It's interesting to see how photos can be 'adjusted'. I like clouds, whatever the colour. Have a good weekend - and keep starving the mosquitoes!

Your sky photos are cool, even if your weather is not! Love that last photo. Good luck with rain and cooler weather. We've had clouds and storms here for the last few days, so maybe it'll move your way.

Terrific photos! I do empathize with you where the heat is concerned -- I grew up in Texas and my oldest son lives there now. I'll stick our wonderful weather here in Seattle -- we get tired of the gray skies and rain from time to time, but it's nearly always comfortable temperature wise! Hope you get a break in the weather and have a great weekend!

You are a great thinker to figure out how to post skywatch Friday cloud shots differently. Nice job.
Joyce M

H0pe we can share the rain t0gether,then we can have a happy w0rld...y0ur skies are great!

Most awesome cloud shots this week. Thanks for sharing, and for stopping by.

Excellent cloudscapes! Like art! I hope things cool down asap. Nice cool temps here in the PNW...thanks for visiting my SWF.

What a great set of images you got yourself their. Keep that theme up and you will have a wonderful collection of images.

I am fascinated by the first photo! The shapes of the clouds, and the light coming through!

the photo's are gorgeous. When thinking about Texas, and the heat it makes me miss home so much, Im From California and only recently moved here in April, maybe i should have held out until sept. to relocate to the South. I am actually thankful for the rain, and the clouds that we've been having this week,the temps actually put me in a west coast feel (minus the sun). I have never ran AC or dredded going outside so much in my life. Im actually thankful for the clouds. :-)