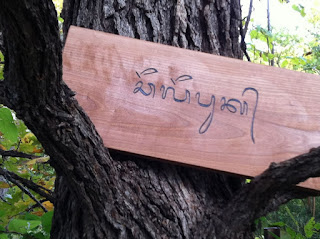 Once again, the confluence of coincidences has evoked a post; this time it all involves a new Kickstarter effort (The Mother Tongues Campaign) on behalf of Tim Brookes's Endangered Alphabets, New Scientist's cover story this week on "The Eloquent Ape" and related commentary, and the growing chagrin experienced by my Beloved Spouse, my colleagues, and myself about the demise of language skills among college students.

I've written about the Endangered Alphabets Project a couple of times before (Losing Languages in 2011 and Endangered Languages Revisited in 2013--partly about BASAbali), and so will try not to repeat myself this time. But if you've got the wherewithal to support a worthwhile project, please visit the links above, or see the Kickstarter page (the small campaign has been funded, but more donations will result in its enrichment).

What makes this kind of project all the more meaningful is watching less endangered languages (English and the major European languages, for example) suffer from the onslaught of technologies based on reflexive, instantaneous responses that require neither linguistic acumen nor simple thoughtfulness.  I've frequently railed against the twitter-machine (although not by name) and gave up a gig as a community voices volunteer for the Daily Poop because they wanted me to feed them occasional one-paragraph comments on things that really need more than soundbites.  And while I much prefer text-messaging to telephone calls because texting allows me the possibility of passing ideas through my brain-filters before they exit my mouth, I rue the effects of texting on the general public. This doesn't make me a Luddite computer-hater, however. I'm a great lover of e-mail because it allows me to respond to messages and engage in long discussions over time about important topics.  I've made more than a few on-line friends through the blogs and through MOOC fora, and these have led to rich and enjoyable conversations that I probably would not have been able to participate in if handwritten letters were still required.

Nevertheless, the Beloved Spouse and I spend part of each morning's newspaper-reading session grousing about the demise of vocabulary and the inappropriate use of prepositions. Our students constantly seek to "base off of" rather than "base on," or to "center around" rather than "center on." And while these might seem insignificant (after all, language changes), they indicate a growing lack of precision and subtlety in common parlance. What might it mean to base an essay "off of" a poem? How does a question "center around" a particular event?  As George Lakoff and Mark Johnson once noted (in Metaphors We Live By), prepositions often indicate orientational metaphors (waking up) that have to do with spatial relationships. So what could it possibly mean to center around something, or base something off of something else?

Of course, some prepositions are variable enough that regional differences arise (New Yorkers stand on line, while Californians stand in line; Brits use "difference to" where we say "different from"),  and arguments can be made that the implied orientations in these cases make some sense. But if we lose appropriate prepositions, or rich, varied vocabularies, how can we retain any level of literary or other communicative sophistication?

Another observation, somewhat related to the loss of vocabulary, is the loss of second language acquisition in the US. A not-so-recent, but still useful article from Forbes (August 2012) explores "America's Foreign Language Deficit." The upshot is that our kids are missing out on learning other languages and this isn't without consequences:


We should care – a lot – about our foreign language deficit.  We need diplomats, intelligence and foreign policy experts, politicians, military leaders, business leaders, scientists, physicians, entrepreneurs, managers, technicians, historians, artists, and writers who are proficient in languages other than English.  And we need them to read and speak less commonly taught languages (for which funding has recently been cut by the federal government) that are essential to our strategic and economic interests, such as Farsi, Bengali, Vietnamese, Burmese and Indonesian.

My periodic queries in my classes about who speaks a language other than English reveal a few Spanish-speakers whose parents came from Mexico or Central America, or an occasional Vietnamese, Chinese, or South Asian child of immigrant parents. A few Anglo kids have taken French or German in high school, and over the years I've found that some animation students or martial arts devotees have studied some Japanese. But hardly anyone who is not him- or herself an immigrant can speak anything but English fluently.

In the end, what this means for real fluency in English is that too many speakers lack the depth of training necessary to really understand how language works. They develop only a superficial notion of how nouns and verbs work together, or how prepositions indicate the underlying cases of nouns. Adverbs dangle all over the place, introducing sentences in which they are completely unrelated to any verb or adjective that follows. This may sound nit-picky, but "Hopefully, the aliens won't attack" suggests that the aliens won't attack hoping to kick our collective fannies; I'm pretty sure they would. This kind of subtlety is, unfortunately, lost on most of the writing students I've taught in recent years.

The linguistic pleasures experienced in this house stem from long association with other cultures or wide-ranging literary and philosophical interests.  My early encounter with Japanese makes watching Studio Ghibli films in Japanese enormously fun; familiarity with Classical and modern European languages has widened the range of literary treats available to us--not only because we can read some of them in the original tongues, but because we can understand allusions in the works of the far more adept English-speaking writers of the past.

It saddens me that so many of my students will never enjoy the richness of language, and they won't even know what they're missing. But I do wonder what will happen in a generation or two, when we old fanatics and nit-pickers are gone, and very few American college graduates really understand what they're reading. Even if the second language the 53% of Europeans are speaking according to the Forbes article (in contrast to the 18% of Americans speaking another language) is English, I wonder if in the end they'll actually speak it better than Americans do.

But as Tim Brookes, Alissa Stern, and others who work so tirelessly to foster the survival of truly endangered languages and writing systems have reminded us, some cultures are in imminent danger of losing their linguistic heritages altogether.  We can help them by contributing to their efforts; but we can also do so by reminding ourselves and others that language is a fundamentally human accomplishment. By ignoring its gifts, we diminish ourselves, and the potential impact on our future is problematic--and certainly not promising.

Image credit: Tim Brookes carved the above plaque, which spells out the word for "owl" in Balinese. It was my reward for backing the original Endangered Alphabets Kickstarter campaign. The plaque was photographed in the Burr Oak tree in my back yard, and illustrated the original post on the Farm.
Posted by Owlfarmer at 2:44 PM