Not long before the Plague descended and changed all of our lives, perhaps forever, The Beloved Spouse and I decided to take our travel trailer, Porco Rosso, out for a dry run--training for our planned trip west in early May. We trussed up Nylah and Molly in their harness and carrier, loaded up the bed of the truck with whatever gear we hadn't already stowed in the trailer, and headed south.

The original plan was to camp at Padre Island National Seashore, stopping at a state park about halfway there, and spending two or three days on the beach. We located a park that sounded interesting and was about the right distance away; we didn't want to travel for more than three or four hours because of the beasts. But when we chose the time slot, we discovered that the National Park Service would be doing a controlled burn at the seashore for part of the time we wanted to be there, so we decided just to stay for a few days at the "interim" location: Palmetto State Park near Gonzalez--in the Austin/San Antonio area.

We dutifully applied for season park passes, made reservations (getting the last available spot in the small RV campground), and planned for three nights.  It turned out to be a terrific choice, and we thoroughly enjoyed our time there. What's really wonderful about the Texas parks (as opposed to the national ones) is that we could take Nylah with us on trails, which she (of course) loved.  It was early enough in the year (the end of January) that our fellow campers were mostly geezers like us, or European tourists. Things were quiet at night, and we mostly had the trails to ourselves when we went out three or four times a day for long walks.

Porco is a "bunkhouse" trailer (20 ft.) with two sleeping areas designed for kids, but which serve as play/sleep areas for Molly, and under which her own personal loo is located. We cut a cat flap that leads into a storage area where her extra-large corner litter box could be housed and where she could get away from any commotion Nylah might cause. The plan was to begin her Adventure Cat training with her new harness and leash, but we could only get her onto the steps, so that was postponed. She spent the time enjoying the view from the two bunk windows, the window over the dinette, and the one by our bed. The bed is what the RV industry calls a "queen," but which is really more like a normal full, and is a bit of a squeeze for two adults and a Very Large Dog.

The weather was quite fine when we arrived at around three in the afternoon, and we took a walk as soon as we'd settled ourselves. The next day was somewhat misty and gloomy, which provided us with a more complex perspective than if it had been fair the whole time. Palmetto is almost primeval in many spots, with swamps and bogs, palmetto palms, and with Spanish moss hanging from trees in many of the microclimes. The San Marcos River winds through the park, and periodically floods the area, which is why it's a good idea not to go without checking long-term weather forecasts in advance. When we were walking along one trail, we noticed an eerie change in color on the trees at a uniform height, and then realized that it marked a fairly recent flood. 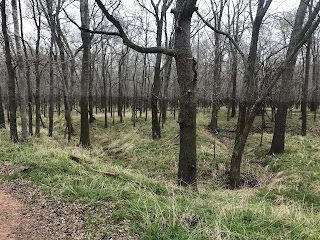 Although the flora and terrain in places suggest that dinosaurs wouldn't be inappropriate, the indigenous fauna include the usual suspects: armadillos, deer, raccoon, rabbits, and snakes. Attentive twitchers can feast their field glasses on some 240 species of birds. At one point we came upon a pair of prehistoric-looking vultures nesting in a tree next to a river path. We made it a point to take a dogless walk every evening so that we could see the deer meandering through the meadows and swampy areas without their being frightened away by our often overly enthusiastic pooch. 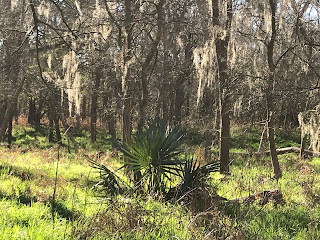 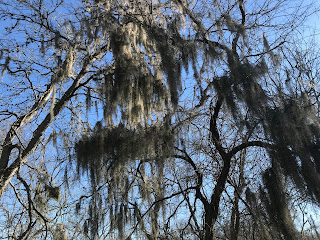 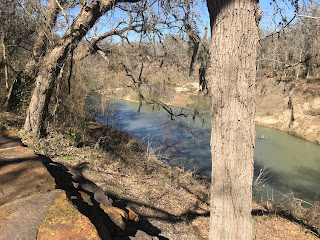 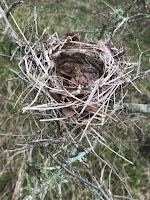 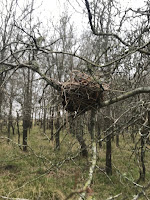 The trip provided us with an unexpected and refreshing look at a part of Texas we hadn't visited together, even though TBS had grown up in the region and I used to backpack nearby. As a result of this experience, we immediately started making plans to visit parks a little closer to home, even after our trek west.

And then the world changed.

Celebrating Earth Day this year is fraught with all of the political, economic, and cultural ramifications of a pandemic that few people seem to understand fully, and too many seem to be unable to accept as real and really problematic. We've only been hunkered down for about six weeks, the total number of infected people is largely unknown, the means to combat the virus itself are not imminent, and this country is flying blind into the future.

Oddly enough, the environment is faring better as we become sicker. Air pollution is down, water is cleaner in some areas, and fewer animals are dying on highways. Not coincidentally, fewer humans are being maimed and killed in automobile accidents. I'm hesitant to call this a "silver lining" because so very many people are suffering so badly. But as I think through the possibilities of long-term effects, I can't help but wonder how our modern, technological, "efficient," wasteful, cruel (to the animals whose "products" we consume, and all too often to other people), growth-obsessed, and greedy culture might change as a result of being locked down.

Might we learn to do with less stuff, eat more nutritious food from more local sources, live more kindly, drive less, find ways to live without fossil fuels, and take better care of ourselves, our children, and our neighbors?

I do not expect these questions to be answered easily or simply. But I do know that changes in our own lives, in this house, over the last three years, have made the impact of social distancing much less trying than it might have been. In the near future I'll be using this experience in my revision of More News From Nowhere, and will probably harness my owlfarmer.com website to explore some of the questions and possible answers, and collect the wisdom of others--past and present--as inspiration.

In the meantime, please wear your masks in public, go out only when necessary, live as lightly on the Earth as possible, and try to effect meaningful, long-term economic change by reflecting on the impact your actions will have on the future of your children. And please remember the health-care workers and first-responders who stand to suffer for the actions of people who really do think their haircut is more important than somebody else's life.

We would love to go back to Palmetto, but even though Texas governor Greg Abbott has reopened the parks (for day use, anyway), we won't. If one single person who maintains the trails, cleans the restrooms, or manages the headquarters contracts this virus and dies, it's our fault for not believing the science.

I wish I could wish everyone a happy Earth Day, but I'll settle for wishing you all a thoughtful one. May we all be in a better place in a year's time.

Addendum: On second thought, watch this, all the way through. If we truly are all in this together, we just need to change. Radically. Now.

Image notes: These were all taken with my antique iPhone 7.  Although there are few real "sky shots" included, do please link over to Skywatch Friday for photos from all around the Earth.

An then the world changed. So true. Let's hope it changes for the better in all the ways you mention. I'm not holding my breath, but I am at least a little hopeful.