Ways to Build Back Better

I've been so distracted by the sturm und drang of the current situation(s) here in the US that it didn't occur to me to check my gmail account to see if anyone had responded to my last post. I don't usually expect anyone to comment, but I'll try to do better in future. 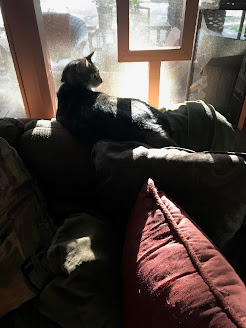 So, for the two folks who wondered about how the wren drama turned out, the news is good. In mid-July it was cool enough in the mornings for us to read the paper in the living room with the French doors to the screened-in porch at the side of the house open. When I heard one of the parent wrens chirping away, I looked out to see Molly perched on the back of the sofa on the other side of the screen from the nesting box. So for the next couple of days, we closed the porch off to avoid upsetting the family. [In the photo, the bird box is to Molly's right, on the other side of the screen.]

But then, a few days later, I just happened to see our local stray cat on the front porch, sneaking on her/his belly toward the nest, and immediately chased it off. In doing so, I most likely saved the baby's life, and while this was all playing out, Mom and Dad were very vocal and solicitous. I suspect that this was the last (or only) baby to get ready to fly, and by afternoon they were all gone. Parent-feeding was apparently still going on in the backyard area (the babies like to hang out on the garage roof and have food brought to them there), so the outcome seems to have been favorable overall. 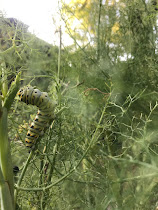 Which is especially good, since (once again) my Black Swallowtail butterfly hopes were dashed. I had only seen two caterpillars this year, and one disappeared just after I noticed it. We have a large fennel plant, which is apparently the preferred nursery for these critters, and I often notice various stages of butterflyhood playing out on it. I've written about them before (here, on the Cabinet, and also on the Farm), noting that those outcomes are seldom favorable. This was no different, despite the fact that this one caterpillar got big enough and fat enough that I thought it would survive. In the end, though the cardinals or the anoles won out and once again I'm bereft of reward for keeping that scraggly old fennel plant supported and watered through the long, long, hot summer.

Unfortunately, fortune failed us again while The Beloved Spouse was clearing 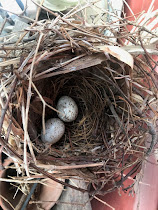 overhanging greenery in the alley behind our property. After he had pruned problematic branches and piled them in our yard, he set about cutting it all up for hauling to the tip. Which is when he discovered this little nest (sparrows?). Ants had already gotten to one of the eggs, but I put it aside to see if anyone would claim it. After awhile, though, it was clear that these would never hatch, and these parents would never get to teach these babies to fly.

Trying to foster wildlife in suburbia is very often a thankless job. Only a few of my neighbors abstain from chemicalizing their lawns, which accounts for the low firefly and butterfly population. And even though we keep a close eye on Molly and limit her backyard activities severely, there are several strays in the area, like the one I thwarted on my front porch.

I wrote some time ago about a writer I'd discovered at the New York Times, Margaret Renkl, the title of whose essay I brazenly paraphrased/plagiarized for my last post.  In a more recent piece, "The Death of a Cat," she eulogizes a feral cat for whom she harbored no love, but whose own predatory habits were caused by human neglect. She writes beautifully, and I urge you to read her stuff--if for no other reason than that she is far more successful at maintaining a suburban wildlife habitat than I am and is a much better model. I'm quite sure that many of the caterpillars whose mothers find their way to her yard actually survive.

And finally, this leads me to my actual topic for this post.

If we do manage, eighty some-odd days from now, to elect a real president (whose choice as a running mate I heartily applaud), who will establish a genuine administration staffed with appropriately credentialed people from a wide variety of backgrounds and experience, all of whom will help us rebuild this beleaguered nation, these are some of the ways I hope will be entertained in the discussion about how to accomplish the goals embodied in the somewhat stiffly-articulated campaign slogan, "Build Back Better."

Rethink national food production and distribution priorities. Early on in the lockdown, I connected with a local food hub: a distribution co-op of local farmers and other purveyors of home-grown products delivered directly to homes in our area. Not only do I now have a weekly source of humanely raised meat and dairy products, but I also have access to seasonal produce, fruit, and vegetables. I pay more for it, but am happy to do so because I have always maintained that family budgets should prioritize food in order to foster local farms that raise food sustainably. The national habit of looking for the cheapest food fosters inhumane animal production, industrial farming, habitat destruction, and the continued use of environmentally problematic pesticides and other chemicals. Farmers in the United States should be encouraged (with subsidies removed from industrial farms and redistributed to small-scale and family farms) to use regenerative grazing, permaculture, and other sustainable methods to ensure food diversity, availability, and adequate nutrition.

Make rebuilding habitats a national priority. Victory gardens are back in vogue, as locked-down families have begun to use gardens as food sources and home-schooling tools. This is a beginning, but we should also, as a nation, begin to discourage the wholesale obliteration of pollinators, backyard wildlife, and endangered--but ecologically necessary--predators. Community design needs to abandon the suburban-sprawl model and focus on walkability, renewable resources, and small, local grids.

Progress does not necessarily require growth. The political economy of the United States needs radical rethinking. For way too long the measures of economic "success" have been based on how many billionaires there are, how big an industry can get, and gross national products based on how much stuff a country can produce--whether or not it's necessary or truly desirable. Some very serious thinking about building a sustainable economy needs to happen, immediately.

Assess the differences between what we truly need and what we merely want. Readers of my stuff probably get tired of hearing my rant on about what William Morris called "the education of desire." But my brief stint in the "ad biz" made me realize early on that human beings are easily persuaded to want stuff they don't really need, even when it's bad for them, and when it's bad for everyone else. So supporting industries like fast fashion and industrial agriculture is most often founded on misconceptions about what people really do need. Yes we need clothes. But do we need clothes that require intensive overuse of land, severely underpaid and exploited workers, and a preposterous amount of waste? Yes we need food. But do we really need to be able to obtain perfectly formed, uniformly sized, out-of-season tomatoes shipped thousands of miles for our immediate satisfaction--or could we learn to eat vegetables and fruits in season and that need only be distributed to local markets? At best, luxury foods should cost far more than what's locally obtained, and the farmers who produce locally should be fairly compensated.

These are the concerns that preoccupy me on almost a daily basis. They're only a few of the many points that need to be covered in any kind of a national conversation about how to be better than we currently are. I've left out a great deal, including the vastly important questions of social justice and equality embodied in the Black Lives Matter movement, universal health care, and other manifestly critical issues. I will, no doubt, address these in later posts.

I am fully aware that at my advanced age, my relatively secure economic condition, and my lack of breeding progeny, I don't have much of a stake in the future.  But every time I go into the back yard, even during the blazingly hot, humid days of a north Texas summer, I'm filled with wonder and appreciation for this little spot on this huge planet--and hope sneaks in.

Arrived here via Coming Up Close and having read your 'manifesto' want to read more of what you think/believe. I blog as the imagined musings of my cat probably so as not to have to commit myself too openly to the environmental values i hold very dear. I get accused of being preachy, so try to do more say less. Can't wait to retire from paid but not particullarly fulfilling work to do a lot more or the planet. F

Well, thanks for stopping by the Farm, Tigger. My recent post was not so much a manifesto as a reiteration of many of the topics I rant on frequently, but you're welcome to spend as much or as little time on it as you can endure.

I was, in fact, much more circumspect earlier on, but after I retired and began to wallow in my crotchity-ness, I found it much more fulfilling to try to articulate my observations and anxieties as I move into the middle of my eighth decade on the planet.

As someone who's also been owned by cats for most of her life, I'm looking forward to checking out Tigger's take on the current state of the universe.