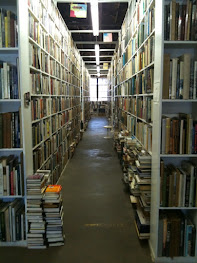 As I often do, I'm going to preface this post with a warning: beware of peregrination. Where I start is undoubtedly not where I will end. I'm not even sure it will even make sense. But connections have been buzzing through my busy brain for the last couple of days, and this is my effort to collect them--and to excuse the title.

Larry McMurtry died yesterday. He was only 84. I say only, because my father died at 83, and that was far too young for me. Anyway, I'm not really much of a McMurtry fan; I've only ever read Walter Benjamin at the Dairy Queen, and except for Hud (a million years ago), I hadn't seen any of the films made from his books. But I was a fan of his store in Archer City, Booked Up (pictured at left) to where in our halcyon days friends would caravan out for a day of frolicking among the four warehouses that housed the wonderfully expansive collection of books in the most unlikely of places. We'd head out in the morning, stop for lunch at The Green Frog Cafe in Jacksboro, and not head back until we'd spent ourselves silly on boxes full of literary and philosophical treasures.

There weren't many bargains to be had, because McMurtry knew what he had and what everything was worth, but those trips were responsible for many linear feet of bookshelf occupants in our house to this day. I only spoke to him once, when he asked me if he could move my pile of books to a bench so he wouldn't trip over them while shelving new arrivals. But he was usually on site, and often managing the till when we checked out.

In 2013, I joined a Kickstarter campaign to fund a film about the gigantic auction McMurtry held to sell off the contents of all but one of his spaces, Books: A Documentary. I got a great tee-shirt, a tote bag, and some nifty bookmarks, but haven't heard anything about the film itself since 2014.

Now, The Beloved Spouse and I own several thousand books, but we don't collect them. Lots of people do, which is why the auction at Booked Up did very well. The shop in the original building still exists (although what will become of it now, I don't know), but it's been at least a decade since our last trip. We've become more sparing in our accumulation of late, and the Plague has forced us to order books online. One of the reasons that McKinney was attractive enough for us to move here twenty years ago is that it had an antiquarian bookshop just off the Square downtown.  Alas, it closed a couple of years ago when the proprietor and his dog got too old to manage it. It's probably a tattoo parlor now; I haven't even looked to see what took its place. Archer City is a much smaller county seat than McKinney is, and it's rather surprising that McMurtry managed to keep the larger version of his enterprise going for as long as he did.

So, that was Thing One. Thing Two was inspired by my having noted in the letters section of this week's New Yorker a comment about Ann Pachett's piece in the March 8 issue, "How To Practice." Because The New Yorker occupies its own large share of space in our house (on shelves and coffee tables), I was able to locate it quickly, which I wanted to do because it's all about what the Swedes call "death cleaning." I'm at the stage in life where I love horrifying friends and family by talking frankly about a matter I consider immensely practical--even though I'm only just now in my 74th year, still ten years younger than my father was when he died. (Had he lived, he'd have turned 100 this Groundhog Day.)

Patchett's lovely little piece re-inspired me to go back to what I'd started some time ago. I've already done a great deal of tidying up and have begun to address some new issues, but the article renewed my resolve. I didn't know this, but TBS was already thinking along the same lines and just now walked through our study on his way out to the garage to see what he could do about its contents.

The impetus on his part began a few days ago when we rather suddenly realized that getting out of Texas was almost impossible--in part because of the effort it would take to get ourselves ready to move. Not even considering the expense of transporting what we don't want to get rid of, the physical labor involved is probably beyond us at this point. Nevertheless, the daily reminders of human mortality, and Patchett's timely admonition that what we don't take care of ourselves will be left to our survivors, makes a new effort at sorting-through our accidental collections a not just timely but also appropriate activity to occupy us for as long as the Plague persists.

What complicates the whole process is our increasing consciousness of waste. Everything that can be, must be recycled or repurposed or donated. So what can be, will be sorted into boxes for appropriate children, siblings, nieces, and nephews. We will, however, ask first, since we've been informed by numerous articles on similar topics that millennials don't want our crap. They're into experiences not stuff. But I'm not totally convinced, so I will ask. And then we'll box up the good stuff that might bring in a little cash at an estate sale, which my beloved daughter will no doubt be able to handle far better than I would. My greatest gift to her will, I hope, be the successful sorting of the boxes of memorabilia my mother had shipped to Dallas when she left Taiwan, and still hadn't dealt with when she died just before we moved north.

Mortality is central to being human. And memory is what staves it off, or at least makes it bearable. And the older we get, the more fragile memory--and mortality--become. Writers whose works have influenced our lives are well worth remembering, and so are the objects our forebears have left us and that have filled our homes and helped to shape our memories. Quite often, those objects actually consist of beloved books that have been passed on through generations. It was clear that many of the books I brought back from Booked Up had been just that sort of memento.

Because writers often gravitate towards books, it's probably no real coincidence that both Ann Patchett and Larry McMurtry own(ed) bookshops. Patchett's independent Parnassus Books in Nashville is rather different from McMurtry's, but if I ever have a chance to visit my oldest friend in the world (who lives there) I imagine it will be one of the first places I seek out. If TBS and I ever do shake off the bonds that keep us in Texas, I'm pretty sure we'll settle somewhere with a shop or two.

Larry McMurtry notes in Walter Benjamin at the Dairy Queen, as a reason for opening up his "anthology of bookshops past," that "books are the fuel of genius." And even though his legacy in Archer City is rather smaller than it once would have been, and even if it fades away for good now that he's gone, it's one that lives in the many of us who visited and spent so many happy hours within its several walls.

Image credit: The photo, an interior shot of one of Booked Up's four warehouses, is by someone called "Cohee (Talk)" via Wikipedia.

Posted by Owlfarmer at 7:07 PM

So much to think on. Books. Possessing. Moving. Death-cleaning. The last one has been on my mind a bit even tho I have moved often, travelled light and tried to possess little. Even so there is 'stuff'. I have no kids. The one or two family pieces i have are here because their previous guardians meant much to me - more than the piece means to me as a multi-generational thing in itself. It makes me feel obliged to ensure I mean enough to someone in following generations for them to want to become the guardian for its token connection to me - not to all those before, none of whom they ever knew. The rest of the 'stuff' they can call in the 'house-clearers' for.

A very nice tribute. I'm not much interested in collecting. I hang on to books that I really love and want to read again "someday". The rest I let go.