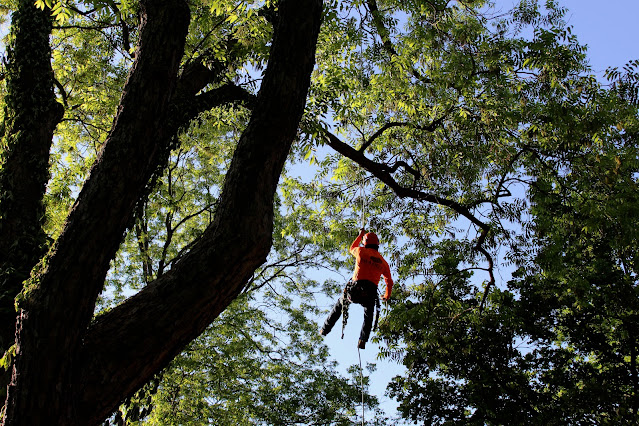 Spring had been toddling along, with repairs to the plumbing having been effected, and maintenance of our forest canopy having been attended to (see above), and various garden entities having budded, bloomed, hatched, fledged, hopped, and flown. The process is continuing apace.

But two weeks ago the unspeakable happened again, and I have (for me, at least) been rendered speechless. On May 25, The Dallas Morning News reported the killings in Uvalde with a one-word headline: "AGAIN." This week's New Yorker's cover (by Eric Drooker) says it all, wordlessly.

I grew up in a war-threatened world, but never had to worry that anyone would ever take a war-weapon and kill children, Black people, old people, religious people--anyone who got in the shooter's way. But it has happened here--in the country my father, brother, and both grandfathers had spent significant years of their lives defending--again, and again, and again. And it won't stop because our country lacks the moral fortitude to do what needs to be done, and our populace--in absurdly and frighteningly large numbers--lacks the interpretive skills to understand the very Constitution they insist they're "protecting." And Texas is at the epicenter of the madness.

I cannot do anything about it. Godless folk like me don't see prayer as helping anything, and I'm pretty sure any "thoughts" I might be able to "send" to the catastrophically bereaved families would amount to a teardrop in an ocean of sadness. I can send a little money where it's needed, and I can vote. Which I will do--to agencies that support children's welfare,  and for people who will try to rectify the damage done by intellectually and ethically challenged public "servants." But unless enough people are as angry as I am, these efforts may be for nought. We'll see in November.

In the meantime, with temperatures oddly low and rain uncharacteristically abundant at the right times, the seasons move along. My tomatoes are about to be turned into jam, and roasted, and eaten out of hand. In a week they'll be gone, and I'll spend the next three months trying to keep the plants from withering on their stems in hopes of a fall crop.

And since I have little to add to any conversation at the moment, here are some photos of our little oasis--our sanctuary amidst the madness. These are the reason and the means for our survival.

As long as the weather holds, it's easy to find solace in our little patch. Word from our families is generally good, although my 99 year-old cousin, Willma Gore, died recently only weeks away from her hundredth birthday (which is today). That makes me one of the oldest surviving Chrysler-Tate women; time to get my part of the story set down in prose, which I should be able to do thanks to Willma's efforts to record my Grandmother's memories of nineteenth-century pioneering in Nevada and California.
The Beloved Spouse has taken over some of the burden of researching our house for historical registry purposes, so we're hoping to get that completed by the end of the year: a nice hundredth birthday present to the house we love--and in which hope to finish up our time on the planet. Meanwhile, we'll keep taking care of the house and garden, and I'll keep writing about it when I have something that might be worth putting down.
My father's dying instructions to me were to "write at the end of your stint." He came from a family of historians (his mother Clarice Tate Uhlmeyer, his aunt Myrtle Tate Myles, and his cousin Willma Willis Gore, were all history buffs and also wrote about the family in many contexts), and he often wrote about family and Owens Valley stories for local outlets. My mother was a journalist, but her focus was on Taiwan, where she spent much of her adult life. Nevertheless, my genes have made it difficult for me to keep my mouth shut, which is why I've managed to keep this blog going for this long (fifteen years this month). Thanks to encouragement from some of my former students and occasional readers, I guess I'll keep going for another fair while.
Writing, as it turns out, is way of pursuing sanctuary: by imagining better times and better ways of living, we keep hope alive. Meanwhile, I guess I can just follow the advice of the old comedians, Bob and Ray (my Dad's favorites), who used to say, "Meanwhile, hang by your thumbs." Or at least by harnesses appropriate for preserving the welfare of trees.
Image notes: most of the photos were taken by iPhones, including my new mini; for the larger format ones I used the Canon Eos. Thanks to the guys from Preservation Tree, who have been taking care of our little forest for about fifteen years, for letting me snap shots of them doing their sometimes scary work.
Posted by Owlfarmer at 1:05 PM

I lime your comment about writing being a means of pursuing sanctuary. Indeed i write by hand every day, even the process is a form of meditation. Your garden sanctuary looks like one of the most wonderful places one could imagine living out your time on earth. The political stuff, as an outsider we can only stare in horror and shake our heads in a kind of warped wonder at a civilized (may i use that word?) society that can go on allowing its citizens to be shot down in the name of some antique constitutional principle. What constitutional rights do the innocent victims have?

I'm so glad to hear about your daily writing, and for your thoughtful reflections on current events around here. Having lived abroad for most of my early youth, I am constantly aware of how puzzled most "foreigners" find our behavior.

Do please keep writing. And thanks for keeping on reading as well.