In The Bleak Midsummer 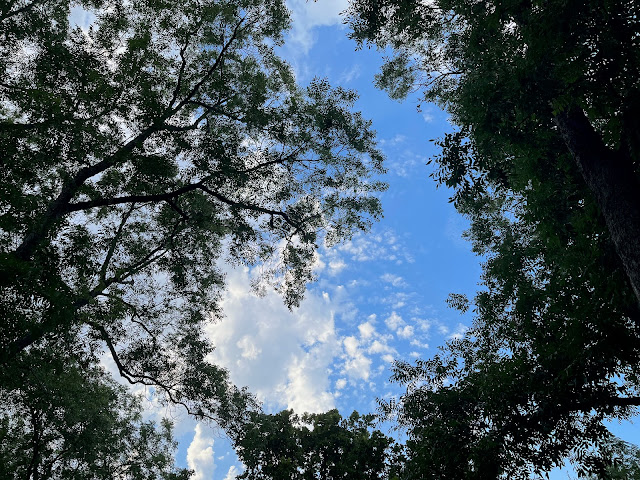 The Ides of July have recently passed, and we've only had a single below-100F day in the entire month. The forecast for the next week or so is not only over100, but between 103 and 107. Our single 95-ish day brought surprisingly tolerable temperatures overnight (down into the mid-70s), and allowed our brick-clad solid wood house to cool down enough that moving from room to room didn't require walking through a blast furnace.

Anyone who reads this blog probably already knows that we don't have "proper" whole-house (central) air conditioning. Rather, we rely on four window units in frequently occupied rooms. Old-fashioned portières (hanging door curtains) keep the cool in the designated spaces, allowing ingress and egress through the aforementioned over-heated areas. The Beloved Spouse has also brought in what we call "the auxiliary unit": a window-vented portable machine that we've placed in our upstairs bathroom (adjacent to the bedroom, which has its own unit) to help keep the dog from panting all night. It blows cool air in, helps lower the humidity (with the help of an overhead shower fan), and does a decent job of allowing us to sleep through the night fairly comfortably.

Our morning routine involves getting up at 6 am, turning off the auxiliary unit (but leaving the upstairs window unit on to keep the wood from heating up). Our overhead attic is well-insulated, but not the one that extends out over the front porch, and none of the walls are insulated at all (almost impossible to do, as we discovered when we began to renovate). We leave the downstairs windows open all night, with ceiling fans on. This manages to cool the house down enough that we can abide a morning in the living room under the ceiling fan, reading papers and doing crossword puzzles. Or it did until I started having to take Molly out for her morning exploration before the temperature rises to uncomfortable levels. So I've been reading the paper out under the trees and patio umbrellas, while doing some strategic garden watering. With a breeze, I can usually make it until 9 am or so before I have to go back in.

Then it's time to shut all of the windows, close off the screened porch, pull all the curtains and shades, and move to the one or two rooms downstairs we use during the day. I also try to get any meal prep needed for the day done as early as possible, because the kitchen doesn't have a good spot for an A/C unit. The fan works well to keep the cook from sweating all over the food, so we get by reasonably well. A small slow cooker and a "pizza" oven in the range keep both kitchen-heating and electrical use to a minimum. This situation doesn't strike me as particularly onerous, because I endured summers in Taiwan with no air conditioning at all, and my Owens Valley ancestors made it through countless high desert summers with hand fans.

The fact that this process will be continuing for the foreseeable future isn't what bothers me, however. My tolerance for heat is relatively substantial, and Molly is the most heat-tolerant cat I've ever known, Nylah just sleeps through it all when we can keep the humidity down. We bought a "cool pad" for her to sleep on upstairs, and when she's out of doors she finds a cool, shady spot, digs a shallow depression, and naps pretty comfortably. We spend time out of doors with the animals in the morning and late in the evening, with occasional short trips out during the day as necessary. Our back yard is generously shaded with a dozen or so full-grown trees, and our hog-wire fence on two sides allows for ample wind-flow. So we will no doubt be able to soldier on and make it through the next two months with only our high electric bill (for the curious, it's about USD300 for a 2300 square-foot house).

Unless, of course, the infamous, badly planned, and inexpertly maintained Texas grid fails us yet again. My February 2021 post (In A Bleaker Midwinter; with apologies to Christina Rossetti for my multiple ham-handed uses of her title for what has become a beloved Christmas carol) I recounted our adventures during what has become known around here as "Snowmageddon." Although ERCOT (the Electric Reliability Council of Texas; I should probably place quotation marks around the "reliability" part) swears that it will be able to handle the expected summer demand, grid customers have been asked at least three times already to conserve electricity by restricting our use of it between peak hours of 2 pm to 8 pm--and the worst is yet to come.

We do have the little backup Bluetti power station that can be charged with solar panels. We used it to power a heater during the winter 2020 tribulations, and we should be able to power our refrigerator if the lights go out this summer. We had hoped that the state would get on its horse and gin up the grid with additional wind and solar, but it's so beholden to the fossil fuel industry that change in a renewable direction will require a change of governor and the state legislature.

According to our Green Mountain weekly reports,  we've managed to cut our household use down significantly (we've never been exactly profligate in our use anyway). But it will be interesting to see how things work out once the McMansion owners can't "manage" with their thermostats up to 78F. One neighbor in the local Nextdoor group seemed positively giddy about keeping hers at 62, but her example doesn't seem to have been followed. One local news station reported that the initial request (which included avoiding the use of large appliances) resulted in the return of 400 megawatts to the grid: enough to power 80,000 homes.

I'm not sure what's happened since, but did see that bitcoin miners were magnanimously going offline in order to preserve energy. Which is just plain benevolent of them, since they're potentially responsible for using as much energy as the city of Houston. Really??? I don't even understand what it is these people do, but I sure don't want to have anything to do with it--no matter how wealthy bitcoins are making their addicts users (or whatever they're called). The Wikipedia article is useful if you're as ignorant about this operation as I am, but I'm not sure I really want to know. Everything I do find out makes it sound more and more like an enormous, energy depleting, carbon creating scam.

At any rate, if the gird does goes down, and we start experiencing the so-called "rolling" blackouts we did back in the winter version of this kind of dysfunction, it won't be just air conditioning units that go out. It will be refrigerators and freezers, and other appliances that make it possible for folks to live and work in the modern world. The only reason I can even imagine how people in apartment buildings and without any means to cool themselves down will deal with this (or die because they can't) is because I recently read Kim Stanley Robinson's description of a deadly heat wave in India that has haunted me since (see the first chapter of The Ministry For The Future).

Human beings are doing this to ourselves, with our refusal to do what needs to be done to reverse the damage we've already inflicted and to prevent future disasters. The deniers have had the upper hand for too long. We all know what to do, and we need to do it. 78 degree thermostat settings are only a baby step. But if enough people do it, it's not nothing.

Image note: The opening photo was taken on the day the temperature drifted downward to 95 and Dallas actually got a little rain. We only got clouds, but the difference between 105 and 95 is absolutely life-enhancing.

Posted by Owlfarmer at 2:58 PM