As autumn progresses into winter, I spend a lot of time looking skyward. This particular photo was taken just as we arrived for last month's sojourn at Cooper lake, and we weren't really sure what we were seeing. The magnified version (taken on a newish iPhone 13 mini) shows them a little more clearly: 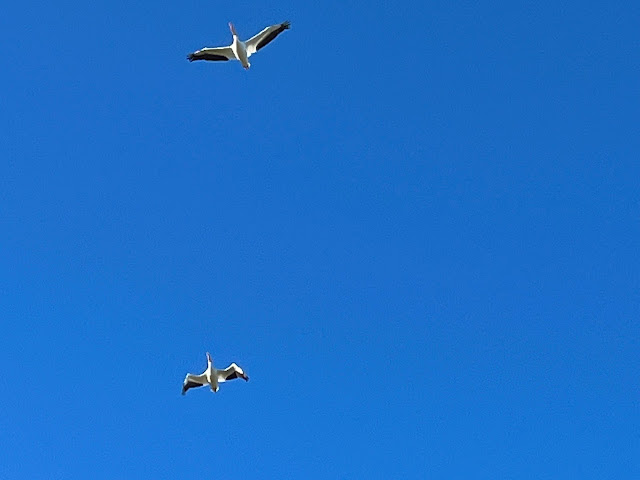 They were caught on the fly (ahem), so neither photo is particularly well composed, but I was happy to get them--especially after we asked the folks in the park office what we had seen. American White Pelicans migrate over and into Texas for the winter, and these were apparently making a flyover on their way to lakes south of Cooper.
While we were scouting the South Sulphur Unit of the park for future stays, we caught some pretty interesting clouds and cloud-contrail combos overhead: 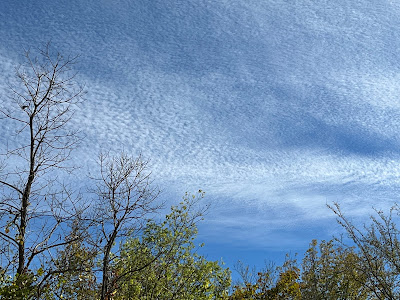 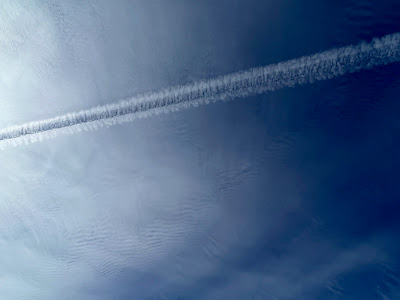 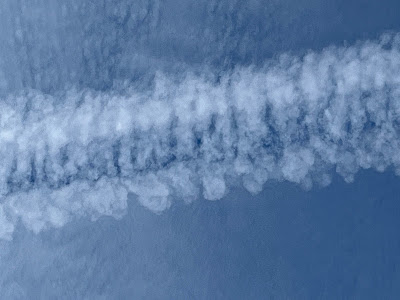 Back home, I caught a hot-air balloon on the camera for the first time this year. They're a fairly typical sight over this area during the fall, but iffy weather has prevented earlier appearances. The annual festival is held south of us, in Plano (quite close to where my kids were raised and The Beloved Spouse spent most of his teaching career) during the last week or so of September, but it's too crowded for us, so we have to make do with what floats north.  Our dog Arlo used to bay like a hound whenever they fired up their burners overhead. Nylah ignores them. 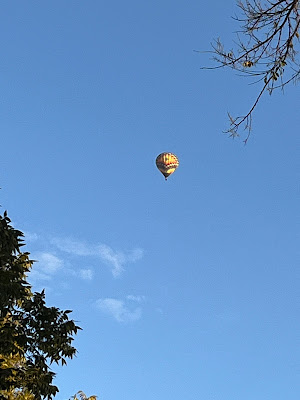 The tree canopy is still pretty thick over our little "farm," which means that our access to sky is still somewhat limited. But I did see some pretty stuff overhead yesterday while I was taking Molly out for an afternoon squirrel-stalk. 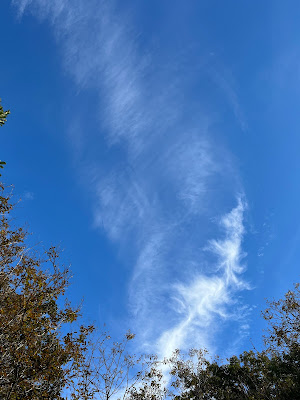 These days things are somewhat less dramatic than they were at the end of August: 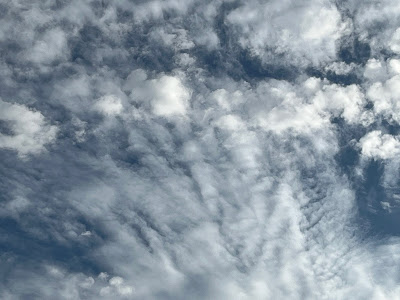 While I was looking for the above, I ran across the first shot I got of our baby Mississippi Kite (the one who fledged and flew for my last post). I'm not terribly quick on the mark these days, but at least his (?) colors are showing. 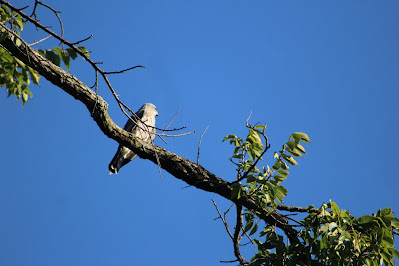 In general, I'm in a much better mood than I have been in some time. The ticker is working just fine, and the elections turned out far better than we had even hoped (although Texas is--well, Texas). Feeling as though we have dodged a bullet, we've entered a stage of equanimity that's become rare and unfamiliar. It was good to see that the "Zoomers" are coming into their own. This is particularly reassuring, because they're the ones who're inheriting the world we've made. Here on the farm, we're trying to do what we can to keep things from getting worse, at least environmentally, but there's so much damage that repair will take far longer than I have any hope of living to see.
Still, things are certainly looking up. And that means that my Skywatch Friday post this week is much more appropriate than usual. Have a good one, People.
Posted by Owlfarmer at 1:06 PM

Wow, beautiful skies and wonderful captures of the pelicans in flight. I didn't realized they were migratory birds. The close-up of the contrail reminds me of a zipper!

Lots of good captures there.

I love those pelicans of yours. We had them last summer all over the Arkansas River in Tulsa.

I love your skies and your attitude. I was pretty happy with the mid terms nationally but Oklahoma is Oklahoma.

Lovely sky shots. Contrails, provided there are not too many, make interesting additions to cloud formations.

We don't have pelicans but we do have red kites flying every day and annoying the corvids.

I keep hoping for an alien spaceship when I look upwards! Fingers crossed.