Of Comfy Chairs and Soft Cushions 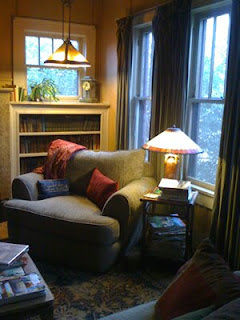 I have many things for which I am grateful, not the least of which is the fact that I can spend my mornings tucked into a comfortable, if not beautiful, chair, with a couple of pillows to support my aging lumbar region. Here I read the paper, and then, if there’s time, I read another chapter in one of the books I keep on the stand next to me, under the stained glass lamp we got on sale not long after we moved in. The chair is set in front of the living room windows, three double-hung jobs badly in need of re-glazing and painting, that face east: the best orientation for the house, according to my Asian-influenced upbringing. Artifacts from our stints in Japan and Taiwan lie around the room, and many of the aforementioned soft cushions are covered in fabrics from China—probably woven in some sweatshop or other for the export trade. I am always torn between my love for the colors and patterns of the East, and the ethical questions that arise from purchasing them so far away from their origins. I have no way of knowing how the people who made them are faring; so I can only hope that some portion of their cost makes it back to the weavers, fullers, and tailors responsible for their manufacture.

In fact, a good deal of the time I spend in my chair each morning is devoted to thinking about utopia—or reflecting on these dystopian times. The pile of books from which I glean ideas and which provide the fodder for most of my blog posts, almost always focus on what human beings have done to the world that makes it necessary for thoughtful people to wonder about the environmental and cultural impact of everything we buy, eat, wear, or otherwise consume. It’s not that I mind being mindful; it’s just that it would be better for us as a species, and better for the world as a whole, if we were more able to “spend” that time living in the world rather than worrying about it.

Writing and thinking occupy almost all of my “off” (i.e. non-teaching/grading/prep) time during the winter. I often spend Saturdays ensconced in my chair with my laptop, working on the “Farm” or on my latest literary effort (a science fiction novel about an older woman on an archaeological adventure), at least until the sun has risen enough to suggest the possibility of working in other parts of the house. The study is, unfortunately, the coldest and darkest room in the house, even though it faces south, because of the deep eaves that shade the windows. These conditions make it pleasant in the summer, but in winter I often have to sit at my desk with a comforter around my knees and a shawl over my sweater. It’s a bit like writing in a garret in a tenement somewhere, but not terribly romantic. On sunny mornings, though, the Comfy Chair is the venue of choice, especially when there’s a fire going, and one of the puppies is napping on my feet.

Come spring, when the morning temperatures are above 60°F and the weather fine, we move into the garden for our morning read. This year, since we’ll be rearranging things a bit, we’ll be able to sit at a table, with the coffee carafe and the newspapers, and perhaps even the laptop (I’ve recently discovered that the wireless connection reaches out there), which should make for some pleasant writing-mornings. The seasonal migrations through and around the house are something I’ve become much more aware of since I began working on the “Farm” in the first place. As I was writing More News From Nowhere, I spent much of my time “living” there—thinking about alternatives to “civilization.” But I have since begun to think more about the quality of life in my immediate vicinity, and how what I imagined in the book could in any way be implemented in “real life” (or the “RW” as they call it on my forum).

One of the few ways to escape the constant, intrusive, nagging, and mounting problems in the world has always been to become a hermit, and I can certainly understand the impulse. If I did not find myself regularly in the company of young adults who are inheriting what those of my generation have bequeathed them, I’d be very tempted to simply enclose myself in my little domain and lose myself in the works of Morris and the other utopians I’ve spent the last twenty years reading, or in the ancient world, or some other place not here, not now. But the kids I teach—creative, funny, sardonic, frustrating, but sometimes quite wise and much more optimistic than I—draw me back into the world at least four days a week, and make me want to fix things for them. I can’t, of course. And I’m too old and too tired to do much other than help them know some of what I know, so that maybe they can do something to fix it for themselves. Maybe our job now is to help them keep wanting to figure out a way to keep the world going.

Meanwhile, I need to get out of the chair and into the garden. I picked up herb seedlings and lettuces at Whole Foods yesterday, and need to get them in the ground—or at least into pots where they can be protected if another freeze sneaks in on us. Planting a garden is always a sign of hope, so perhaps I’m actually more sanguine than I pretend. And I now have to go make entries in a new garden journal, which gives me something else to look forward to doing in the Comfy Chair—at least until the puppies start poking me with their soft noses and luring me out to get some actual work done. Perhaps we should have named them after Michael Palin and Terry Gilliam, in honor of their antics in the Python sketch that suggested the title of this post. After all, as long as we live in a world that can remember its past well enough to make fun of it, perhaps we really do have a future.

Owl - your comfy chair reminds me of the chair I had in my garret, my first home away from home back in the 60s. In it I read and re-read B.F. Skinner's Walden ll, Summerhill and some Huxley (Island?). Of course my comfy chair did not have the graceful setting yours has, but it was the haven and crucible of my idealistic dreams and ideas, many of which have not abandoned me still.
I do agree with you - planting in the Spring is a sign of hope. Here it is still too cold for planting, my Helleborus Niger is in spectacular winter bloom, but the lengthening days are full of promise.
By the way, I have been reading More News From Nowhere and find it full of positive ideas. Your writing of details left me with clear visuals - I felt like I was seeing a movie in my head during reading - and thought it would make a wonderful movie that might provoke intense speculation.
My husband and I spent some time at Paolo Soleri's Arcosanti some few years ago. That was a Utopian vision that ran out of steam and money. Dop you know much about it? I'd be curious to read your ideas about that proposed settlement. GEM

GEM: It's good to hear from you, and to hear that somebody else is getting into More News from Nowhere. I think that one reason I've been able to "see" it reasonably well is that the landscape is so familiar to me. I'm in the process of planning a trip out there later this month, mainly because finishing the book made me incredibly homesick.

Don't let the "elegant setting" fool you; the windows all need re-glazing and there's almost no paint left on the window sashes; the floor has been stripped, but not finished--and we've been in the house for eight years! Some tasks are better designed for younger folk.

I'm very familiar with Arcosanti, and with many of the utopian efforts put forth in this country (including one, La Reunion, here in Dallas). Arcosanti is actually still going on to some extent, I think--but updating what I know about these utopias is certainly an idea worth pursuing. Thanks for the suggestion.