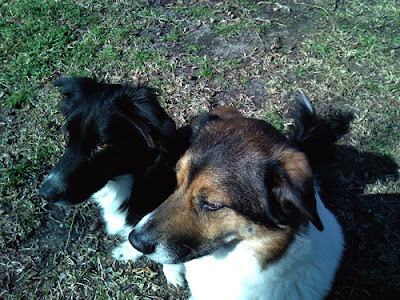 February is about the cruelest month for gardeners in north Texas because the weather is so very tetchy. It's typically coldest around mid-February, and even when it isn't, one daren't plant anything for fear of a late hard freeze. At the same time, we're so incredibly weary of having to go out and cover everything not freeze-hardy we're trying to overwinter (being as we are at the nexus between hardiness zones seven and eight) every time the inconsistent TV weather-predictors threaten freezing temperatures, that we tend to get sloppy. Misjudge once, and there go the gerberas we had hoped would make it until spring. This has happened to me more often than not, and so far this year I've been bloody lucky.

The trick seems to be to keep things sheltered near my east-facing front porch, where the balustrade and the deep eaves of my prairie/bungalow hybrid house offer a bit of protection. We've had frosts most mornings for the past week, but a fair amount of rain before that--so the damage seems to be minimal. 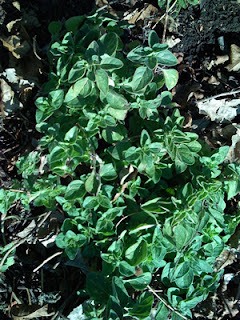 The "puppies" (now four years old) went out to help me reconnoiter in the accidental garden this morning, and I did notice that some stuff had already started peeking through the as-yet unraked leaves. I fished around beneath the rampant henbit and chickweed to discover that much of the Greek oregano I had thought long-dead was still thriving. The fig trees severely beaten back two years ago by drought are now getting ready to sprout heavily, and my chives have also risen from the dead. Not only that, but the Mexican mint marigold is starting to emerge from under last year's twigs, so even though the rosemary and thyme will all have to be replanted (both had been going strong for the eight years we've lived in this house, but died off in last summer's heat), I don't have to start completely from scratch. There also seem to be several herbs surviving in the front garden that will provide cuttings for the new potager outside the kitchen door.

Our canvas/wood/metal "summerhouse" bought on sale from Target several summers ago is now a goner, thanks to a fuzz-tailed tree rat who decided that shreds of it would make nice nesting material. The little beast caught a snagged corner and ripped a three-inch wide strip the full length of one side. But the cheesy wood parts had already started splitting apart, and we'll probably be able to salvage the metal for low garden fences or something, so some of it can be recycled into useful bits. I was going to have to move it anyway, so I guess the squirrel did me a favor. That doesn't make it any less annoying that the snarky little rodent didn't ask my permission first.

I may be seeing signs of spring in the nesting efforts of squirrels and plants' emergence from dormancy, but I don't think planting weather's all that close. The light's just wrong: way too harsh and bright. There's a full month left until the equinox (when the sun will shine through the east window of my dining room for the first time this year), and it's the quality of the light that centers me in the season. With few leaves to filter the sunlight, the dogs and I emerge from our dim house into nature's equivalent of fluorescent-bulb-lit daylight. They even squint when they're out in it, and it takes my progressive-sunglasses several minutes to adjust.

As the ferny little catkins start to emerge from the pecan trees, though, they'll soften the light up considerably, and the planting will begin in earnest. The digging starts next week, and a month from now we'll be leaving for a ten-day streak to California and back for our only "vacation" this year. I need to see spring begin in the desert and what Owens Lake looks like with some water in it before I can get back to learning to love the prairie. But by the time I return, I'll be ready to start another quarter of teaching, and another, more ambitious cycle of planting, growing, and harvesting--and learning to do so more carefully than I have in the past. I won't be able to depend so heavily on accidents as the climate warms, so the next few gardens will have to be much more purposeful and mindfully tended, as I learn how to become a sustainable gardener. 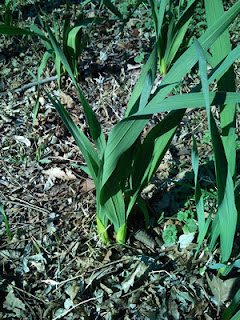 As the dogs and I got ready to go back into the house, I turned to look around and noticed that serendipity isn't completely lost. What started out as a tiny patch of two or three wild gladiolus has now spread, leaping sidewalks and brick patios to sprout up in four or five distinct locations. In a few weeks I'll have at least three dozen plants, all sporting multiple fuchsia-colored blooms on foot-long stalks. I'll have to transplant a few when I dig up the new garden space next weekend, but these are terrifically hardy plants--one of the many accidental gifts I've received over the years here. I think they got mowed the first couple of years, but once I discovered what they were, I let them be, and they start blooming just as the muscari finish. Now, if only the blue-eyed grass would come back, I'd really be content.

Maybe I'll cheat and plant some, just to make sure.