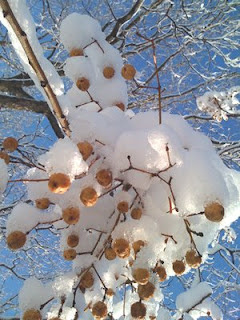 I once helped run a campaign for student government president at UC Riverside on behalf of a guy named Larry Bliss. Clever person and half-assed artist that I am, I ripped off Charles Shulz’s dancing Snoopy and under it drew (in cute ‘60s-style balloon letters) the slogan that I’m using to (sort-of) title this post. I don’t even remember if Bliss won the election, but I’m assured by the alumni magazine that he’s alive and well.

As usual, the urge-to-post is prompted by a confluence of newspaper articles and NPR broadcasts, together with latent notions brought to mind by snow and the realization that we’re not going to be able to escape north Texas after all, at least until summer.

I spent the entire day yesterday calculating a route, distances, and time for our proposed trip to California in a couple of weeks. I had made it only to Cathedral Gorge in eastern Nevada by suppertime, when my husband discovered that because of a mix-up in dates, we wouldn’t be able to go after all. It turns out that his spring break and mine do not overlap as we had originally thought, and he would miss two important tennis tournaments. So, instead of letting the players and the other coach down, we decided to postpone the trip, and I was plunged into a fit of melancholy that lasted only until snow started falling a couple of hours later.

This morning there is a six-inch deep layer in some parts of the yard (actual snowdrifts!), and 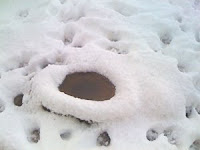 the puppies—who haven’t seen snow since they were infants—are ecstatic. That last time, on Valentine’s Day four years ago, coincided with my last trip to see my father before he died, so that memory is rather bittersweet. I thought of him when I looked out and saw the ancient metate that has been in our family for nearly a hundred years, now ensconced in my back yard, and looking a bit like a caldera, with its rim covered with snow; he would have loved the picture I took with my new iPhone (yes, I know; another Luddite bites the dust).

As I settled into the Comfy Chair and began to read the paper, I came across mention of Eric Wilson’s new book, Against Happiness: In Praise of Melancholy. I’d heard a brief bit of it on All Things Considered last month, but (because I have yet to start carrying a note pad in the car) had forgotten about it. I also remembered hearing about Eric Weiner's travelogue, The Geography of Bliss: One Grump's Search for the Happiest Places in the World, on Weekend Edition, and although I've yet to read either book, I was pleased to note that the world may not be as full of happiness-addicts as I had feared. Wilson's book, especially, seems to have garnered some interesting responses, from a blog for Moms to Book Forum, so it's got my interest piqued. Now I'm going to have to read both of them.

I have long been intrigued by the attractions of melancholy and the improbability of a sovereign nation’s having been founded on some foggy idea of insuring “life, liberty, and the pursuit of happiness”—none of which it could actually guarantee. Utopian literature often focuses on an equally fuzzy notion that everyone should be “happy,” and this is one of the stumbling blocks to writing about any kind of “ideal” society. I have also long been disturbed by the often vapid expressions of people who claim to have completed their lives by having found Jesus (or Buddha, or the Way), as if all the struggle involved in actually living (including its pains as well as its joys) were something to be done away with. Perhaps our collective reluctance to embrace the “down” along with the “up” is what has prompted pharmaceutical companies to keep inventing drugs to “cure” every minor ache and pain, as if to numb us from reality like Soma did in Brave New World. (As an aside, there actually is a drug called Soma, and it looks familiar to those of us who have read Huxley’s quintessentially dystopian novel.)

If, as I also read this morning (in a review of the new Fox series, New Amsterdam), death is what makes life meaningful (the protagonist calls it “God’s joke”), surely the absence of happiness is what makes happiness mean anything at all. Philosophical happiness, in fact, seldom has anything to do with the feel-good sensibilities of self-help books. It’s about being intellectually fulfilled—recognizing the good, even if one can’t actually attain it (Plato). Rather than seeking to forget about death (The Ultimate Sad Thing), philosophers tend to find in it a reason for living. Martin Heidegger’s term Sein zum Tode (being-toward-death), for example, actually describes what it means to be human: the human being is the only one aware of its own mortality.

In my utopia, happiness does not describe a blissful state of existence. I’m not sure I’ve even used the word in the story. What my characters try to build is a world in which people can exist without all of the artificial angst-makers the modern world presents: pollution, inequality, terror, greed, environmental degradation, violence, racism, and the like. Their freedom lies in the ability to do what people need to do, and to live meaningful, creative, fulfilling lives that center on be-ing, and not on the denial of death.

Happiness is a slippery notion, and I welcome books that buck the trend of trying to guide people out of “negativity” by urging them not to be “cynical” or “pessimistic,” or by developing step-by-step programs that earn their authors untold wealth by fleecing people who’d rather not think. Thinking is difficult and frequently uncomfortable, but it keeps the mind alive. Certainty is unattainable (and probably not any more desirable than blissful happiness), but the search for understanding is boundlessly rewarding. All the “definitions” of happiness promoted by popular culture seem to suggest that one should choose to be a contented fool, rather than a discontented Socrates.

And so I go forth to wallow in my uncertainty (Clinton or Obama?), and to mull over my delayed escape from Texas. I can, however, assuage my melancholy by planning to spend the time re-glazing needy windows and planting my new garden. And I can go out and watch the puppies, contented fools that they are, and ignorant of death and destruction, while they romp in the snow—which is, sad to say, melting as I type.

Posted by Owlfarmer at 8:16 AM

You are right... Grandpaw would have loved that picture indeed. I will never forget the beautiful snow on Valentine's Day '04 that delayed our flight so many hours and added to our already stressed spirits. However the thoughts of fluffy snow and fluffy puppies brought us much comfort that weekend.

I have refused Valentine's dates every year since then, because he was the best one I have ever had(definitely better than an appendectomy)! Nothing can top his hand squeezes, your homemade lasagna, and surrounding the greatest man ever with lots of family and love.

The last few posts were very relaxing. If only I could find more time to take a breath and enjoy what nature has to offer. For now all i have is the local squirrels foraging for droppings from the live oak trees squeezed between the apartment buildings, and the morning racket of the resident blue jay in the community courtyard.

Apartment living does make it a bit difficult to spend time contemplating nature--so good on ya for noticing your blue jay friend. You might want to check and see if the hawk is still hanging around the seventh floor of the parking garage. The "tree farm" to the east of the building seems to attract just enough critters to help supplement a meager local diet--if in fact she's still there. She'll probably be permanently gone once they replant the trees when the construction's done. Sigh.