The Idea of Order in East McKinney 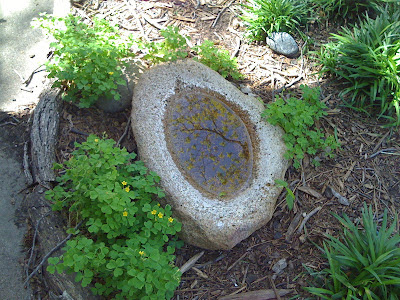 She was the single artificer of the world
in which she sang.
--Wallace Stevens, "The Idea of Order in Key West"

Every now and then I'm bothered by my apparent inability to create any kind of truly ordered environment. My house, my yard, my desk, my "office" (it's actually called a "workroom" because it's a room where about a dozen instructors attempt to get work done)--none of the spaces within I live are particularly ordered. That is, there's no real regularity about them, other than their physical boundaries (walls, a fence--of sorts, sidewalks, alleys). Patterns, especially in the back half of the house property, are difficult to distinguish, and there doesn't seem to be much of anything that's actually planned.

I did think I was going to dig up a nice neat rectangle in which to grow veg, and that I would also create a more or less formal herb garden in a square outlined by a concrete sidewalk. Last year we used brick from an existing path (which had once led to a now-dismantled, corrugated fiberglass-enclosed compost bin, but over which a Rose of Sharon bush had grown, so that only short dogs could actually walk on it to the bin) to create a patio space for a fire pit and/or table and chairs. But at the moment, the only real structure is that patio and the concrete walk. The herbs have gone in rather haphazardly, and a couple of tomato cages (made from recycled grid-wire) stand at the ready (in case I actually acquire tomato plants to place in them). Two supports from the old summer house stand in the eastern corners, one for a squash plant, another for who knows what. Later in the season, assuming that I eventually get most of the space planted with something, it'll probably look really nice; at the moment, it's pretty much just bare and scraggly. The "before" picture is featured in my last post. I'll update it when I've got this week's herbs installed.

When I first moved into this house, eight years ago, the southwest corner of the property was bordered by luscious blackberry bushes and some grapes, but the entire area was otherwise bare, except for poles and grid wire that had been used for growing beans. The earth had been nuked with every pesticide imaginable, it seems, because there were no bugs that summer, save for a few mosquitoes. No butterflies visited, no fireflies, and there were no earthworms for several years. I planted herbs, and a few flowers, but nature pretty much had her way--planting wild primroses, sunflowers, pokeweed, Texas dandelions, and even a basketflower or two. Every year more wildness happened, and I kept planning to till an open space for planting. Tomatoes went in back there, and peppers, and more herbs, but few of those survive today: oregano, one patch of chives, germander, and Mexican mint marigold. The rest is wild grass and baby trees, with honeysuckle growing up them. No order. Perhaps pattern--but indiscernible to me. 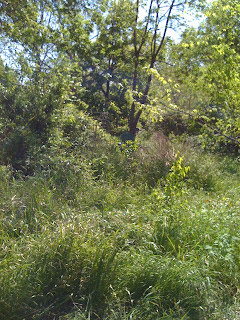 Just this week it occurred to me that what I have growing in that little .25 acre plot is my own personal carbon sink! By letting nature take its course, I'm actually helping to offset my own carbon expenses by growing a carbon-dioxide-sucking area that will consume more C02 than it emits--and perhaps absorb some of the hot air that gets spewed on this blog . . .

So the Accidental Garden is turning out to have a purpose, if not a pattern--and has inspired me to let it develop into its own little wildlife habitat, by interfering as little as possible (I do have to trim the wild grapes out of the burr oak if I want it to survive--and it's a great tree), by letting things take their course, and relegating path-building to the dogs. Over the summer, I'll try to produce a species map on which to log what's happening, but gradually, I think, I'll move out all of the purpose-planted flora and just see what happens. I will probably leave a chair or two in there, for sitting and contemplating what I (and Mom Nature) have wrought, because it has the makings of a sanctuary. At least until some bureaucrat from the city comes by and makes me chop everything down because I'm violating some bloody code of civilized behavior. 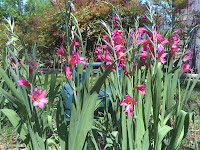 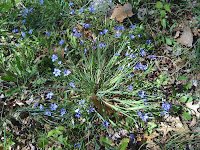 My lack of order, it seems, is also being visually rewarded. The wild gladiolus "forest" is in bloom, and just yesterday afternoon I discovered a patch of blue-eyed grass in the front yard, tucked in under a pecan tree. New mullein florets are springing up in gangs near the irises (which have bloomed profusely despite my efforts to let them die off). Iris species, except for the wild flags one finds in mountain meadows and other wilderness areas, are the bulldogs of the flower world. They're presently so completely engineered that no matter how charming (and both bulldogs 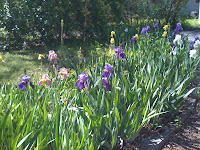 and irises are charming), one feels guilty about having them. I'm not particularly fond of mine (irises, that is; I've loved my bulldogs) because they're a constant reminder of the previous property owner, who had no particular love for anything wild--except for the maniac squirrels that populate the neighborhood. And they're about as wild as the iris garden: completely fostered by human existence. But now even the front border, which has been neglected almost completely since last spring, is putting forth blossoms of the hot colors (reds, yellows, oranges) planted there. If it weren't for all the peeling paint and the unmown lawn (to be remedied tomorrow), the place would look practically civilized.

But my real goal seems to be to mitigate the effects of civilization, not to propagate them, so what goes in front this year will be as many native plants and odd-ball, water-thrifty additions as I can locate. This should help throw a bit of disorder into the mix, and help balance the porch-rail painting operation that began this morning, when I started scraping off the three layers of previous colors (including turquoise, of all things) in preparation for sanding and priming. I hope that's not too orderly of me, but it's really designed to keep entropy at bay, and keep the house from falling down around our ears.

My apologies to Wallace Stevens for my cavalier modification of his title. I am, alas, far from the sea, and don't sing all that well any more. But I'm frequently reminded of this poem when I'm out there, in my world--the one over which I have little control, and little ability to bend to my will, but which seems, nonetheless, to be the product of my own making.

Top photo: My grandmother's metate, with yesterday's rain reflecting a leafing-out pecan tree.
Posted by Owlfarmer at 8:34 AM

Geez why did you have to bring up the tomato cages? Those suckers HURT if you get your paw caught in em. Didn't you destroy them after they tried to eat me?

Relax, Homer. If you can keep your enormous carcass out of my garden, you'll be fine. The new "carbon sink" version of the old garden is a technology free zone, and even a big bozo like you would find little to injure himself. And shouldn't you be dismembering a toy gorilla or something instead of reading my blog?

Reading this post made me distinctly think of a quote that I think you may like from Richard Bach's Illusions: The Adventures of a Reluctant Messiah. If you haven't read it, you may like it. I recommend it to practically everyone. If you need a copy to read, I'd be happy to loan mine out, as well as the accompanying Messiah's Handbook with it.

"Imagine the universe beautiful and just and perfect. Then be sure of one thing:

The Is has imagined it quite a bit better than you have."

Well, now you need to read some real philosophy! If you want to know about being, you'll need to start with Kant and Hegel and work through to Heidegger and Gadamer . . . but not all by yourself, because real philosophy needs conversation and dialogue. As I mentioned in class, Bach is one of two writers my students tend to encounter in their teens, the other being Ayn Rand. I was so hardened by Rand, in fact, that Bach never did appeal to me--even after I'd made it through my "objectivist phase of existence" by the time I turned 19 or 20.

The attraction of these folks is that they offer answers when we haven't yet acquired the background to know what the questions really are. So after I encountered Plato and Aristotle and the rest of the history of philosophy, Rand seemed shallow and simplistic. I really did try to read Bach's first book, but it was, by then, just too fluffy and new agey for an ACMAW (I've probably been one all my life). His "Is" is a watered down, simplified, predigested, and contentless version of Heidegger's Dasein, with some mumbo jumbo thrown in. (Otherwise, of course, I have no opinion on the matter . . . ) A friend describes this sort of thing as "vulgar romantic pantheism" (or VRP--prounounced "verp"--for the acronym lovers). That's not meant to disparage you, because I understand the attraction. But now you're probably ready for the big boys (and girls, although there are fewer of them). I recommend Susan Griffin, a poet and writer about nature and women. Her first book, Woman and Nature is complex but accessible, and you can probably pick up a copy at Half Price Books for cheap. Check out her website, too, at http://susangriffin.com/. And thanks for being such a good sport.