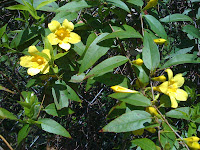 One thing about Spring: it’s busy. I have to make choices I normally wouldn’t have to, because everything’s so demanding. Get out there and plant stuff! Clear out the weeds! Pull the wild grapes out of the bur oak! And do your normal stuff—clean house, cook, read, prep for classes. What’s an old gal to do?

I did manage to spend the better part of Friday and Saturday working on the sodden plot for the potager, and I got some yellow squash and a tomato in. I’m not sure how either will do, because 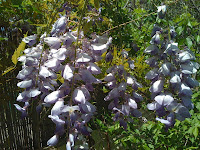 I’m not sure about the amount of sun, but I’ll put in a couple more tomatoes in test plots elsewhere, and some beans. The rest will pretty much be herbs, all of which are still sitting on the table out back, waiting to be transplanted.

Two observations: color in my garden works on a complimentary schedule. It happens elsewhere, too, such as when the bluebonnets and the Indian paintbrush bloom together. In my yard the yellows and purples come out in tandem: Carolina Jessamine, mullein, yellow oxalis (or sorrel, I think), dandelions together with grape hyacinth, ajuga, henbit, and some little purply lily-like things that come and go so quickly (and there are so few of them) that I never remember to look them up or get a picture. In Chicago I could always count on the violets to be first up (the season starts much later up there), but then the pattern would be similar. 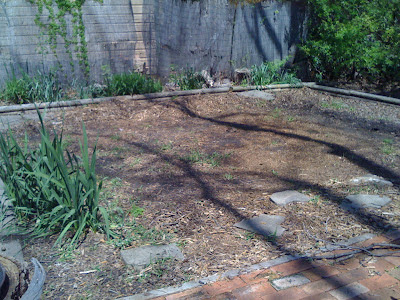 The other thing I noticed this weekend is that accidental gardens promote accidents. Before the heavy rains of last week, my husband had started tilling (with a “garden weasel”) the plot I’m using for the new herb garden. He was stopped by the deluge, which turns out to be a good thing, because (in the meantime) I picked up a copy of the latest Mother Earth News, with a nifty article about low-maintenance gardens. Lee Reich offers eleven tips for starting a new garden, and the very first one is “Minimize soil disturbance; always try to preserve the natural layering of the soil.” Hot dog! A really good reason not to till up the whole area—just what needs disturbing to allow planting. The rest can be covered with mulch to make pathways. Another idea was to plant the food garden as close as possible to the house. Well, now I'll be able to step out of the back door and practically fall into my dinner.

I then proceeded to use two of the corners from the old “summerhouse” to support the yellow squash and tomato plants I’d bought from Whole Foods last week. I put the one for the squash in the corner of the potager, and the other outside of it, open to the late afternoon sun (I hope; the pecans haven’t leafed out yet, so it’s hard to tell). There goes the plan for a veg garden outside the concrete sidewalk area. I can’t seem to get away from wanting to sit there in comfy lawn chairs, instead of tearing it up to plant things in neat little rows. Pots of herbs surround that support, which (again, I hope) will sport a nice big patio tomato plant as time goes on. Photos will be posted as soon as everything settles in.

So the new plan is to visit a couple of nurseries this week and pick out stuff on a whim. And then to plant it where it “wants” to get planted. We’ll see. Beginning-of-quarter planning interferes, but if Spring Fever proceeds apace (and if the weather holds), I’ll be getting up earlier and gardening before I go down to Dallas to teach.

One more thing: I’m developing some “rules” for aging (modeled on the “rules” for technological development with which I regale my students). The first of Uhlmeyer’s Rules For Becoming an Old Bat is “Old people shouldn’t get sunburned.”

Idiot that I am, I forgot to use sunscreen on my shins. I usually cover up pretty well otherwise, with a long-sleeved shirt, hat, socks, shoes, and gloves. But I had on pedal pushers (Capri pants, I suppose, is the more up-to-date term), and my shins got too much sun. Now, Rafael Nadal (how's that for a cheap plug for the U. S. Open?) wears these pants to play tennis in (“pirate pants” my tennis-coach husband calls them), and he looks pretty good. But old folks don’t tan like that. As a result, I have splotchy red shins between my white sock line and the equally white line where my pants stopped. Next time, longer pants.

Finally, in my never-ending search for blog fodder, I picked up a couple of books during Border’s educator appreciation weekend (25% off almost everything). Book-shopping is another reason I didn’t get as much done in the garden as I wanted. Anyway, look forward to ruminations involving Kurt Vonnegut’s Armageddon In Retrospect (a collection of unpublished stuff, gathered by his son Mark), Lee Siegal’s Against the Machine: Being Human in the Age of the Electronic Mob, Jeffrey D. Sach’s Common Wealth: Economics for a Crowded Planet, Margaret Atwood’s Penelopiad, and Kim Stanley Robinson’s global warming trilogy.

It’s going to be an interesting Spring.

Posted by Owlfarmer at 8:13 AM

This makes me want to buy a small kiddie pool for my patio and grow my own veggies. Hooray for Nadal! I like him better than Roger Federer. And football (soccer) is starting back up! Ahh spring is great, and I'm longing to graduate so I can enjoy all the activity that it brings.

Well, I won't tell Tennis Boy what you said about his Tennis God, Federer, but good on ya for appreciating the good sports. I'll have to work on converting you to the Religion of Baseball as well.

It's pretty easy to grow veg in pots on a patio--you just need good quality organic potting soil, some compost to mix in, and some Worm Poop for fertilizer. My son and his wife grow luscious things on their Seattle balcony, and I used to grow stuff in a sunny window in my apartment in Philadelphia. Herbs do well, but so do patio tomatoes and banana peppers, among other things. Whole foods has some good strong patio tomato plants for about six bucks (mine's already got fruit!). Have a go and see what happens--all you'll need is dirt and a gallon pot.