Heraclitus said it. You can't step in the same river twice, because everything's in flux. Boy, is it.

Last summer I posted an item on the wild fires in the Owens Valley, and during the last two days I've learned yet another lesson about how nature works.

The area lies between the Sierras on the west, and the Inyos on the east, forming the deepest valley in the lower 48 states (Deepest Valley is also the name of a definitive book on the region, originally written by Genny Smith). The rain shadow effect, which causes most precipitation to fall on the western side of the Sierras, creates a high desert climate with annual rainfall at about 4 to 6 inches. Except for dwindling snow cover and receding glaciers, things have looked pretty much the same in this part of California for as long as I can remember. But when stuff happens in this place, it really happens. 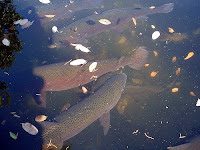 The combination of burned-out land and a torrential rain in the mountains produced this last Sunday a mudslide of proportions big enough to cut a swath through the valley north of Independence, destroying parts of the historic Mt. Whitney Fish Hatchery. The building itself was spared, but homes in the area (including those of hatchery personnel) were damaged or destroyed. No human lives appear to have been lost, but a couple of cats didn't make it--nor did 3,000 rainbow trout. The hatchery, according to the Fish & Game people, is the "sole source for Golden trout eggs in California," so the impact could be more far-reaching than its immediate devastation. I'm not sure yet whether the eggs and fry were damaged (I seem to remember some in the main building), but losing several thousand pounds of rainbows isn't exactly small . . . well, you get the drift.

The slide covered a segment of the main north-south transportation artery, U. S. 395, causing delays of several hours for people bent on returning to LA from their cool weekends in the mountains. But it spared the L. A. aqueduct, which carries a good deal of the valley's water south, much as the highway carries the cars. This is the same aqueduct that's partly (although not completely) responsible for the very dryness that made last summer's fires as extensive as they were. In the interest of full disclosure, however, I must mention that my blissful childhood visits to this same valley were made possible by the fact that my grandfather managed the Cottonwood power station for the City of Los Angeles Department of Water and Power, and I grew up next to this same aqueduct. My feelings about the whole issue are, therefore, complex.

For more complete accounts of the event itself, a semi-local account (from Mammoth Lakes) is available through Sierra Wave television, and here's the LA Times story.

My interest in this event rests not only in my attachment for the area (we often stay in the Winnedumah Hotel in Independence, and some of the photos I've featured in this blog have been taken nearby), but in particular in my family's fondness for the fish hatchery itself. If my archives were more organized, and my scanner working, I'd include here photos taken of my grandfather holding me on the steps of the main building, and a similar shot of my father holding my son. We like generational symmetry in this family. At any rate, I loved to take my kids there when they were little, and only a lack of time prevented me from taking Beloved Spouse the last time we drove by the road that leads up to the complex.

For visual background, here's a Flickr page on the aftermath of last summer's fire by an ichthyologist who calls himself "oncorhynchus," (there's something wonderfully coincidental about the fish connection here--maybe that's why he'd been in the valley) and a nice VR panorama of the hatchery grounds, before the slide.

So this is the lesson: some things that seem always to have been there, may not always be there, so we'd best not postpone visiting places (and people) we love. Nature has a way of knocking us on our kiesters every now and then, and not all of the messes that get made are made by us (both the fire and the mud-flood were caused primarily by natural phenomena; I say "primarily" because the real damage occurred to human-made structures, and the abnormal rainfall itself may reflect larger, human-augmented, climate conditions).

There does seem to be some irony to my writing this account on the day that the All Star game will be played in Yankee Stadium for the last time. Beloved edifices are hard to come by these days, and I hate to see any of them go. At least the fish hatchery's still standing. Maybe it'll be there long enough for me to get a photo with a grandchild--but I'm not counting on it.

Photo credits: Denise Flynn, from her Flickr photostream. Limited use Creative Commons license. Denise: you should visit your parents more often and take more pictures!
Posted by Owlfarmer at 7:57 AM