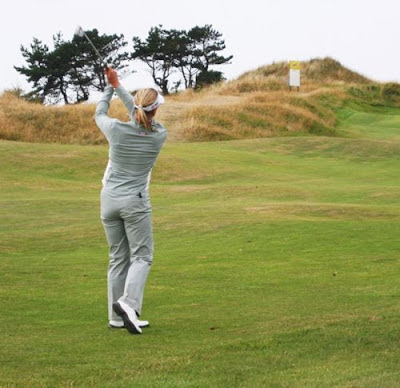 An overhead shot of the Royal Birkdale golf course in Southport, England, looks like a post-glacial landscape: swales and valleys amid gorse-covered dunes. It's a veritable topographical map of the game of golf, and an emblem for the true nature of the game. The photo is of Annika Sorenstam at the approach to the 10th green, during the 2005 Women's Open (the only shot of the course I could obtain legally).

The 2008 Open Championship is also being played on this dramatic stretch of British coast, where the English sand meets the Irish Sea, and it promises to be every bit as exciting as previous tournaments where I like best to watch the game.

"Exciting? Golf? Well, maybe, but Tiger's not there this year, so what's the big deal?" scoff the scoffers.

I'm afraid I'm a bit of a purist, and although I'll watch golf played anywhere, I've been known to refer to the way it's played on municipal golf courses around here in pejorative terms ("sissy golf" is one of the more polite). Maybe it's the Scot in me, but I prefer the wild, rugged, coastal links courses in Great Britain to any of the manicured pretty-boy courses in the U.S.

The wind and rain blow, the clouds lower, the bunkers are real traps, not baby beaches, and the water hazards can pitch a leader out of the top ten in a few strokes. In today's third round, the wind is the main factor, making it difficult for players to mark their balls on some of the greens. The sun's gorgeous, but shots of the sea give you a pretty good idea of just how tough things are going to be later in the day. K. J. Choi leads at the moment, and he's the only player under par.

So why am I yapping away about a game that I don't play (I think I've actually held a golf club in my hand once or twice) in a blog that purports to explore things philosophical? Because golf, like baseball, is metaphor writ large. In fact, I've sometimes shown The Legend of Bagger Vance in humanities classes, because of what it tells us about the nature and scope of myth itself. Based on the book by Steven Pressfield (who based it on the Bhagavad Gita, one of the sacred Hindu scriptures), the film (directed by Robert Redford) pits man against himself as he strives for meaning in lfe. As Bagger Vance (played by Will Smith) says about golf, "it's the only game in which you can call a penalty on yourself."

Golf, especially on a links course, provides lessons in a variety of skills I'd love to see my students develop: tenacity, concentration, patience, physical and mental stamina, fine-tuned technique, and adaptability. Grace in competition is a hallmark of the great players (Tiger Woods, of course, comes immediately to mind), but the real competition is between the player and his or her own mind. Young and old can compete in it; among today's leaders are K. J. Choi (38) and Greg Norman (53), along with Rocco Mediate (46) and Camilo Villegas (26) in the final two pairings for the third round. It's as much a mental game as a physical one, and a tournament can be won by both skill and will.

I was highly amused the other day to notice that the story line in the comic strip Judge Parker (choose July 18 and 19 on the link) is beginning to focus on golf, and that one of the characters is touting Harvey Pennick's treatise on life and golf, his Little Red Book. I've given it to duffers more than once, and it, like Bagger Vance, has as much to say about being human as about playing golf.

But golf is also about landscape, and especially on links courses, it's about nature's interaction with human design. To me, it's silly to see green grass in the middle of the desert (as in Las Vegas or Palm Springs), but the courses in Britain symbolize the human experience of adapting to the land. At the margins of the groomed fairways and greens lie the natural scrub, heather, gorse, beach grass, and other vegetation into which the course has been carved. The bunkers are cut into the underlying sand, and dug deeply to present a real challenge to the player whose ball wanders off the green or lands in one from the fairway. The weather in Britain also changes so rapidly that the character of play can be altered in a few minutes. As I type, the clouds are moving in from the sea, and the jackets are coming on in the gallery. 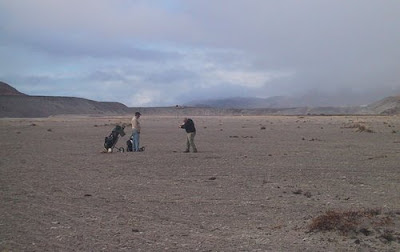 Golf can, in fact, be played under almost any conditions. The tougher the course and the weather, the hardier the folk it attracts. In More News From Nowhere, my characters play a form of desert golf, and folks apparently even play golf in Greenland (see above) in circumstances that must surely test one's grit.

I've never understood people who find precision-based games like golf to be tedious and/or boring. The character and skill of the players, and the battles of wills that often ensue, are plenty exciting for me, and watching the Open Championship gives me a chance to see talented human beings matching their wits against nature. Sports, for many, are tantamount to religious experiences, and it's easier for me to see this in Britain in July than at almost any other time of year--except, perhaps, during the World Series.

Photos: Annika Sorenstam at the approach to the 10th green at Royal Birkdale during the 2005 Women's British Open Pro-Am (modified), by Cath Mudford. Golf in Greenland (modified), by Graphicos. Both from Wikimedia Commons.
Posted by Owlfarmer at 7:56 AM

Great post! Like you, I've never golfed, though my husband and I always resolve every year to take lessons (it hasn't happened yet!). Anyway, I loved Legend of Bagger Vance--such a great film. And the photo of golfing in Greenland was great--I've never seen that before! Wow. That must surely be a test of one's prowess!