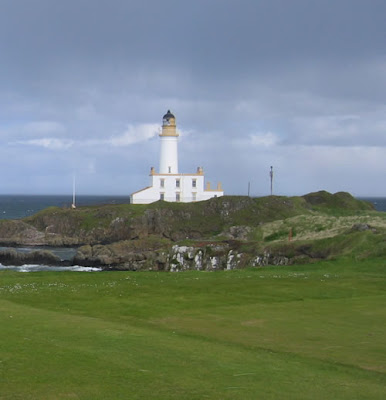 It's taking me a while to get used to my summer schedule--one afternoon class on Monday, then two morning and one afternoon gig on Thursday and Friday. Tuesday will be my on-campus day for administrative business, and Wednesday a mid-week buffer on which to prep for the end of the week. So it's not at all bad. No night classes for the first time in years, but two 8 am sections--which I also haven't had in years. I like morning classes, though. As long as I'm out of the door and on the road by 6:30, I don't hit much traffic, I get to see the sun rise, and I have time before class to settle in, have a cuppa, and get my "stuff" together.

All of this means that I'm not writing much. I'm hoping that on Saturdays and Wednesdays I'll have a couple of hours to devote to blogs and novels, but this weekend I've been distracted by lovely weather and, of course, the Open Championship: the best golf tournament there is.

Now, I don't play golf, but I love to watch it. Like baseball, golf is a metaphor for life. As I mentioned in last year's post on the subject, I used to show The Legend of Bagger Vance in my Humanities and Myth classes (it's based, in part, on the Bhagavad Gita), and my students generally loved it. I also used to link an essay about metaphor and designing golf courses to my Humanities resources, until it disappeared into the graveyard of old internet articles. I love the pace of golf, and the concentration and precision the game requires. Short attention spans won't do in golf, and especially not on links courses like Turnberry, where the Open is being played this year.

Like all Scottish links courses, Turnberry's a bear. The coastal weather can turn on a tuppence, and you have to have nerves of steel to play this course. And 59 year-old Tom Watson (although he began the final day with a bogey) is up there, in the final group because he was on top of the leader board when play ended yesterday. The pressure, even on a young guy, would be horrific, but Watson is hanging in there. Geezers rule!

I've often felt guilty for loving golf, because of the resources that go into maintaining them: water, fertilizer, weed killer, and such. But the focus in golf-course design and maintenance over the years has gradually shifted toward sustainability. One reason I prefer Links golf over the standard American groomed-course version is precisely because of the naturalness of the courses, but it does look like an effort is being made to address environmental issues.

Watching the championship is like watching Sunrise Earth. The coverage is full of drama and beautiful vistas of sea and sky, and the sand traps that can really be called "bunkers" on this course. There's even a series of commercial messages about the tournament, narrated by "Mother Nature." Few American courses can claim much history, but courses in the UK are rife with it. Turnberry was used as an air base in both world wars, and has the concrete scars to prove it. Still, it's magnificent, and rather amazing to see some of the best players in the world (including Tiger Woods, this year) defeated by combinations of luck, wind, weather, and the draw. This time around the patience and expertise acquired through decades of experience are coming in handy for Watson, but the young punks are beginning to surge, including Ross Fisher, whose wife can go into labor at any moment (in which case he's promised leave the course, no matter what his position), and the 16 year-old Italian amateur, Matteo Manassero.

Watson seems to be channeling the spirit of Old Tom Morris, one of the game's pioneers, who holds the record for the oldest person to win an Open Championship--in 1867, thirty years before my grandmother was born (she later married the grandson of Angus Campbell McDonald, the dour Scotsman who settled part of our family in the Owens River Valley), and I came along about 80 years after Morris's last victory. I make my connections where I can find 'em. Tom Watson won the Old Tom Morris award in 1992 for his contributions to the game. Alas, however, there seems to be no connection with William Morris. That would be way too cool.

It's early hours still, and the weather can come in and change things at any moment. So I probably won't be back at the computer until this afternoon, and then I'll be working on Monday's class. But if anyone wonders why a blog perportedly concerned with philosophical musings about place periodically wanders onto the golf course, it's because golf courses and the game played on them are so rich in a sense of "being there": in the moment, on the fairway, on the green, on the edge of a cliff that looks out on forever. This is how golf was meant to be played, and Scotland is where it came into its own. My ancestors probably played nearby, with old twigs and rubber balls. And with Tom Watson over there showing the young'ns how the game should be played, I don't think life gets a whole lot better than this.

Postscript: In the end, I weenied out, and cleaned the refrigerator instead of watching Tom Watson lose the playoff to Stewart Cink for the Championship. After two holes of teeing off into really bad rough, I didn't have the heart to see it through. But, as one of the commentators mentioned, Tom Watson's performance this week reminds us that golf is a game that can be enjoyed for a lifetime. The full range of ages from 16 to 59 showed us that energy and talent count for something, but so do skill and experience. The fact that Watson's loss was at the expense of Cink's dramatic, come-from-behind first win in a major tournament cushioned the blow. It was a terrific week, and Tom Watson's still one of the best things ever to happen to the game.

Image credits: The photo of the lighthouse at Turnberry is clipped from a picture of Alistair Nicol teeing off--apparently created by Nicol himself; Tom Watson at the 2008 Open Championship by Ian Tilbook; and Old Tom Morris his ownself, uploaded by StefanB. All from Wikimedia Commons.
Posted by Owlfarmer at 5:00 PM