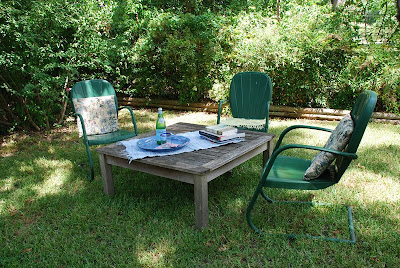 Yesterday I finally sawed the legs down on an ancient garden table so we could use it with my grandmother's old lawn chairs (the very ones on which she and I used to sit to watch satellites go by in the night sky on her front porch) in a shady portion of the back yard. To celebrate, I took a bottle of San Pellegrino out and a good book--Thomas Cahill's Mysteries of the Middle Ages, which I'm going back over to augment my illuminated manuscript and Romanesque/Gothic lectures--and sat reading under a pecan tree: the one now minus a very large branch.

By early afternoon the sun has risen over the tree so that for the rest of the day there's shade on the "new" table, which is also situated to allow us to hide at night from the gigantic street light in the alley directly behind our property. Next to the table is a large Rose of Sharon bush, and it provides a nice backdrop and a great place for reading in the afternoon--even when the temperature's around 103, which it was yesterday.

Cahill's book may not be your average summer reading choice, but it's the kind of thing I really enjoy because I can read it whilst being distracted by the antics of birds and squirrels and the occasional streaking across the yard that the dogs do once they've rested after the previous squirrel chase. When Beloved Spouse and I went to see Pixar's Up!, you could tell who in the audience had dogs, because we all laughed uncontrollably when the "Squirrel!" prompt led the dogs in the movie to go screaming off after the promised prey.

For the most part, though, I spent a peaceful afternoon reading about Hildegard of Bingen, the twelfth-century nun, mystic, artist, natural historian, composer, and (eventually) saint, who was my real prey. And I was rewarded for my efforts by Cahill's discussion of what Hildegard called viriditas. He describes it as "greenness or greening or springtime" and notes that she saw it as a mark of good people. The source of her fondness for the notion stems, according to Cahill, from her own experience of the natural world:

There can be no question that from childhood viriditas had poured from the forested ridges and clear waterways of the wild Rhineland, impressing itself on the sensorium of a lonely child. Her scientific works are replete with what can only be personal observations of local animals, fish, and plants. For the local rivers--the Glan, the Nahe, and the Rhine--she catalogues thirty-seven species of fish, giving us evidence that, if she didn't do a lot of fishing herself, this nominally cloistered nun must have talked at length to an awful lot of fishermen. (85)

Notice, please, how I'm resisting the cheap joke about soon-to-be-former Alaska governors. Anyway, Cahill goes on to discuss the fact that Hildegard further associates viriditas with women, particularly her fellow nuns, in charge of running the cloister gardens, themselves "flowering virgins."

Nature and springtime have long been associated with the female--Gaia, Mother Earth, Primavera (the personification of Spring)--but I hadn't run into this particular term before I read Cahill's book. Hildegard's characterization of an essentially feminine virtue provides a rather lovely way of thinking about things green, and about the idea that sustainability is actually grounded in a virtue that could easily be called Viriditas--as a companion concept to Veritas, or Truth, herself the mother of Virtue in Roman myth. I had notions of truth stamped on my blossoming brain early on (I was taught by Dominican nuns, who are not cloistered, but whose motto is "Veritas"), but Veriditas was taught me by nature herself, in the hills behind our house in Taiwan, in the landscape of Japan, in the deserts of California, and here on the prairie in Texas.

It would be good, I think, to balance ideas of what is right with ideas of what is good in nature; if love of nature were taught as a companion virtue to truth (in whatever philosophical guise one understands it), imagine how much easier it would be to think of living well on the earth as the right thing to do.

Alas, interest in language and linguistics diminishes daily, in part because our public priorities lie not so much in the words we use to describe what's going on in the world, but in trying to figure out what to do about it. So finding a good word to describe a laudable virtue isn't likely to attract much attention. But it's a good word to have, and in Hildegard's sense, not a bad virtue to possess either.

Image: The new old table with the old old chairs in their new location.
Reference: Cahill, Thomas. Mysteries of the Middle Ages and the Beginning of the Modern World. New York: Anchor Books, 2006.

Posted by Owlfarmer at 9:54 AM

I love your new outdoor table -- my father cut the legs off a found "coffee" table of weathered wood for my mother, she painted it a rustic green and fitted it with a glass top. It was gorgeous!

Your relaxation area looks divine in your backyard. ;)

Enjoyed your discussion of Cahill's Hildegard and her notion of viriditas. Very interesting indeed. I like the association with "veritas".

(Enjoyed your prior posts re: the individualist response to the problems plaguing our earth and what will fall on the shoulders of the next generation.)

We also saw Up! and thoroughly enjoyed it - since we have dogs, we also loved the parts when they yelled "squirrel!"

Thanks for stopping by, Oz Girl. I miss the crowd from Skywatch Friday, so will try to post a photo soon--if we ever get something interesting again. I imagine the skies up in your neigborhood are pretty blue, too. Thanks also for the comments. It's nice to know somebody besides me actually reads this stuff!

Actually, I haven't posted to SkyWatch in a few weeks myself. I think it was getting stressful to keep up with it all, and that's not the purpose of my blog (stress). So I decided to forego SkyWatch and a few other photo memes for the time being, and join up when I feel like it.

More food for thought, you do keep me on my toes. I did check out the forum on Derrick Jensen's article, some interesting thoughtful comments there. I didn't enter into the discussion as I have been busy railing against the budget mess here in Califronia.
I have been thinking of cutting back on the memes but it does lure folks in for the occasional post of substance. It also introduces me to like minded people which can be hard to find in this, the most heavily Republican county in the state.

Owl - I went with a friend to her high School after it was closed for the season to help her reorganize a ceramics studio there. it saddened me to see that the school apppeared as an abandoned factory, ringed with dying grass and languishing ornamental trees which, instead of "greening" the space or making it appear more human-friendly, threw into awareness what a life-diminishing atmosphere reigned in the place.
There is a pretence of valuing education in such an atmosphere - no coherence of belief with action. How can a society "educate" the young to embrace life enhancing knowledge of the world we live within, inside an environment designd and built on an industrial model?
I know there are moden-era Hildegard Von Bingens around us with similar passions but there should be armies of them propelling the idea of Viriditas
and changing how we educate our newly born young.
I have always been an idealist, and even at 63 years of age i keep hoping. G

Maybe it's our age, GEM--we're old enough to look back and appreciate what many of this generation don't even see. Some can get through to a grandchild; I take it out on my students and sometimes see a flicker or two. For anyone who wants a taste of the Hildegard experience, I recommend the album, 11000 Virgins by Anonymous Four. Their website is at http://www.anonymous4.com/11000top.htm