Who Knows Where the Time Goes? 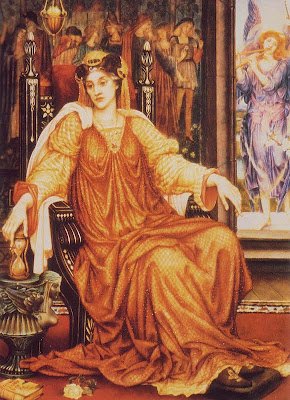 Maybe it's my advancing age, but I suspect that my current discomfort with the space-time continuum has at least as much to do with the way the modern world works as my having just become eligible for Senior Citizen discounts at the local bijou.

Time was (as they say) when folks thought that vacuum cleaners, automatic dishwashers, and such "labor saving devices" would add to the amount of available leisure time and make us all happier, healthier people. I'm not quite sure what the proponents of these adult toys thought we'd do with that time, but I suspect (in retrospect) that it had something to do with having more time to shop for more adult toys.

I do have a vacuum cleaner, although I'm not happy with the way it works, and I'm not sure it saves me all that much time. A carpet sweeper and a broom are lighter, and although they don't do the "deep" cleaning that hoovering is supposed to accomplish, I suspect that taking my area rugs out a couple of times a year and beating the bejeeziz out of them would do the same thing.

I've only had a dishwasher once in my life, and it took every bit as much time to prepare dishes for automatic washing as it did to do them by hand. In those days the machines also used more water than hand-washing did. I understand that that's no longer the case, and that one doesn't have to pre-wash everything. Still, about the only advantage to having one seems to be that it gives people somewhere to hide their dirty dishes. But both Beloved Spouse and I find dishwashing to be soothing (and, in winter, hand-warming), and there's nothing quite like a kitchen newly cleared, wiped down, and at peace. Some of my best memories involve conversations with my grandmother at the kitchen sink, washing up after a family meal. The only dishwashers she ever had were her children and grandchildren.

But this isn't really a rant about products. It's about truthfully wondering why I seem to have so much less time to do things I love, like gardening, reading, writing, hanging out in the Carbon Sink with the puppies, and home-keeping.

When I started writing Owl's Farm two and a half years ago, I managed to sit down for several hours a week to work on posts--and eventually to divide the content into three separate blogs. But something has happened between then and now, and I'm beginning to wonder if my internal clock wasn't knocked askew while I was under the knife last spring.

I also wonder if illness isn't more conducive to thinking than health is. When I couldn't run around like a fool, chasing my own tail or fighting fires for others, I frequently managed to think about what needed doing, and then to make a stab at doing it. I actually managed to fix up a couple of rooms in the house last spring, even while my aortic valve was narrowing down to a pinhole. But now that I'm bionic, its as if time itself has narrowed, and I don't seem to have nearly as much of it. As soon as my leave was up, only six weeks after surgery, I was back at it in full force. The summer slipped away so quickly that I can't remember what happened. Now that it's bitter cold, I can barely remember the heat.

The winter holiday positively thundered past, leaving me reeling in its wake, and bereft of two weeks I thought were mine in which to relax and take it easy. I wasn't even caught up in any particular rush, because our holiday events included only our daughter's annual overnight stay on Christmas eve, and a leisurely afternoon dinner. No big New Year's bash, no parties, no mad dashes to malls, very little shopping. But my two-week holiday was over last Monday, to be replaced by meetings and course preparation, some of it valuable, some of it useless.

Perhaps it's because I'm reading Morris again. I'll be teaching him this quarter, in particular his essay on Useful Work vs. Useless Toil. Re-reading it frequently makes me wonder about how much of my time is taken up in doing things that some higher education guru thinks is necessary in order for me to do my job well--but that end up producing nothing really worthwhile. It's not that I mind creating lesson plans and making sure that I'm delivering information and sharing ideas in such a way as to promote real learning. But some of it deprives me of time to read and think, which is where my expertise originates. It's times like this that I long for the way my utopians learn in More News From Nowhere: by talking and doing, rather than taking tests and being graded.

The topic of assessment and modern modes of teaching will undoubtedly be dealt with energetically over this next year in The Owl of Athena, because my college is merging with another and will be undergoing another round of scrutiny by regional accreditors. But for now I'm trying to figure out how I'll have time to prepare for any of that, if the minutes keep flowing by at light speed.

I long for languor, relishing small moments like this one, when I'm sitting by the fire on a very cold morning, laptop on lap, writing and musing. Last year at this time I was wondering if I'd make it to another new year, and now that I have, it's up to me to wrestle my time back so I can enjoy the greater number of days now available to me. So I'll quit whining, and when the fire dies down, I'll go out into the bare winter yard to take the frost-covers off the rosemary and lavender plants. The afternoon will be a good deal warmer, so I'll let them breathe and enjoy the sunshine. Then I can come in and start a stew simmering, pour a cup of good tea, and open a book.

I'm pretty sure that's when time slows down: when we stop the clock ourselves and refuse to let modern life take over. This seems like a plan, actually. Were I one to make resolutions, this would be it: not to "waste" or "spend" or "save" time as if it were a commodity, but to just take it and live it and let the other stuff go. This is, I think, why the Sabbath was invented.

Good plan. But we shall see.

Terrific post. Someone, sometime needs to study the correlation to aging and time acceleration. It seems to me to be a fixed constant in the universe!

I also entirely agree with your points about dishwashing. Being single I don't have a lot of dishes anyway, and it's a manageable chore for me. When I was a kid washing dishes was one of the things I did to get through school so I guess I have a soft spot for it.

That said, many of the machines we supposedly "need" aren't of much use - but many are. I guess the trick is to know the difference.

You're absolutely right about knowing the difference. I would, for example, use up more of my time without a microwave oven--and it's actually far more energy efficient than heating stuff up in a conventional oven, especially in summer. But I also periodically launch domestic experiments that involve doing without one convenience or another. I didn't have a clothes dryer for the longest time, and now that I have one I try to limit my use of it to days with inclement weather or when there's just too much laundry to line-dry effectively. Still, it's a handy gadget to have when we have summers like this last one, where it rained for the better part of a month.

It is interesting how time seems to speed up the older we get.

There is also a tendency to anticipate an event in the future and not live in the moment, I'm trying to avoid that trap.

When we lived in DWP housing of course I had no dishwasher and I didn't find it a burden. When we returned to LA after 15 years the dishwasher in our old home had broken. My dad decided I needed a new one and bought it for me so I fell back into the use. Now, though, I find it a perfect activity when listening to All Things Considered.
In this I think Thoreau was right, live deliberately..