Skywatch Friday: Hiding in the Garden 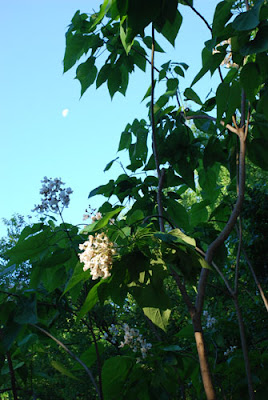 This has been such a bad week for the environment that I've found myself spending every spare moment in the garden. What was once the Accidental Garden and then the Carbon Sink is on its way to becoming a full-fledged, small-scale forest--although we will probably manage it in somewhat the same way that the Germans do theirs. We bought a scythe (not the curvey kind, but the back-and-forth swinging kind that isn't built for short folk and requires the wielder to wear long pants and sturdy boots) for dealing with tall weeds, and will continue to pick up fallen branches. But mostly we'll let it go. At least until we find an old Shasta Airflyte trailer to tuck in there for a guest house.

The true reward is in the air. All the smelly stuff is in bloom: honeysuckle, privet, jasmine, roses, Chinaberry, catalpa. The scent is absolutely intoxicating, and I'm not a great lover of perfume. I cannot abide women (or men, for that matter) who marinate themselves in cologne and then make me breathe it. But when it's a natural component of spring air, I'm a devotee.

Even with all the sources around me, though, nothing overwhelms. One has to breathe deeply to really get it in the lungs; otherwise it simply wafts by, begging noses to follow. And even though the mozzies are already out in full force, it's well worth sitting out with a glass of wine. When the temperature rises just a bit (as it promises to do by the weekend), the night-garden will also light up with fireflies as soon as sunset begins, and the combination is simply magical.

The only way to improve things would be to add lilacs to the mix, but (alas) they don't grow well here, and I'll have to do with the jasmine on the front porch for heavy-duty fragrance.

Yesterday morning I went out to do some veg-drenching (putting Garrett Juice on the cucumbers and tomatoes), and caught the mist on the wild gladiolus plot (they're naturalizing like crazy and are taller this year from all the rain) as the sun rose over the fence. 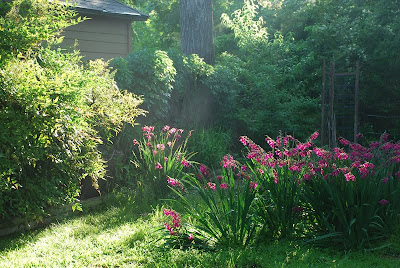 The first crop of baby sparrows has completely fledged and been kicked out of the nest, but even though they're as big as their parents, you can tell who they are because they raise a ruckus, fighting over food that mum and dad are still catching for them. I saw one mother get tired of it all and enjoy a nice fat caterpillar herself when she couldn't figure out which one of her noisy little brats to feed.

The little Shasta Airflyte bird house my daughter bought me for last Mother's Day is occupied (despite its new location adjacent to the recently-planted heirloom tomatoes, and thus next to a great deal of activity), but there are no signs of squawking babies from its interior yet. I'll actually be surprised if anything hatches, but it's still fun to watch the potential parents stuffing the interior (the hole is on the other side) with bits of straw and fluff.

One of the first apps I bought for the new iPad (yes, we did succumb) was a bird ID with sound clips to help me figure out who's who when I can't see the singers of the songs. But I'm also looking forward to sitting out with the new machine and our portable WiFi unit to use some of my bookmarks out "in the field." I'll have to check to see if a compatible e-book of Peterson's or the Audubon guide are available, too--so I can build a virtual bird education unit to carry about.

Last evening the Beloved Spouse and I were sitting out with iPad and binoculars, trying to figure out what I'd been watching high in the trees lately. Thanks to the yard bird app, we were able to determine that it's probably a Phoebe, particularly notable by its habit of flying out and back to the same branch. This time it was the behavior, rather than its looks, that helped us out.

The backyard life and death drama continues, too. This morning, whilst romping with the pups, I discovered a dead fledgling Cedar Waxwing--about the only way you can catch them up close. Its lower parts were still a bit spotty, but it was pretty much full grown. Since they don't feed on the ground (so the dogs didn't get this one), I wonder if our marauding hawk had dropped his dinner.

This week's Skywatch Friday entries are all scented trees against the sky, except for the one shot of the morning mist. I haven't posted for a while, and will get back to the dismal news at the weekend, but for now, I'll enjoy my day of working at home, sitting in the garden, and hiding away from the world--and visiting other peoples' skies vicariously.

Happy Skywatch Friday, and thanks again to the team for running the show.

Image notes: the opening shot is of the volunteer catalpa tree growing next to the driveway, with the moon in the background. The other sky/tree encounter features the Chinaberry. Both Chinaberry and catalpa are considered by many to be trash trees, but I love them. My grandmother and her mother both nurtured volunteers in their yards, and I'm carrying on the tradition. The Chinaberry reminds me both of Italy and Taiwan, so it's a permanent member of my little forest.

Posted by Owlfarmer at 7:15 AM

That birdhouse has to be the most adorable thing I have ever seen, as far as birdhouses go (:

Thanks for this lovely post! I am deeply depressed about the oil spill too, and it's nice to read about you carrying on in your garden!

A lovely post indeed and like you, I am so depressed regarding the oil spill. Such a tragedy! So, seeing/reading about the beauty of your garden and trees is a light in the darkness! Have a great weekend!

Loved your Shasta photos/post. I worked in the rv industry for about 10 years and can appreciate the work you did.. Happy camping

'Fraid I can't take credit for the Shasta job, Joe--it wasn't mine. But I, like you, much admire the work. The re-do was completed by a guy in Ottawa, whose blog is available here: http://web.mac.com/thomasinlanglands/iWeb/Site%205/Blog/Blog.html

Your private little forest sounds delightful and is obviously a haven for wildlife. We never object to happy visitors of the plant variety either. The birdhouse is wonderful - I've never seen anything quite like it.
Thank you for a new word to add to my vocabulary - would the adjective be pareidoliac?
I hope a solution can be found soon for the oil spill in the Gulf of Mexico. It's horrifying to realise that crude oil is still pouring out. The weather hasn't helped with efforts thus far, I understand.
Meanwhile, enjoy your little Eden and raise a glass to the fortitude of Mother Nature.