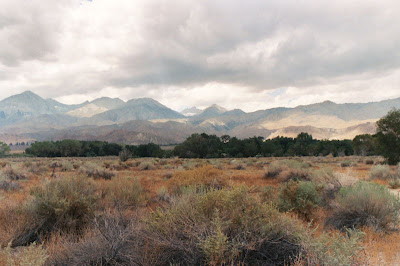 I regularly scan the New York Times online edition's science section because there's seldom any science news that doesn't stir my imagination in some way. I check the food section for similar reasons. But this morning I ran across a story that perked me right up, about a new California earthquake map that outlines faults in pretty colors.

Of particular interest to me and mine is the fact that the Owens River valley is a veritable rainbow of fault activity, a great deal of which has occurred within the last 200 years. My home town, Lone Pine, lies at the confluence of more than a dozen faults that have generated displacement over the last 700,000 years, and more than half of which have been active within historic times.

The best known event occurred in 1872, about thirty years before any of my family moved into the valley. It was notorious for teaching inhabitants a little something about how to build in seismically active territory: wood-frame buildings survived, but adobe crumbled. According to W. A. Chalfant's account in the Bible of valley history, The Story of Inyo, adobe was the architectural material of choice, since appropriate wood was expensive and scarce (260). Even the fired-brick courthouse in Independence fell, and was replaced by a wooden structure which burned down in 1886.

The current edifice was completed in 1921: a lovely Neoclassical revival building with an Ionic temple-porch at the entrance. It sits right across US 395 from the Winnedumah Hotel (also built in the '20s), where we usually stay when visiting the area. The courthouse makes a fine sight for viewing with one's morning coffee. 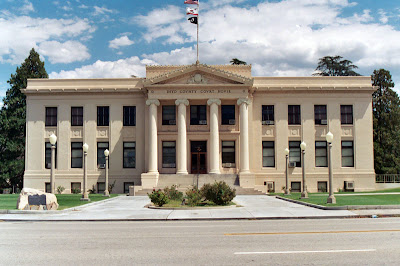 The 1872 temblor altered the landscape significantly, but its most visible effect is Diaz Lake--the town's major recreation facility--and a scarp line that's visible (on and off) from the grave-site of the twenty six victims all the way up to Big Pine. On the last trip I made to the Auld Sod with my father, he showed me the spot where the scarp ran across the family's old property, and where the land dropped about ten feet overnight during a later earthquake. It's roughly outlined by the treeline on the photo that opens this post, which was taken from the back of the Robinson property in Big Pine, where our family reunions are held.

Were it not for earthquakes, of course, the valley itself would not exist. As part of the Basin and Range Province (eloquently described by John McPhee in his book, Basin and Range, which my husband and I have read aloud to each other on trips west), the Owens valley is one of the westernmost examples of where mountains have emerged and valleys dropped along the edge of the American plate. The mechanisms are complex and brutal, but they're responsible for producing the gold and silver and other ores that fueled the population of the west.

The more recent history of the Owens valley includes the effects of Pleistocene glaciation and the development of a drainage system that more or less ends with Owens Lake. This accounts for the concentration of heavy metal particles in the lake bed that, when it dried up, blew out of the valley and threatened the lungs of Angelenos in the south. During my entire lifetime a struggle to get water back in the lake has been waged, and only recently have wetlands been re-established, thanks to the Lower Owens River Project. The resulting increase in bird populations and variety is astounding, and when fellow blogger Martha posted pictures of pelicans flying above Lone Pine in her Skywatch Friday entry last week I was profoundly reassured by what these birds represent. (A tourist captured a similar flock in March of 2008 at Diaz Lake and posted the video on YouTube; try to ignore the commentary.)

Nothing in the valley is permanent, of course. The very convergence of faults that appears on the new map assures us that flux is the norm rather than the exception. I rather enjoy postulating a future for the valley (it's the site at which most of my fiction takes place), using all the bits and pieces from geological history that come my way. Thus, I have a feeling that the map will inspire a story or two--perhaps this afternoon when I retire to the back yard after a slog on the computer, in a place where most of the local seismic activity comes from energy companies' drilling for gas in the Barnett Shale: an indication that human beings really aren't very good at learning lessons about geological processes.

Notes: The photo of the Sierras from Big Pine (with a the Palisade Glacier peeking through) was taken during a trip to the annual Labor Day family reunion in 2002. I shot the courthouse from the Winnedumah Hotel, where my kids and I stayed while we were in the valley during the same trip. The glacier, alas, was nearly gone the last time I visited, in 2004. The reference to The Story of Inyo is to the first edition (1922), inscribed to my father by my grandmother, and punctuated with his notes. A .pdf file of the same edition is available at the link, above.

Posted by Owlfarmer at 6:54 AM

I always enjoy your commentary on the valley we have both called home.
I took a look at the video and though it might have been nice to hear only the wind, the excitement they felt at the sight mirrored my own.
I do recall seeing an occasional pelican at Pleasant Valley and they are quite common up at Topaz. I wonder where this mob was headed.