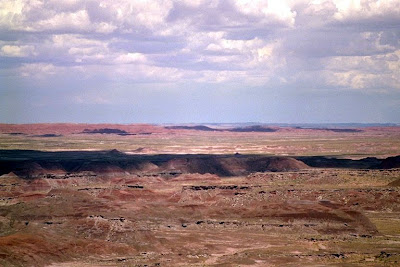 Most of my musings over the last few weeks have taken place among friends and colleagues, all of whom are noticing the rapid passage of time and tide. I was beginning to think that I was alone in lamenting the loss of what now seem like copious amounts of free time--moments that used to allow me to post more than once (on more than one blog) per month, and when I used to be able to sit in the garden and simply enjoy a few minutes of pleasant lethargy, watching butterflies alight on blossoms, raptors gliding aloft, squirrels pilfering seed from the bird feeders, and "puppies" lounging in the shade after a hard romp--without feeling guilty about not doing something more "productive." But others report feeling the same way, as if we've lost something important.

One reason I'm not posting much these days is that I don't have anything particularly helpful to add to political discussions going on in Washington and/or in Austin. Mostly they're not really discussions at all--more like bickering and spouting. I'm quite simply tired of it all, and thoroughly disgusted that people of all flavors seem to have lost any notion of common sense, common purpose, or common good. I'm too dispirited to rant; I lack the energy necessary to compile cogent arguments in favor of anything. I simply delete pleas that appear in my mailbox to contribute to any conversations, even those from groups like No Labels that are actually trying to do something to ameliorate the situation.

I've turned my efforts toward the tiny things I can actually do, like put together more interesting discussion topics for students in hopes that at some point in their lives they will become concerned about some of the big questions I've been pondering most of my life. I've actually put in a garden this year, too, with some vegetables (eggplant, beans, squash) in addition to the usual tomatoes, peppers, and herbs. I expanded the portion of the back quarter acre devoted to food crops, with plans for further expansion for fall plantings in the now-trimmed Carbon Sink. The former "accidental garden" has been shorn of some of its volunteers, and the wood will be harvested for projects and mulch.

As the puppies age (they're now seven, officially "senior" according to our vets), they're beginning to slow down, too. Woody now has arthritis in his hips, which recently required doses of NSAIDs and the addition of very expensive supplements for the rest of his life. So far Arlo is doing fine, but because he's long and low, we anticipate back problems for him in future. The three of us get out into the garden to "work" more--I with the planting and digging, they with the squirrel-chasing and protecting me from dangerous babies strolling by--if I don't write. What free time I actually find seems now to be spent out of doors, except when I'm driven in by loud music or noisy lawn equipment.

I guess this is really what's going on: a change in priorities. Whereas during the last four years of messing about in the blogosphere and thinking on digital paper I've had the chance to locate my philosophical core (sustainable economies), I appear lately to have reached a plateau. I don't seem to need to get it all written down, although I still appreciate having recorded some of what's been going on and being able to go back and see where I've been. As life winds down, though, and memory gets less and less reliable, priorities seem to be shifting to the immediate: what's happening this week, today, now.

The irony involved here is that for years I've practically berated my students for not thinking past the moment, for not planning ahead, for not investing in the future. They're so totally involved in the local, personal, and immediate, that they develop only vague notions of what all their hard work is leading toward. Instead, the songs playing on the iPod, the phone call or text message interrupting my class, the inevitable call to the restroom after consumption of an energy drink--all these take precedence over everything else.

Perhaps the common ground between the old and the young lies here: in the realization that the moment really does count. That we can't spend all of our time planning for the future or yearning for the past.

My sweet, gruff, funny brother-in-law, who spent several years waiting for a heart transplant, died this last weekend, only a couple of years after he'd received his new heart. He was only sixty-six, but in the last fifteen years he seems to have packed in more living than most of us achieve in much longer lifetimes. I don't think he spent much time planning very far beyond the next day or two, and over the years I've watched him savor life with abject appreciation for what time he'd been given.

I think, in the end, I'd rather spend my time in the garden, savoring days like this one, clear and scrubbed clean by last night's storms, than keep fussing over things I can't do a rutting thing about. Thanks for the lesson, Dennis. We will all miss you.

Image notes: this is a photo I took with the "wet" Nikon during one of our last trips to California by car, in 1999. On our way back from Porterville, we took the Death Valley Road out of Big Pine and headed back east. While remembering Dennis this week, I thought about this trip because he had lived with my sister-in-law (who has managed several refuges for the U.S. Fish and Wildlife Service) near Porterville, and they had met in Pahrump, Nevada, not far from Death Valley. It seemed like a fitting shot, both for the topic, and for Skywatch Friday.
Posted by Owlfarmer at 7:49 AM

Labels: death, life, now, the past, the present

I want you to know that I always read your blog, then go away and think about it, then come back and read it again. This post (at first reading) had me nodding my head in agreement at several points. You are right, there seems little that we can do when everyone is already yelling at each other--what's another voice, after all, when added to all the cacophony? Perhaps the answer is to recharge our batteries out in the garden, doing--as you say--what we can to make a difference there, at least. Maybe after some reflection we will find a way to make some sense of it all and find the things that will make a difference.

Totally OT but my family lived for awhile in Wrightwood and I would spend the summers up there roaming the little village. We often would go back to La through Big Pine. I have a love for the pine trees there. You could stick your noise in the cracked bark and smell vanilla. My grandmother taught me that.
I love reading your stuff.