The Precept of the Teacher 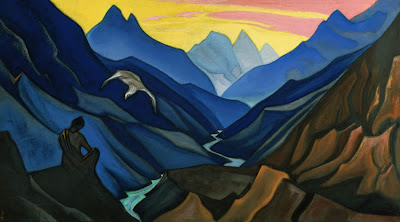 The other day, during a Library Committee meeting, one of my colleagues used what's probably an old saw by now (the toilet paper analogy) to characterize the way time works on old folk: the closer you get to the end, the faster it goes. The perceived phenomenon of the increasingly rapid passage of time has been weighing on my mind much of late, because there never seems to be sufficient time for getting done what I'd like to.

So I haven't posted on any blog in nearly a month, and am seriously thinking of bundling everything except the Parliament back under the aegis of the Farm so that I don't feel so much pressure to compartmentalize my musings. I'll probably end up using the others as an archive and--at least until I'm not teaching as much--restrict my efforts to the original focus.

A new quarter has started, with a fresh batch of students (the one class of mostly "old hands" doesn't meet until Friday), along with yet another massive effort to keep them engaged. Oddly enough, my two 8 am classes are, so far, the most enthusiastic and vocal, making it easier for me to muster the energy to embrace the educational cheerleader roll my job requires even when--as is the case on Wednesday mornings--I've only left campus at 10 pm the night before.

For many years my pedagogical philosophy has involved emphasizing common ground as a means of connecting with my students. I use translation as a model for teaching, so finding out what my students know that I know (and vice versa) is part of my engagement strategy. But as I told them yesterday, it's now easier for people of their generation to connect across cultures and continents than it is for my generation to connect with theirs.

The advent of social networking media has created a web of interaction among young adults who share interests in popular culture that transcends national boundaries. But because many in my Boomer cohort find it extremely difficult (if not downright impossible) to embrace various aspects of that culture, the gap can often broaden into an unbridgable crevasse. In my case, unless I've got a class full of science fiction geeks or Miyazaki fans, I have to work really hard to locate areas of common interest and knowledge. They just don't know what I know--and not all that many of them really want to.

It does help that we're at least all designers, and that I know some stuff that they will eventually find helpful. They seem to appreciate my sense of humor, and my acknowledgment of my own shortcomings, but keeping them with me for the entire eleven weeks gets harder and harder every quarter. It seems to me that at this point in my career I shouldn't have to work quite so hard, and I should have more time to just enjoy getting old. Shouldn't I be resting, Buddha-like, on my laurels or something?

And this is probably where the time-perception problem originates. Between every quarter I now spend a considerable amount of time going over old lesson plans and presentations to freshen them up and integrate new material I've discovered that looks promising. Education, as I've often preached, is an ongoing process; so if I keep learning stuff, chances are I'll be able to keep the small parcel of common ground from eroding completely in a world that seems to share my values less and less.

A footnote of sorts: As I was looking for an image to illustrate this post, I typed a few keywords into Wikimedia Commons, starting with "crevasse" but ending up with "teacher." The latter led me on an interesting quest to locate the painter whose work I used. Not realizing initially that "Nicholas Roerich" was the anglicized name of the Russian painter Nikolai Konstantinovich Roreicha, I spent some time transliterating his Russian name from Cyrillic into Roman letters and looking for some information on him. This took longer than it should have, but I was rather well rewarded in the end. Roerich died the year I was born, this was his final painting, and I'd never heard of him. However, the discovery does seem particularly fortuitous, given the focus of this post.

According to the biography on the Nicholas Roerich Museum page, the painter "constantly sought to connect ethical problems with scientific knowledge of the surrounding world. . . It was Roerich's gift that these 'connections' appeared so natural to him and presented themselves in all life's manifestations. And it was this talent for synthesis, which he admired in others and encouraged in the young, that enabled him to correlate the subjective with the objective, the philosophical with the scientific, Eastern wisdom with Western knowledge, and to build bridges of understanding between such apparent contradictions."

On the Wikimedia Commons page from whence I pinched the image, the title of the painting is listed as "The Precept of the Teacher," although the museum page calls it "The Command of the Master." "Command" doesn't make much sense to me, but since I don't know much Russian, I'm not in a position to question either translation. But I like "precept" better than "command," and "teacher" better than "master." By using "precept" in the title of the post, I'm calling on its connotation of a "guiding principle"--in this case, nature. Roerich clearly possessed the same appreciation for montane landscapes that I do, and I find the image of the solitary teacher atop a peak to be especially evocative.

In the end, another lesson emerges. As I continue to lament the evident loss of curiosity among a growing number of students, the process of locating this image, and eventually discovering this artist, reaffirmed my assertion that not only does philosophy begin in wonder, but so does creativity.
Posted by Owlfarmer at 1:24 PM