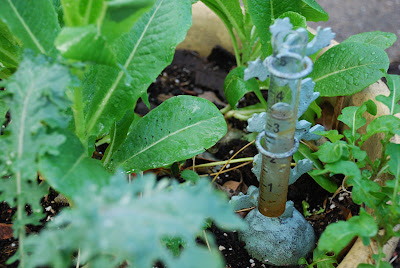 At the moment, I'm doing something I don't usually even attempt: multitasking, by trying to write and listen to the Rangers/Tigers ALCS game at the same time. The only reason I can be doing this at all is because I'm stuck at school after an 8 am-noon class that will be followed at 6 pm by another four-hour stint of stand-up art history. I won't make the 60-mile, hour-long round trip home and back in the interim, so I've been using the time for prep and--at the moment--trying to get some writing done. And since I can't actually watch the ballgame, I've got the audio running behind Blogger on my laptop.

The main reason I feel compelled to post at all is that we've had rain: nearly three and a half inches over a period of two days (with a short stint of sunny day in between). I'm not sure I've ever been quite so conscious of rain as a gift, but after this summer it's a bit like a cool soak in a bubble bath after a hot, week-long backpacking trip. Tomorrow I'll get to spend some time out in the garden, and the soil will be dry enough to take a bit of hoeing, but still damp and workable. My garlic's going in late, but I still have time for a small crop.

With luck I'll also have a little time for a real post this weekend. I need to reply to the two lovely, thoughtful comments last week's screed about agriculture, and there's more to say about growth in other senses of the word. I miss the Skywatch Friday crowd, though, so thought I'd share these snaps. The opener shows the rain gauge with the two-day accumulation. The other two are pretty nondescript, but they show what the sky looked like to the south (cloudy) and to the north (clearing) after the rain stopped yesterday morning. All three were taken with the Nikon D80. 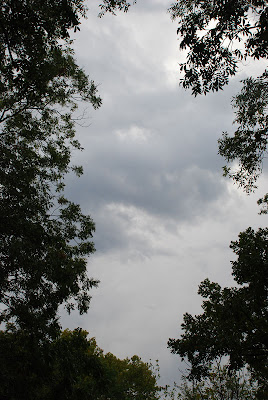 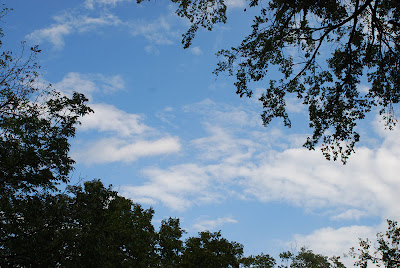 Back to the game. Rangers and Tigers are tied in the 6th. Have a good weekend, Folks.
Posted by Owlfarmer at 3:00 PM

Sky views with clouds are never considered non-descript here in the dry Southwest. Any rain is worthy of celebration, and I always go outside for a little dance in it. If the rain comes at night, I wake immediately and stand at the window breathing in the lovely fragrance.

In my younger days in damper climates, I would never have been able to predict the way rain has come to be equated with magic to me.

Three and a half inches is cause for much excitement. You are lucky; that's the total amount we have received all year so far.

We had a couple days of rainy days here too last week,it is still exciting to greet the rain on the first really chilly morning of Autumn!
The joyful weather did not last long though,we are just cooling down to 91 today after three days of 101+ highs,I really hope these are the last of the roasting temperatures this year.
Garlic would be a great thing to grow here,I may give that a try next year. I am looking at a variety of plants that will not need too much attention from me to populate the raised bed I am putting in over the Winter!

of course! a raingage fits into the skywatch category :) very clever lateral take
and what a pretty one it is too

Nice that you had some time to contemplate:)

Thank you for the visit.