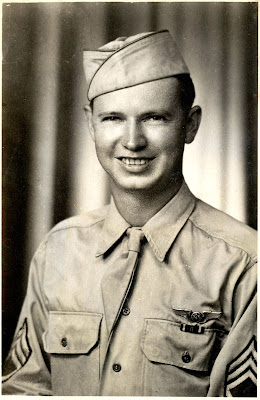 It's been nearly a month since my last post; things have been absurdly busy, confusing, and difficult to juggle, and I just haven't had the steam to even think about writing. But today is Veterans' Day, and I've been thinking of my father and other kin who've fought in wars or supported personnel who did. My daughter e-mailed me earlier today asking if I had any photos of her grandpa Tom in uniform, so I thought a post would present an opportunity to share my favorite. The above image was probably shot during or shortly after WWII, when Daddy was still in the Army Air Corps (at least that's what the wings indicate). What a handsome kid he was!

As I've undoubtedly mentioned many times on the Farm, my family's military roots run deep. Somewhere I have a letter from the Civil War, and there were Revolutionary War veterans on my Mother's side. Both of my grandfathers were involved in WWI, and I received a La Verne Noyes college scholarship on account my being a direct descendent of a veteran of that war. My father's war career spanned WWII, the Korean Conflict, and the Vietnam War. My brother fought in Vietnam as well. One of my mother's cousins was killed on the USS Arizona at Pearl Harbor, and my nephew was stationed on the USS Ronald Reagan in the Persian Gulf. The connections spread through three branches of the service and through three centuries of conflicts.

Although war is one human activity I would be glad to see end in my lifetime, I regretfully doubt if anyone ever will. Utopian dreams frequently envision its absence, but that single condition is what makes the word "utopian" synonymous with "dream" (or even "fantasy") in many minds.

But there is one positive aspect: even as it brings out the worst in some, it also stirs others to the most valiant of actions and the most selfless of acts. It enables men and women to embody the notion of honor in ways that no other endeavor allows, whether its causes are just, reasonable, or even sensible--or not.

I wish that whoever reads this post would spent a few moments today honoring the memory of those we have lost to war, those who have endured it on our behalf (including many of my students), and those who continue to serve. Were I able to hold only one hope for the rest of my life, it would be that at some point in a future not too distant, their service would no longer be required.
Posted by Owlfarmer at 10:00 AM

Great Photo! I too have so many service members on both sides of my family spanning from the Revolution to the war in Afghanistan. I lost a cousin a couple of years ago who served in Iraq & another who was on the Arizona on that fateful day in December 1941. I have always abhorred the need for war, but I have appreciated & respected those who serve or have served our country in peace & war time.